Justice will Rupture the Mountain- The New Yad Vashem Museum 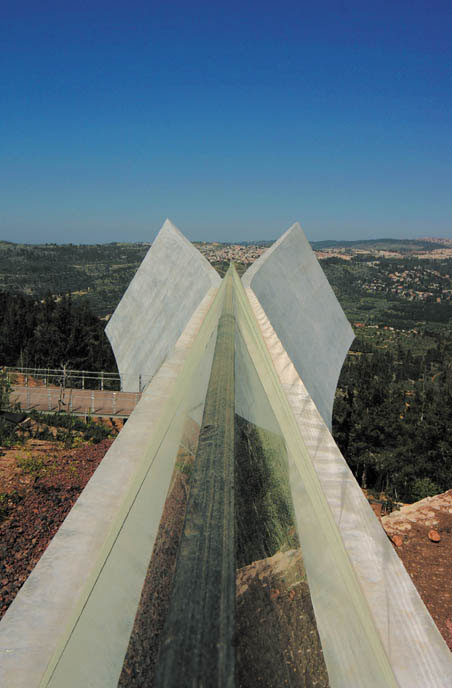 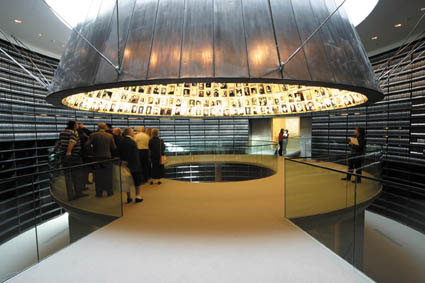 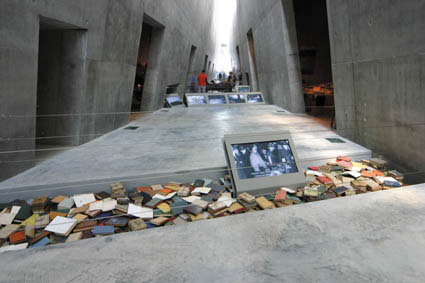 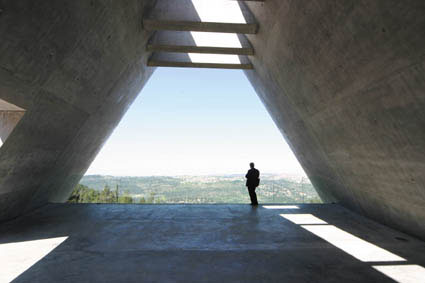 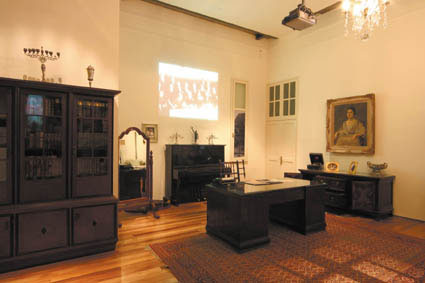 Justice will Rupture the Mountain

The largest and most comprehensive museum for documentation of the Holocaust was inaugurated at Yad Vashem Institute in . Based on the master plan prepared by architect David Reznick, a competition for its design took place a decade ago. However, despite ten years of planning, the winning proposal by architect Moshe Safdie has changed very little. The impressive structure is based on a concrete prism that ruptures the hillside and opens up to the northern view, leaving the idyllic scenery almost intact.

Thanks to its location in , the huge amount of attestations accumulated by Yad Vashem and the support of the Jewish community, the building has a great advantage over museums of its kind. While the architecture of buildings such as the Jewish Museum in and the in may overshadow the contents, the architecture of this museum blends with its interior.

Based on close dialogue, the team effort resulted in a self-explanatory structure. The architect created a building at one with its environment while the halls attached to the geometric structure give it a random dimension. The designer Dorit Harel created a thrilling display which expresses the curators desire to, once and for all, personalize the abstract concept of 'Holocaust'.

Being a dedicated formalist, Safdie has has gradually evolved, over a span of forty years, from architecture exhibiting a stark geometry of a spatial nature (Habitat) to a geometry resounding with symbolic meaning (AI #57). However, two factors appear to remain firm in all his structures: an unyielding endeavor to connect to the surroundings, and the subscription to a central theme, sometimes to an extreme degree. In this respect, the new museum is a classic example. A 180-meter-long concrete prism penetrates the , shouting out 'Justice will rupture the mountain'. True, not every architectural piece needs to scream its intent; however - a must do so.

The complex is planned as a gradual move from the pastoral views of the hillside into the dark contents of the past. The monumental entrance gently envelops a glass cube that filters in sunlight. Serving mainly as a passageway, the upper level consists primarily of information functions. In the lower level there is a cafeteria with a south balcony open to the view. The transition from this structure to the new museum is made through an interior courtyard from which visitors can turn to the other sites of Yad Vashem, or enter directly through a bridge to the hell of the Holocaust.

An in-depth examination of the simple geometric prism reveals a more complicated  lay-out that is mostly hidden underground. After a short video introduction, the visitor is swiftly carried into the main exhibit by a sloped walkway which introduces the experience of walking through the horrors of history, in a route that has no place for personal choice.

As in other buildings designed by Safdie, this structure contains a cathartic space that is well immersed in the narrative: the Shrine of Names is a space that leaves no visitor untouched. The huge space contains photos of victims that hover over an excavated water pit - the lowest underworld from which there is no escaping. From this point the stunned visitor has no choice but to ascend the (rather acute) ramp leading to an open balcony from which he can view the comforting sight of the mountains.

While live testimonies of the Holocaust are becoming extinct and the voices denying the horrors are growing stronger, the essential challenge of the design is to concentrate on delivering a credible and unquestionable message. If other museums typically lack content, Yad Vashem faces the opposite situation: the abundance of testimonies accumulated over the past sixty years has created a problem of sifting and choosing those which represent best the horrors of the Holocaust. In this context the desire of the museums curators to individualize the experience was just.

Simple and comprehensible, the design is based on fine use of modern display techniques which combine authentic items - personal belongings, photos, and real time victims writings. The narrative that intertwines with the structure creates a correct synchronization of the buildings circulation and the chronicle of events, thus avoiding premature fatigue while improving the visitors gradual understanding of what really happened.

Ten focal points emphasize the horrible chasm that occurred in the stature of European Jewry, which instantly collapsed from prominence into the lowest degrading reality. The route starts with a video presentation by artist Michal Rovner, describing the Jewish life in pre-war . Then, the rise of Nazism; the confiscation of Jewish possessions; the reality of the Ghettos; the valleys of killings; the concentration camps; the 'Final Solution'; the extermination camps; the resistant fighters and the 'righteous Gentiles' who sheltered Jews; and finally the hardships of the refugees and the boats of illegal immigrants.

The most essential junction between the building and its content occurs in the Shrine of Names. This heart-rending hall includes a library of eternal testimony, and an adjacent study room that allows the visitor a deeper understanding of each of the 600 images appearing on the Shrines ceiling.

The exit 'frees' the visitor from his enforced participation in the experience. A sunken courtyard enables a respite before entering other sites - the new synagogue containing holy books that survived the war; a museum and study institute of Holocaust art; the Spielberg Centre for changing exhibits; the Centre for Holocaust Studies; the Children Memorial Museum (Yad LaYeled); the train-car monument; and the Remembrance Tent that takes precedence over all the other structures by means of higher topography.

The main shortcoming of the structure lies, ironically, in its fracture theme. While gently hinted at in the architecture, the interior design takes it to an extreme. Exhibiting 'valleys' which fracture the museum floor prevents one from shortening the route, thereby creating a somewhat overdosed journey. Thus, the multi-sensorial experience induces a physical wearing down.

The curators desire to actualize some of the Holocaust experience is, undoubtedly, well intended. However, one should remember that a , more than any other public building, is also intended for the survivors - old and handicapped, who have no chance of undergoing the entire arduous route. It may be suggested that an immediate opening of emergency passageways might help solve the problem, leaving the impressive exhibition intact.