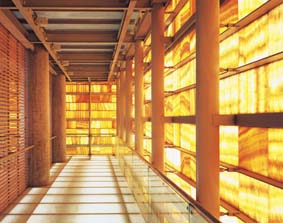 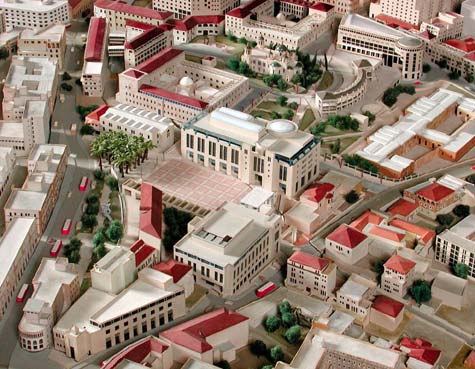 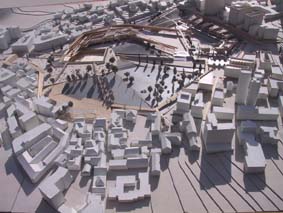 The competition for the design of the Courthouse in Petah Tikva was won by Dina Ammar - Avraham Curiel Architects. Their plan emphasizes the integrity and lucidity of the court. The architects attempted to integrate the adjacent urban park into the complex, despite the dividing road. The design staff included architects Yaacov Lazar, Boaz Gerstein, Galit Avni, Shiri Chayut, Asaf Ben-Nun.

The Israel Foreign Ministry building in Jerusalem, planned by Kolker-Epstein-Kolker Architects with Canadian architect Jack Diamond, was awarded the AIA prize for 'one of the top ten most elegant buildings of 2004'. The prize is awarded annually in cooperation with Business Week and Architectural Record magazines.

Once again, the Contractors and Builders Association awarded the prize for Building Excellence to a building planned by a member of the judging panel. The winning architect explained that he had notified the director of the association of his having planned one of the competing buildings, and was consequently excused from judging that particular category. In reaction the head of the Building Excellence committee explained that following AIs publication of the previous case, the competition regulations had been altered and the phenomenon thus legitimized. Perhaps the Knesset should adopt the patent and determine once and for all that bribery is legal. History proves that the system worked well for the . Dr. Michael Chyutin, whose office had also participated in the competition, has raised issue with the outcome.

One of the pillars of Israeli architecture, building engineer Shamaaya Ben Avraham, has passed away. Ben Avraham planned many of ’s most prominent buildings, among them the  Shalom tower, IBM building and the Azrieli towers. His final project was the pedestrian bridge built across in replacement of the collapsed . Architects interested in writing about his contribution to Israeli architecture are invited to contact AI.

The exhibition 'Unending Quest - European Architecture', held by ArchEtrans - an association for promoting a European dialogue and exchange of ideas in art, city planning and architecture - will be on display in throughout November. From the exhibition will progress to , and perhaps even to . The exhibition attempts to examine the relations between form and content, and their expressions as found in European countries (Including Israel and the Palestinian Authority). Some well known architecture firms and artists from a number of countries were invited to participate. Among them were a Palestinian artist, and the Israeli firm Kimmel - Eshkolot (associate architect: Ilan Karmi). Kimmel - Eshkolot exhibited the in (AI #45), their proposal for the Babi Yar community center in , and the Helen Diller family center to be built on campus, Beer Sheva. Housing about 180 staff rooms, the structure will be built out of different sized prefabs, producing an interesting facade.

The exhibition 'City Born of Love', a series of colored sketches of conserved buildings in , by architect Sergio Lehrman, is currently on display at the Museum for Art of Israel, . .

On the Verge of Architecture

The Peace Taxi: Ruth Horam and Magdalena Hefetz - artists whose works of garbage  decorate a number of building facades in , have erected a new environmental statue on a house facade in Beit Zafafa. The statue, an image of a flying car, was assembled at local garage Alian, which will probably collaborate with the two in the future, in an effort to bring hearts closer. The statue was named when a boy in the crowd said, 'That’s the Peace Taxi' - constructed from Israeli parts, by an Arab garage, not going anywhere.

Architect Prof. David Cassuto, previously Deputy Mayor of , was appointed Head of the Department of Architecture of the , following the three-year office of architect Prof. Saadia Mandl. Mandl - one of ’s most prominent architects, formerly established the Department of Architecture in Bezalel, and led the along its accreditation path to the 'Registered Architect' degree. Approximately 150 of the graduates are already integrated in architectural firms.

The David Azrieli School of Architecture, , celebrated 10 years since its establishment, in an impressive ceremony, including a display of chosen works and refreshments, in the spirit of the academic milieu. The student works expressed the exact problematics of current  Israeli architecture: creative ability, on the one hand; and the dispersal of ideas still reflecting a search for direction, on the other. Since it was impossible to be critical in such a celebratory environment, here it is: most of the presentations were not clear, their subject matter was not lucid, and no conclusions of pre-project research were embedded in the projects. Friends, presentations are an important means of transferring projects from the subjective ideas in your heads, to their actual objective realization. If there are any deficiencies, one cannot be surprised if the client is not satisfied. And believe me - the client is not satisfied.

Nonetheless, Arieh and Eldar Sharon fund, and Architecture of Israel magazine granted this years joint award for 'productive thought' to Liran and Nitzan Chechik (guided by architect Yoram Nidam). Centered on a replanning of in , the project proposed an alternative to the future courthouse and the that are designated to be there. Second prize was awarded to students Nitzan Barchan and Michal Hoffman (directed by architect Ayala Ronel), for their plan of an art center in the Nachlat Itshak industrial zone. Worthy of mention, both projects exemplified the ways in which research was distinctly expressed in the resulted product. The first used topographical stratification as the focal point; the second unearthed the artistic potential of the environment in a very subtle manner. Two other students projects were awarded for their praiseworthy designs, both under the guidance of architect Danny Lazar: one - by Gai Teomi and Noam Talmor, for their plan of a community center for the handicapped; and the second - by Tamir Hativa, who planned a center for visual arts in the recently gutted in Tel Aviv.

The Model House - a detailed model of ’s city center, enables citizens to internalize the fatal changes in the recently approved master plan. The construction of the model was initiated by architect Amnon Niv, who was the city engineer in the 1970s. The problem with the model - one of the world’s most famous ever to be built - is that it attempts to increase awareness of the building heritage of the city while miniaturizing it. The advantage is that it will enable the decision-makers to reassess their plans, especially those to be carried out long after their initiator service has ended. City spokesman says 'a visit to the model is an exciting experience'. Yet, doctors might claim that 'over-excitement can lead to illness'. It all depends on how you look at it.

The beach elevator and observation bridge, Netanya promenade. The first elevator in - 'Hamaalia', was inaugurated in a building on in the summer of 1924. Eighty years later, the Netanya beach bathers dream has come true: people can now ascend or descend the cliff in a public elevator. The elevator and a bridge that ends in a point for contemplation, are new-sprung elements of s panorama. Should the municipality be insightful, it will continue to provide its residents (especially the elderly) with the generous service for free. Perhaps other city beaches will recognize the value, and build one of their own: Ludmillas mother hasnt been able to go down to the beach for some twenty years now.

Thats it for now,