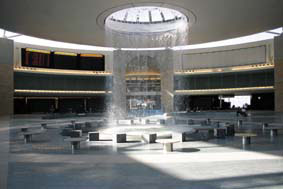 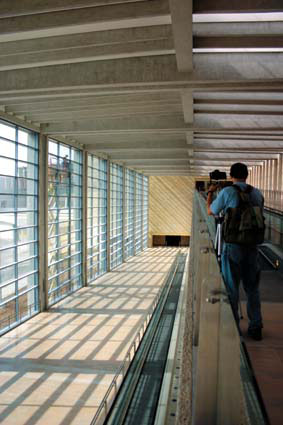 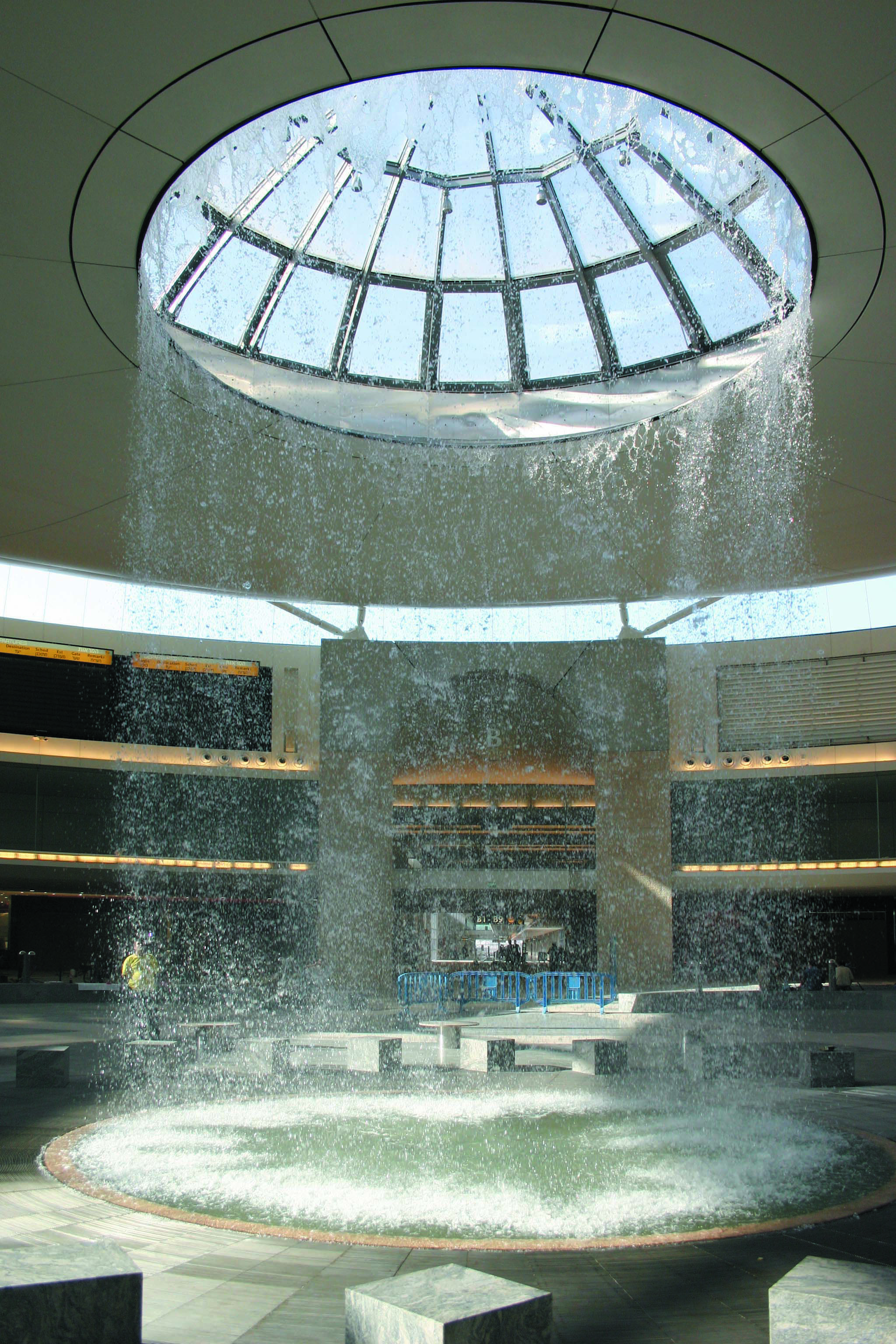 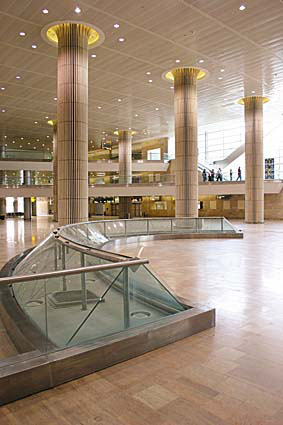 Ten years ago decided to upgrade her international airport to the reality of the new millennium. At that point, three alternatives were on the agenda: to renovate the present terminal, to add new structures to the existing terminal, or to build from scratch an entirely new terminal. Having chosen the third option, the program was entrusted to Leigh Fisher Associates (LFA) – airport consultants’ office headed by architect Eugene Lewis. The conceptual scheme prepared by LFA is a star-shaped complex made of a series of structures arranged linearly in correspondence to their function. The complex consists of two sections - the landside terminal and the airside terminal, differentiated by the passenger movement procedures - those that precede passport control and those that follow. Naturally, the landside terminal contains all the relatively free activities, while in the airside terminal far greater supervision is needed. Passenger movement is necessarily navigated towards the airplanes in the shortest way, but not before they pass through one of the more beneficial flight destinations - the duty free shops.

An important aspect of the programme was to minimize the airport-anxiety many travelers suffer in such domineering spaces. As such, the solutions focused on efficiency and clarity, even at the expense of (too) long distances, approximately 750-meter walk.

The airport’s approach circuitry is organized by a triple layered access system: departure on the upper floor, arrival on the ground floor, and the Jerusalem-Tel Aviv railroad track on the underground floor. This principle, maintained by many international airports, governs the entire passenger traffic in the complex. Accordingly, all the departure procedures are located in the entrance hall on the upper floor of the landside terminal - the farewells, security checks, luggage and passenger check-ins and the passport stamping. From there, passengers are guided through a connecting space to the airside section through the duty-free shops, and then via three concourses to the waiting halls from which they proceed directly to the airplanes.

The landside terminal was planned by Skidmore Owing & Merrill LLP from USA (SOM) and Ada Karmi-Melammede and Ram Karmi from (until 1995, since when he retired from the mission, remaining only consultant to architects Zvi Lissar and Ilan Eldar who prepared the working plans). This complex includes the entrance hall; the farewells hall and the passport control on the upper level, with the luggage reclaim and the reception hall on the lower level, where the exits are located. Though architecturally graceful, the greatest vulnerability of this terminal lies in its spatial arrangement. Thus, the entrance hall, serving the main gate, and therefore the most representative part of the terminal, is relatively mediocre in its design. The dominant features in this section are the stone covered columns, which also serve as the air-conditioning dispersal system. The symbolic , designed by architect Shlomo Aronson to provide a view of ’s landscape, is barely visible to the arrivals, for whom it is essentially intended.

Designed by Lissar-Eldar Architects, the train station is an integral part of the landside terminal. The transportation innovation should contribute greatly to the airports accessibility. Though the airport’s master plan dictated a 350-meter underground tunnel, the architects proposed an alternative system of two closed entrance structures (entry and exit). Access to the open station, below ground level, is made via escalators and elevators. The roof of the station serves as part of the exit plaza as well. The area designated for the train station is wide and in length, south of the landside terminal. The train station will also serve local residents using the adjacent ‘park and ride’ lots.

The airside complex was planned by TRA and Moshe Safdie Architects (MSA), headed in by architect Irit Kohavi. In this terminal the focus was uncompromising efficiency and the commercial aspect of the must-have-duty-free experience. At the core of it stands a rotunda structure covered by an inverted dome, which drains the rainwater and floods it into a pool at the center of the piazza below it. Five arches lead to three (two more in the future) concourses, through which the passengers reach the waiting areas. However, the jewel of the airside is no doubt the connector that bridges the airside to the landside terminals. Here, in an impressive space rendered dynamic by bare concrete precast elements  enhanced by the play of light and shade, comers and goers virtually interact. This minimalist space stands in contrast to the commercial section bustling with shops, cafés and restaurants.

The general architectural guideline for the support structures is based on large open spaces that enable flexibility and freedom of movement. Considerable effort was invested in producing a comfortable and pleasant work area for the employees. A clear and unified architectural language - vaulted aluminum roofs, exposed concrete, stone walls – has granted the entire airport a contemporary and light look - something which cannot be said for the air- and landside terminals.

The new airport undoubtedly ranks high, even on the international scale. The building is well day-lit by windows UV protected by fritted glass, designed to allow varying degrees of sunlight penetration according to the angle of the sun. However, too many planners (some 40) and an even higher number of decision-makers, was a recipe for a design mish-mash, thus failing to produce an architectural 'revelation'. Perhaps the greatest achievement of this international scale project, somewhat reminiscent of Eero Saarinens 1961 TWA JFK terminal, is its clarity and comprehensive orientation.

One cannot, however, ignore the fact that the final product is rather impressive, in spite of some significant discrepancies between the airside and landside terminals on the level of planning and attention to details. This may be due to the fact that SOM, who were responsible for the landside plan, made the meeting of deadlines their priority, whilst TRA and MSA used the airside terminal to develop a coherent language, rather than mere architectural gimmicks. There is no doubt that MSA benefited from their establishing an on site office from which all the architectural activity in the terminal was managed.

Still known as Ben-Gurion Airport 2000, the project, which was conceived, planned and built over 12 years, was opened to the public in November 2004.