The Hidden Machine Between High-Tech and Good-Tech 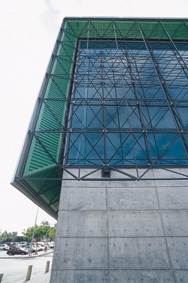 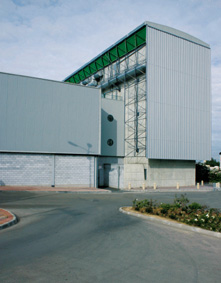 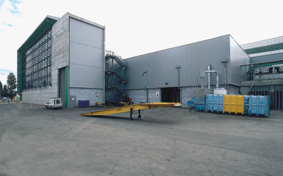 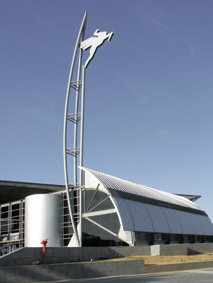 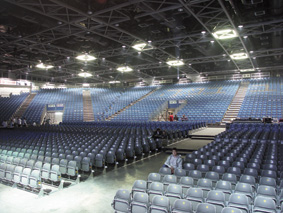 The terms "high-tech" and its counterpart "light-weight" were introduced by the Archigram group as basic concepts in their 1961 premier publication devoted to "Neo-Futurist" images. The American futurist Buckminster Fuller suggested covering mid-town with a geodesic dome thus stimulating interest in lightweight mega-structures. Reyner Banhams book "Theory and Design in the First Machine Age," published in 1960, catalyzed an entire school of design, as evidenced in highly computerized and technologically advanced Japanese architecture.

Designed in the 1970s by Richard Rogers and Renzo Piano, the in , with its excessive use of steel infrastructure, electromechanical systems, exposed stainless steel joints and large expanses of glass, was an architectural parody of the term "progress." However, the highly publicized project opened the way to market-oriented, gimmick-based architecture that proudly challenges the technological deficiencies of the old. Ironically, many overlook the fact that "innovative" elements such as these have long been in use: nineteenth century train terminals, the amazing iron and glass construction of the designed by Joseph Paxton for the Great Exhibition of , and the that has dominated since other words, since the advent of reinforced concrete and the industrial use of cast iron in large span structures in the mid-nineteenth century, the major breakthroughs in building have occurred mainly in the computerization of the planning stages and, to a lesser degree, in the control of the building materials manufacturing process.

Nowadays, the term high-tech is most closely associated with the achievements of computerized technology and its miniaturization of elements, speed and memory – all unrelated to the slow and arduous process of building most commonly construed as "low-tech" or, rarely, as "good-tech". Thus, the possibility of placing the term high-tech at the center of an architectural conception is quite limited. Though the two structures presented below are not typically high-tech, computerization is realized in their architectural conception. The first remains indifferent to extreme changes, the other exhibits a strong kinship between the mantle and its content.

The exhibition center is a huge and empty stage required to display a variety of settings: water sprinklers in a "blooming garden," heavy-duty trucks dangling from the ceiling, or packaging machines operating at full capacity. Although building materials such as textile membranes, steel columns and other technological details, address the building brief only conceptually, the column-free main hall is a flexible space easily adaptable into a performance hall seating 5,000.

The air-conditioning and electrical ducts are exposed beneath the ceiling, while other systems are placed throughout the parking level beneath. The light structure reveals its construction elements - steel beams, aluminum and glass panels – and allows all systems to link to infrastructure throughout the hall, creating a "building machine" reflecting its function.

The idea is reversed at the parking level, where the exposed infrastructure systems combine with the vehicular circulation system to    transform "function" into "ornament".

Although printing technology is not necessarily associated with miniaturization, significant advances have been made in the automation, speed and accuracy of the production process. The vast web presses for newspaper production have the bulk of a four story building, yet their operation and control is fully automated. Completed in 1998, the first stage of  Haaretz building contained two rotation machines and one quality press. The production process included paper supply, printing and binding, and distribution. Thus the building was divided into three main sections:  a central hall housing the rotation machines, with paper storage at one end and a packaging and distribution section at the other end.

After three years of operation, a third printing press was required and the north section of the lot was extended parallel to the storage facade and entry ways. The new area gave the architects the opportunity to open up the opaque structure and thus reflect the activity within.

The use of transparent construction elements  is hardly new. For more than a generation structural glazing, ‘spiders’ and three-dimensional space frames have been in use, often at the cost of energy loss in places with warm climates. In this case, the transparent northern facade has only improved penetration of filtered natural light, saving costs on artificial lighting. Budget and space constraints caused the structure to be wrapped around the interior machinery with a tolerance of less than a meter. Since the relationship between ‘housing’ and ‘housed’ has been reduced to a minimum, the extension granted the architects the opportunity to create a metaphoric conception in the industrial context. The two are so tightly spaced that it is difficult to determine where the building ends and the machine begins. In this context, a creative solution was used to cool the machines: creation of an air curtain descending along the glass wall in place of the typical air-conditioning ducts. Service rooms, usually located at the periphery of the structure, are now stacked one upon the other, adjacent to the press.