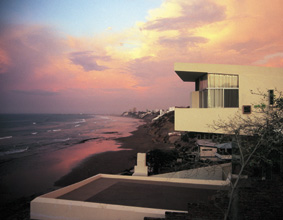 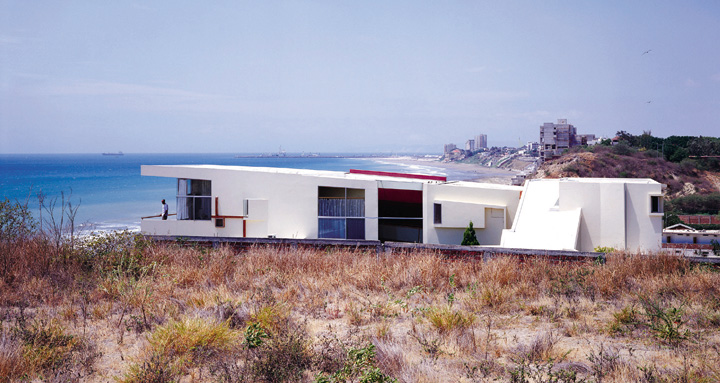 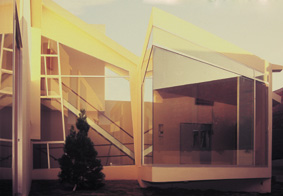 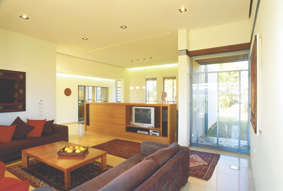 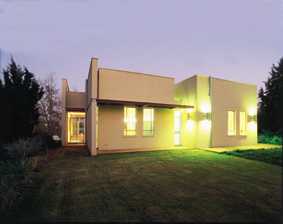 Building on a sloping site presents a challenge and a platform for creative architecture that utilizes site conditions to benefit the building, and vice versa. Although ‘proper use’ often means the needs and desires of the client, it is one of the architects responsibilities to enlighten his or her client as to the full potential of the site. Experienced and confident architects, who use self-expression and creativity as fodder for their egos, seldom need be reminded of this. Young architects, anxious to comply with the clients every whim, are sometimes less daring.

The common point of departure of the two houses below, both planned by young architects, is the sloping site. One faces the orchards of the , the other hovers over a stormy beach along the .

A living unit and a self-contained basement were added onto a cubic structure built in the 1980s. While the entrance-level bedroom unit was left untouched, other areas were renovated and reorganized. The enclosed existing boxes were dispersed into a system of freestanding walls, blurring the boundaries between the original structure and the new extension. At the heart of the design is a light and shading system granted by the new staircase, which serves as a light shaft, as well a glass brisesoleil and light slits between the ceiling and walls.

An integral part of the living area is the floating deck that takes in the view, while the building remains spatially disconnected from its extensive garden.

Clinging to a cliff above the , this house takes into account the extreme site conditions, the typical weather patterns of the Equator, and the occasional seismic movement. Located on latitude -1, longitude 81, the house is exposed to direct sunlight year-round. It receives southern sunlight with rainstorms (el niño) during the winter and northern sunlight with strong draught seasons (la niña) during summer.

The absence of a binding built environment was replaced by an ecological approach expressed by a combination of modern technology and traditional local building methods, borrowing the terraces idea from the ancient Incas. The structure of the rocky land and the extreme natural phenomena inspired an irregular plan, engaging the outdoors and indoors with a sheltered interior courtyard. The angled foundation and walls minimize the pressure on the structure during seismic activity, while allowing controlled exposure to natural light that varies throughout the day and during the seasons.

The sculptured cliff surface was covered with a porous net that enables growth of natural vegetation irrigated with wastewater. The stairs leading to the beach are of bamboo according to the local tradition, and covered with clay for protection.