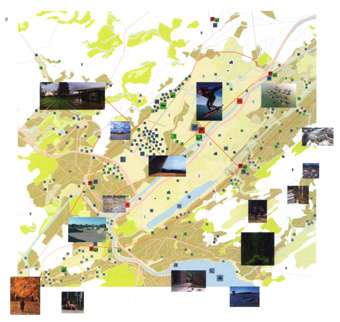 One architect and one scientist, Franz Oswald and Peter Baccini of the Swiss Federal Institute of Technology in Zurich (ETHZ), have combined their knowledge bases and analytical tools  into a new synthetic approach to urban planning.

Netzstadt – literarily ‘net-city’ – is both a metaphor and a model: a way to perceive, analyze and interpret as well as a basic pattern of organization, intervention and planning of urban systems.  It is part of a long term development strategy (over two generations) for societies of new urbanity, i.e. populations of developed countries which enjoy efficient access to social and technological modern infrastructures. City/country, nature/culture, local/regional and similar dualities are irrelevant to this new lifestyle which evolves equally on the backdrop of an agricultural field, a nature reserve or a skyscraper. New urbanity is characterized by massive flows of people, goods and information concentrated at the nodes of the net.

Any such system of paths and nodes, covering tens of thousands of square kilometers and amounting to hundreds of inhabitants per square kilometer, continuously changes and is therefore prone to accumulation of new problems and needs at various scales and aspects. This is when the Netzstadt model may be called up for redevelopment and reconstruction.

Netzstadt does not propose archetypal solutions.  Guided by the four leading principles of shapability, sustainability, reconstruction and responsibility, it is a process which presents systematic analyses to be considered by people potentially affected by the development. It is the public that sets the planning objectives that are eventually restricted and redefined in a feed-back cycle between the public and the experts. The participatory process is not part of  Netzstadt, but the authors propose the Synoikos method, which they have tested in real-life situations.

Netzstadt is an interesting attempt to save the urban planning discipline, by reintroducing elements such as inspiration and creativity. The decade-long collaboration between Oswald and Baccini has produced a  methodological framework that secures the unique architectural-morphological and scientific-physiological contributions, without suborning one to the other. In fact, a much larger inter-disciplinary platform is implied, following five methodological phases: identification of the urban system in the terms of the model; three analytic steps which structure the system into selected activities, shaping it according to key resources and representing it by types of territories; and a final stage of quality evaluation according to the above criteria.

All phases and their components are well defined, explained and illustrated in the book.