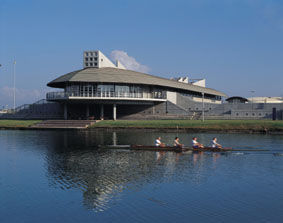 Architects Gabi Schwartz and Gidi Bar Orien have won the public competition for the design of the advanced studies complex at the Technion, . Their design is composed of four pairs of rows of four story buildings, intersected by a central passage way. The project expresses subliminal ideas like blending in with the view, ecology and flexible performance.

Second place was awarded to Gali and Shimon Yivgi, Dima Mirnov, and Virgina Malzek. Their proposal was based on complex geometric forms that imitate natural phenomenon.

The joint plan of Arbigaz Architects and Milbawer-Eyal Architects also reached the final stage; their low, linear buildings produced some interesting spaces and presented a simple and elegant solution.

This year’s David Azrieli prize for Urban Design was awarded by the Council for Beautiful Israel to architect Professor Moshe Tzur, for his plan of the in Kfar Saba.

Perhaps this is a good opportunity to mention that the indefatigable entrepreneur and architect David Azrieli has received an honorary Doctor of Philosophy (Architecture) degree from , . The honorary degree was bestowed on Azrieli for his contributions to the establishment of the at . Well done!

Three architecture-related exhibitions at museums this year focused on the alienated and the impersonal.

'Scanning: The Aberrant Architectures of Diller and Scofidio' at the , explores the influences of technology on all aspects of life.

The current exhibition 'Living in a Grid' displayed at the MOMA, deals with the massive influences of the network of grids that operates in every part of modern life.

And, Pierre Huyghes 'Blinking' at the Guggenheim presents two well-known Le Corbusier public buildings that appear to be in Morse code dialogue as they are alternately flashed on a wide screen.

Evi Polegs 'Sentiments to Michael Archipanko' is a collection of nine brightly colored totems that signify the American Indians influence on the art of Archipanko.

Known for his creation of the 'Art Novak' Ousafia workshop, artist Moshe Novak is moving on from wall-to-wall carpeting to computerized laser steel sculpting.

The concil held in competition for the urban renewal of the citys center. In second competition was held for the Town Council building. Both competitions were won by Donski Architects whose multi-layered design complements the city which developed along lateral lines.

The cornerstone of the new for Peace on in has been laid. The Italian donor hired the Italian architect Maximiliano Foxas, saving the bother of holding an open competition. The new building will be located on a lot along the seafront. Architect Yoav Messer is Foxas’s local representative.

The Daniel Amichai Nautical Center. on the in Tel Aviv was built in memory of Daniel Marcus, who was killed in a car crash in 1993 while serving in the Israeli air force. The center will enrich the existing leisure activities available at the riverside park. The building, which resembles an airplane hangar beneath an upturned boat, has two levels. The ‘dry land’ facilities such as the cafeteria and a riverside balcony are on the upper floor, with the nautical activities concentrated on the lower floor, close to the riverbank.

The plan for the at the entrance to has been approved for submission by the district planning authorities. The 300-meter long structure, designed by Santiago Callatrava, has little to do with the concept of ‘light,’ neither does it relate to the weightiness of the capital city.  However, it may help the many visitors who will come to see this 'wonder' get used to the idea of the new rail system that is supposed to solve the transportation problems in this problematic city.

Built to commemorate the 'illegal' boats smuggling Holocaust survivors prevented by the British from reaching safe harbor in , the refurbished is an attempt to once and for all resolve the conflict between the kind-hearted British who gave their all in the fight against the Nazis, and their less-caring compatriot bureaucrats who turned away the refugees.

The Tel Aviv University School of Architecture has relocated to the Ramat Aviv campus. The academic year was inaugurated with an exhibition which provided us the opportunity to say a few words of feedback, with some criticism. First of all, its about time the projects related to reality. The tangible relation between art and architecture does not legitimize the traumatizing nature of many of the works. Once, I remember, there were buildings that had some parallel lines. Imagine a situation where medical students waste their time searching for a medicine for a disease one might, one day, contract on Mars, before understanding the basics of anatomy.

On the other hand, we did find a few projects that express clear ideas:

Fourth year student Tami Ben Yizchak planned a conservatorium in the quiet neighborhood of Neve Sharret. Her design was based on the logical idea that music is an international language that ties people to their culture.

Third year student Eran Ziv planned a visitors center at the Apollonia archaeology site. The project blends in nicely with the view while reinforcing the cliff that is in constant threat of erosion.

Itai Ashchar from the same class  planned at the same site 'A Center for War and Peace'. Even though there seems to be no logical connection between the place and the purpose of the center, the project is visually attractive.

'A in ' – the final project of Iris Kashman and Maya Elazar is an elegant architectural solution for the triangular lot. Inner courtyards are always welcome in any enclosed spaces, especially in Mediterranean architecture.

First year student Ronen Beckerman planned a small house in the Tikvah working class neighborhood of Tel Aviv which could easily grace the most exclusive suburb. The inner courtyard determines the relations between the surrounding spaces.

Third year students Danny Cohen and Michal Grinbaum provide proof that you do not need to quote 'Zaha Hadid' in order to produce an interesting building.

The final projects of Ido Kaufman and Dina Hania from the Judea and Samaria College in Ariel, is a plan for an civic center.

The final project of Daniel Arav and Tal Spiegelmans from the Ariel College is more questionable: the two students designed an additional wing for the Tel Aviv museum based on an idea to complete the square naturally formed by the three existing public buildings. However, they mistakenly located the new wing on a bridge above the street, creating an urban trap that caused them an endless search for a reasonable solution, which could no way be found.

One of the good signs of the era of the new Dean of Architecture at the Technion, Professor Edna Shaviv, is the acknowledgement of the outstanding potential provided by the symbolic relationship between the school and the city. The new academic year is labeled 'The Haifa Year', to encourage public debate and influence on the development of the city. Good luck!

'The Jerusalem Scrolls' by Dr. Michael Chyotin is a computerized reconstruction of the plan of the First Temple, the city and other important buildings. The reconstruction exposes the mystical relationship between geometry and arithmetic that were familiar to the scientists of the ancient world.