A Different Opera- The Architecture of Sir Michael Hopkins 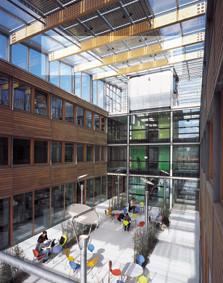 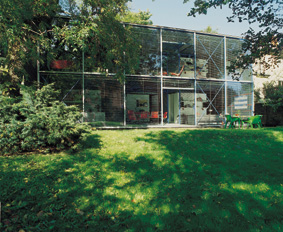 Sir Michael Hopkins is one of the most renowned architects in today. His main contribution to the promotion of English architecture is perhaps most visible in his ability to reproduce traditional forms using new building techniques and traditional materials, without getting trapped in the postmodern minefield. , whose tensile structures appear in some of his new buildings, has won many prizes, most prestigious of which are the Royal knighthood for his services to British architecture and Gold Medal of the Royal Institute of British Architects. The medal was actually awarded to the architect couple, Michael and Patty Hopkins, who jointly run their partnership.

On completing the Glyndebourne Opera House in 1994, was marked as the successor to Lord Stirling who had died two years earlier. Sir Michael is valued, amongst other things, for his success in granting the New Modernism a British touch. Yet, has not yet been recognized for reaching the career heights that the other Royal Knights –  Foster, Rogers and – may have ventured to. This is perhaps because he has never built outside – a natural condition for reaching such status – or perhaps it is because his works express a significant divergence between some dynamic and impressive buildings and others of less discernable quality. This discrepancy is clearly demonstrated in the erected above underground station. The former is a massive impenetrable urban block, while the underground station is dramatically dynamic, transmitting an authentic modern lightness.

The joint career began in 1976 when they completed their own private home in Hampstead. Three private homes can be identified as sources of inspiration: the Johnsons Glass House in , ; Mies van der Rohes Edith Farnsworth Home in ; and the California Eames House. All are post-war steel structures that were perceived in as the ultimate symbol of Modernist simplicity. The elegant House put the young couples architectural practice in the headlines, granting them the status of respectable architects and leaders of the new high-tech age gaining popularity in the at that time.

The buildings that followed had to justify expectations. The couple have succeeded in maintaining their design standards while expanding their repertoire of details and their range of colors.

The completion of the in 1992 was a turning point in the offices high-tech journey. entered the field of tensile membrane structures pioneered by the German architect Frei Otto. The fast-paced development together with the Arup engineering company of this technology increased the advantages of its implementation in public and industrial buildings.

The Schlumberger Centers impressive form was a direct expression of Hopkins social perceptions: separate functions, three structures each of different sizes, appear in the facade as a unified unit flowing one into the other, promoting interaction amongst the scientists, who are otherwise isolated in their own laboratories. While the two lower wings function as research computer rooms and offices, the upper structure of three tents houses the research labs, the entrance lobby, restaurant and coffee corners. At night, the light that penetrates the membranes gives the building the illusion of something out of the imaginary world of science fiction.

The Mound Stand at the Lords Cricket Ground in is a good example of innovativeness at the time (1987) and may be regarded as a turning point from his high-tech jargon. Cricket is a long-standing tradition in where in many villages one can still see people clad in white, playing on the public green, and drinking tea under a colorful marquee. understood both the importance of positioning such facilities and the nostalgia of club members towards them, and he used these images in his proposal for the Lords refurbishment. The new Mound Stand rests on top of the extended brick colonnade of the 19th century stand, preserving some of the original seating. The three floors, membrane-like structures, are supported by pillars, an element that from that point onwards became a regular part of the Hopkins-Arup lexicon of forms.

The Glyndebourne , marks the ripeness of the partnerships new age. ability to relate the new to the old reaches new heights in this project. This old country lakeside house is a private business that has no artistic company of its own. Yet the quality of a Glyndebourne show is equal to any of the worlds leading opera houses. Every year a team of entertainers is chosen to direct and perform throughout the summer season. According to tradition, the audience appears in full evening dress, with their own picnic baskets and champagne, for the huge dinner party that takes place during the intermission. In the finals of the competition for the design of the new Opera House, Hopkins beat Stirlings office, who was considered the certain favorite since his design fulfilled the expectations of all those in favor of preserving the environment and the tradition.

While Stirlings plan preserved the general appearance of the historic farmhouses, did not try to repeat the style of the original country house. He demolished the old barn and built a new structure instead. Using traditional materials such as handmade red bricks that are similar to the originals in size, shape and color, his oval structure is built onto the country house with its upper floors hovering above. Hopkins maintained that the new building would have to be big enough to house all the technical functions of a modern opera house and as such he chose to signify its relative importance by its size, the elliptic lead roof, and the tower that ends with exposed steel structures, offering a gradual transition between the built mass and the sky above. Only a closer view reveals the red bricks alongside the membrane structure that covers the buildings entrance.

The planning of the science building in the same private school, Sherborne, where studied in his youth in , began in 1995. The Pilkington Laboratories house the chemistry, physics, and electronic laboratories, and are adjacent to a street of cottages typically built in the local stone, with sloped roofs coated with slate or straw. The cottages facades border the street, which is characteristic of many historical villages. Despite the detailed stonework and the relative simplicity of the laboratories interiors, the building is quite elementary, and does not blend in with the rest. The original building materials were indeed preserved, but the rhythm of the landscape is broken by the new train-like structure. Even the stone-framed windows fail to synchronize with the small-scale mediaeval cottages.

When the old brewery went broke, the 19th century building was donated to the City of under the condition that the structure would be developed for the benefit of the public. The three-story building of the William Younger Center, Dynamic Earth (1999) is situated at the edge of Holyrood Park, along the beautiful cliffs, where the Father of Modern Geology and Plutonist, James Hutton (18th century) developed his theory of uniformitarianism. The geology of its location inspired the idea to develop a center where visitors could better understand the processes that have shaped the earth through interactive and virtual technologies. In the old brewery building, Hopkins assigned the multi-media screening rooms to an immense entrance pavilion formed by a tensile membrane on the roof. A large, new amphitheater was built at the front of the building; its margins provide the space for staircases and lifts to the rooftop exhibition area. An open amphitheater is used for outdoor performances during the annual Edinburgh Festival. Although interesting in shape, the roof increases the sense of disharmony between the three different components of the center.

The London Underground Bill for the New Jubilee Line Extension to the eastern parts of London included the renovation of the existing Westminster Underground Station and the New Parliamentary Building located at the World Heritage site across from Londons famous Big Ben. Completed in year 2000, the seven-story Portcullis House provides over 200 offices and meeting places for Members of Parliament and a central library. The location of the building on an historical site above the tube railway, presented numerous engineering obstacles. As a result, the plan of the building is based on a relatively simple rectangular courtyard. The wings are constructed of two rows of offices with hallway spaces in between. The roof of the central courtyard is a flat delicate dome, made of wood and steel beams, coated in glass sheets. The inner scaffolding, which faces the courtyard, rests on a system of flat generous, archways, framed by six massive columns supporting the arches, reaching down deep into the tube station below ground.

Although the buildings exterior resembles the adjoining 19th century building on the left hand side by English architect Norman Shaw, the design of the façade is more an adoption of the imagery of the building on its right. Reflecting the key trend today towards energy efficiency, many of the structural elements of the building were used to increase energy efficiency, and the ventilation system is highly visible. Cool air is blown over the concrete slabs and natural light penetrates the glass panels in the workrooms. Technologically, the building is quite impressive, yet Hopkins isolating program leaves the general public outside.

Contrary to the alienating building above, the new underground station is a free and confident space. The approach is so different it is hard to believe the same architect and engineering teams built them simultaneously. The existing train lines at the upper levels cross the site diagonally, whilst the Jubilee lines beneath are stacked vertically as they pass the station box. The resulting tension between the two movement grids grants the station the dynamics needed to reflect its function. A deep pier accommodates the underground interchange escalator system.

Bearing in mind Londons most modern tube station, the question is: "Do Hopkins works really enrich the New Contemporary Modernism, and can one view his works as a new’ architecture?" In his piece  "Tradition and the Individual Talent", T.S. Eliot presents a model for defining a real work of art: All existing monuments form an "ideal order" that is modified every time a new work of art is introduced. If we were to apply Eliots definition to architecture, such a work would be a building that may cause a change in its surrounding and thus create a new ideal order. In this way the dynamics between the old and the new is in constant change. A good building in these terms is one that will modify the ideal order, without actually destroying it. And as for Hopkins work, in contrast to the Glyndebourne Opera House, the New Parliamentary Building neither causes such a positive change nor does it disrupt the surrounding order.

Building near historical monuments has always been a complex challenge. There is always the danger of disturbing the historical setting. Hopkins in recent years offers a new synthesis of stylistic flexibility. He is still faithful to the doctrines of Modernist Functionalism but his tendency to build in the new high-tech style has lessened in favor of his use of natural building materials and traditional forms, with fine craftsmanship, handiwork and exact finishes. In such a way, Sir Michael Hopkins expresses the importance of continuity in a world where every thing changes and nothing stays the same.