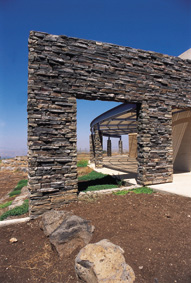 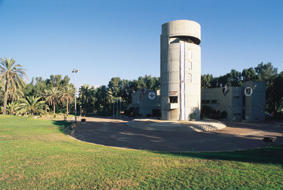 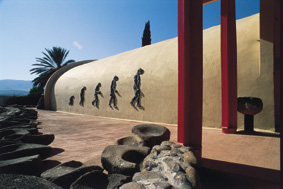 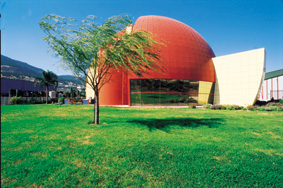 The idea to write about the countrys largest architecture office, Aleph Bet Tichnun, was inspired by a book published in memory of architect Hannan Havron, one of  the office’s founders. The title, "Clear Lines", looked promising. A group of friends, relatives and fellow members of Kibbutz Reim, Havrons home Kibbutz, compiled with great care and fondness a collection of articles referring to many of the buildings he designed over a fifty-year career. Architect Assaf Kashtan, one of Aleph Bet Tichnun’s senior architects, designated Havron as "the artist of bare concrete." Architect Vittorio Corinaldi defined Hannans work as the "aesthetics of simplicity and asceticism, beaming yet, disciplined architecture."

At the outset of his career with Aleph Bet Tichnun, Havron was a member of the planning team of the Jerusalem National Library. Other buildings he designed as a member of the office are the Yigal Alon House at Kibbutz Ginossar, the monument in memory of the Nachal Soldiers in Pardess Hanna, and the near Kibbutz Magen in the desert. Equipped with this information, I thought it reasonable to assume that clean lines and free from "overly designed and decorated" expressions would be demonstrated by all of the offices work. But after visiting about fifty of Aleph Bet Tichnuns projects, I realized that things aren’t that simple. In fact, and perhaps with good reason, many  of Aleph Bet Tichnuns buildings are multi-shaped and sometimes even overly-designed.

Aleph Bet Tichnun was established as the Technical Department of the Kibbutz Movement before the State of Israel gained independence in 1990, the office was privatized and ownership was transferred to its workers who run the six branches that are spread all over the country and the firm’s headquarters in Tel Aviv. Unlike most offices, it is managed by a non-architect and management positions rotate amongst the senior architects who are supported by a board of directors. Small planning teams, each headed by a senior architect responsible for its economic aspects, oversee each project. The advantage of such a system is that the size of the team matches the scale of the projects, and that each team has the office’s administrative facilities at their disposal.

As the main planner of the Kibbutz Movement, Aleph Bet Tichnun was involved in the development of most of the kibbutzim and settlements in the country, from the early stages of their master plans to their actual construction. The economic and demographic changes that kibbutz society has undergone in the past few years have enriched the offices wide experience in design. With offices dispersed over the country, Aleph Bet Tichnun has the advantage of close proximity to the client as well as local knowledge. In addition to the design projects that are popular in the free market, the office has specialized in some of the most technologically advanced agricultural installations in the world. Nowadays, Aleph Bet Tichnun designs 1400 projects a year.

Just about every architectural discourse I am aware of debates the relation between form and content, and it is in this context that different architectural codes can be distinguished one from another. There are thousands of equally valid answers to the question of what is the correct relation between expressions of form and content in a building, especially in an age where the goal is an abstract value like, for instance, the perceived need to be close to a body of water even when there is no intention to take an actual dip in it.

My personal preference is for purposeful buildings that are also an expression of aesthetic thinking. I am not referring to the candy-box like structures, but rather to a simple and real building that is decorated with one or even two beauty spots. To me, this is preferable over a building bearing a collection of freckles at best, or, even worse, teenage acne.

One of the problems with architecture in the age of anything goes is the danger of too much of everything: the infinite variety of computer-generated forms and the overwhelming choice of available building materials allow for some lethal combinations.

The projects described here were planned over a long period of time. The variety of subjects, different geographical locations and the varying cultural backgrounds and world views of the architects that planned them makes it hard to point out one central concept. However the common social background is discernable in most of the works of Aleph Bet Tichnun. Many projects are perhaps subconscious attempts to reconstruct the social embrace that signifies the purity of the original Kibbutz ideology. This somewhat naive togetherness concept is a precious quality in a hostile world, and it grants a clear and honest expression to the content of many of the projects.