Modern Portugal- Architecture in the Age of Masses 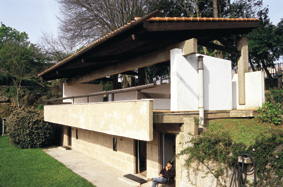 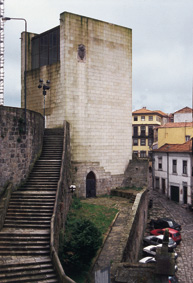 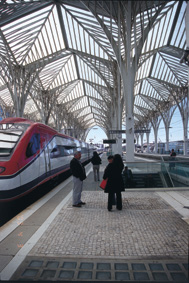 Contrary to the conservative, critical approach that has characterized architecture in the past, architecture today is in a direct dialogue with the taste of the masses. The prevailing trend has a taste of pluralism, spiced with the supposed cooperation of the community or with a dash of environmental fundamentalism, without specific forms or prescribed solutions. In other words, without architecture. Instead of one definitive solution to a specific project in a specific place, there is a myriad of alternatives - no problem is solved directly, justifications are supplied upon request. In other words, architecture today is subjugated by the laws of the competitive market and enslaved by limitations of its image. Creative thought is no longer essential, beyond the originality necessary for commercial product promotion.

In such a problematic milieu, the architecture of is like a light at the end of a tunnel.

It is hard to point out the exact reasons. Perhaps its longstanding traditions, geographic isolation, extended period under an oppressive government, along with a group of very talented architects, have kept ’s architecture clean of capricious imitations. has an architecture that carefully evolved within the local tradition through a balanced process of absorbing universal influences, until slowly emerging onto the center stage of the architecture world.

Although Portuguese architecture is usually associated with the internationally accredited Alvaro Siza, there are others equally responsible for the positive trends in current architecture. The as described by one of its members: "Many Portuguese architects are sons of Siza, but Tavora is a grandfather to all of us." The influence of Sizas own teacher, Fernando Tavora, echoes across generations.

In the early 1940s, Tavora was invited by Professor Ramos of the of to conduct a survey called Arquitectura Popular em , in which he (unpredictably) documented, region by region, the varieties of vernacular architecture in . The climate for the research was the fascist-fundamentalist regime of the dictator Antonio de Oliveira Salazar. Like Adolph Loss before him, Tavora recognized the principles of Modern architecture in the typical traditional Portuguese house: Functionalism and anti-ornamentalism. When it was "revealed" that Tavora was actually trying to push Portuguese architecture in the direction of Modernism, rather than characterize it, Tavora, Carlos Ramos, and Alex Costa went underground.

When Tavora concentrated on architectural and urban models of modernist architecture, he believed he was revealing an invention: he described the world as the form we all exist in - as "our invention." He claimed that man is a part of that form and simultaneously strives to be a part of its history. "The closer we get to nature, the more it overpowers us because it is forever stronger than us. Understanding this enlightenment is the makings of a work of art."

In many respects, Tavoras architecture is an extension of Modernism. In a number of projects conducted in the 1950s, Tavora combines modernist principles with local and traditional values and elements such as the patio and the use of ceramics. His participation in a number of CIAMs, alongside architects such as Rogers, Tanga, Gropius, Le Corbusier, Van Ike and others, enabled him to identify the same spatial and structural local elements in modernist architecture.

Tavoras conclusions from his survey of s vernacular architecture were irreversible. He questioned modernity insofar as he concluded that modern architecture is not produced in the spirit of the time. Rather, it is an affirmation of what is already known. "Modern architecture must begin in the beginning," or in other words, from the Portuguese house. Tavora found similarities between Portuguese architecture and other places around the world - "Beyond the sea, in far distant cultures, in Gaugans Tahiti, Kiplings , Frank Lloyd Wrights ."

Tavoras attitude toward city planning was essentially different from his approach to architecture. He perceived the city as an organic successive unit: the main street, the commercial square, the historical center, and the tower. He believed that whether tackling the natural and the local, or the foreign and the artificial, nature would forever overcome. In order to be versatile, every part of the city must be treated as a center.

Tavoras legacy lives on in the work of his predecessors such as Alvaro Siza. When the Fascist regime ended on April 25, 1974, the Porto School of Architecture was enlisted to try and solve the pending social issues. Many large scale projects were built and served as the melting pot that fed the future generations of architects.

Alvaro Sizas work characterizes his ability to read between the strata of the site. Every project becomes a kind of independent archaeological excavation, where truth is revealed rather than interpreted. The Porto School of Architecture, with its neverending dialogue with the land, will linger in the memories of anyone who ever experienced the work of Alvaro Siza. Perhaps the most significant was the housing project planned and developed by Siza as a system aimed at increasing user-participation in the design of mass housing, through identifying the context and the needs of the residents. The project called for the reorganization of over 30,000 existing residential units.

Other projects included the revival of the important historical centers in and . Projects such as these produced a long line of architects that worked together and influenced one another, despite their differences: Alvaro Siza, Goncalo Byrne, Eduardo Souto de Moura, as well as others who are not necessarily members of the same stream, but who all developed approaches to architecture that are sensitive to the situation.

Goncalo Byrne gained international recognition through the competition for the design of the cultural center in . His plan, which came second, proposed a multifaceted reading of the site. Other works, such as those in the historical centers of and , are an historical analysis of the context in which a new element is revealed every time. He gained his professional experience through the years working in offices such as Portas and Frira. The large residential projects and the public buildings in the campuses in Aveiro and place Byrne above fashion. An intellectual architect, he uses the knowledge he gained from a careful investigation of the surrounding context and the social needs of its residents, to produce high quality solutions.

Eduardo Souto Mouras studio is located in the same building as Tavoras and Sizas. Besides the fact that his work is characteristic of the ‘sensitivity to site’ like others mentioned above,  Moura, nevertheless, is not committed to any particular school. He is not a contextualist since he imposes a new order upon the site. Yet it it would be wrong to conclude that the question of architectural language is at the core of his work. He doubts the authenticity of ethnic elements and the typology of the modern movement, and emphasizes the instrumentality of such components. In works such as in Porto and the Market in , it is possible to identify his basic values of architecture.

Other important architects such as Goncalo Moniz, Carlos Martinez, and Sotin, also grant the local, universal ideas that critical architects are occupied with today. As Siza once said, "Architects do not really invent anything, they just alter reality."