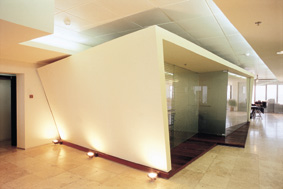 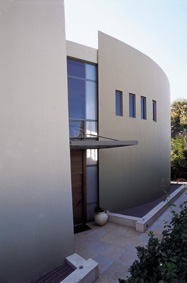 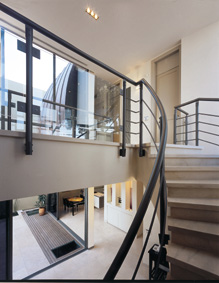 Arcod Architects was established in 1988 by the architect couple Orit Simantov-Pinchas and Doron Pinchas, after they graduated from the Faculty of Architecture at the Technion. At first, like any starting-out young architects, they took on any job that came along in order to survive. They designed concrete furniture, decorated interiors, planned additions and renovations, and furnished their resume with the design of  many private homes. In 1993 they won a competition for the design of a modern school in the exclusive Mashtela neighborhood in North Tel Aviv. The school was never built, but the credit they were awarded became an important turning point in their careers. By participating and even winning more competitions, teaching in architecture schools, taking part in professional committees and judge panels, the couple established a mature architectural outlook. Today, having survived the Postmodern flamboyant era, it can safely be assume that they will be among the leaders of a more user-friendly line, that is, a more modest-in-style discipline in which technology is no longer the end but rather a means.

During the main years of your careers, the Postmodern world has created a reality where every problem has endless solutions - each as legitimate as the next. How did you develop your own intelligible method?

"Our point of reference has always been the expression of architecture as a way of life. We focus on the content and on the essence, in a world that focuses on exterior images and the latest fads or fashions. Perhaps the common denominator in all our projects is our striving to relate the parts to the whole. In other words, our constant efforts to orchestrate a hierarchy of situations through defined spaces. This principle has helped us in our personal soul-searching and has contributed to our architectural results."

Your recent work reveals an almost emotional struggle between the prevailing tendency to use "contemporary" components and your healthy instinct to grant them purposeful significance. I can actually identify a decorative "sacrifice" to the "gods of fashion" in almost every building you designed - something beyond an absolute necessity like, for instance, the walls which encircle the courtyard at the .

"We perceive the building as a system of layers and volumes of space, and in those terms it is hard to accuse us of "working for the gods," at least not consciously. Every element of the building has purpose, even if it is not always visible, such as an emotional or spiritual aim. The courtyard walls at the school are a good example because they were supposed to give the courtyard more intimate proportions. We used a similar technique in the Discount Investments offices, in a competition for the design of the Museum for Modern Art in Brisbane, a competition for the design of the Royal Theatre in Copenhagen, in a project we presented at the Biennale in Venice (there it took on urban proportions), and even in a house on Keren Kayemet Street. In each case, we employed the multi-layer "wrapping" technique, mainly to give significance to the space within."

One of the problems of contemporary architecture is the loss of identity. Private houses are sometimes treated like museums of modern art. Does the multi-layer technique not blur the building’s functional destination?

"Even if the rationale behind the buildings plan is similar, there is a significant difference in the actual expressions of the purpose. Our interpretation of the hierarchy between the domain of individuals and that of the public is similar to the texture of lace, where the invisible and the void are more important than the visible. The house in is located on a very noisy road, which is not at all pleasant for their residents. Here, the outer layer shields the private domain from the exterior chaos. The house and the yard are built as one unit, between two angled walls that form barriers against the noise and dirt outside. In contrast, our own home is located in a quiet neighborhood, and the hierarchical division is a direct mirror of our lifestyle. The Arcod office is in the basement, and the rest of the house flows upward towards the endless freedom near the sky.

Mentioning the sky, how does a secular, "in", firm reach the Rabbi Ifargans "Court" in Netivot?

"The Rabbis courtyard is a good example of the hierarchical division of space and functional significance. The site is both a spiritual place and a place where the Rabbi meets with his visitors who come to seek his help. The "backyard" becomes a meeting place between an intimate spiritual world, where people have emotional and religious experiences, and the spaces that are designated for the physical, functional, world. The division of space between the interior and the exterior is a gradual process. As the visitor enters the structure, he progresses step by step through different layers of the space; at each stage he sheds another layer of his identity, until he reaches the final enclosed space where he can take part in the spiritual experience he came for.  By the way, our experience with the Rabbi was a lot more interesting than any other experience with the secular celebrities that surround us."

What’s the significance of the weekly Kabbalah lessons you take and how do they influence your creativity?

Orit: "From about the age of twelve, the search for the meaning of life has engaged me. I have always felt that there is something greater and more meaningful than the routine of our daily lives. Something more than the chase after money, social prestige, control, and academic degrees - things that are never truly fulfilling. Nevertheless, we both believe that we also have to engage with the material world – at least in order to support ourselves. When we first opened our office, we developed simultaneously in both directions. Only during the past three years have we been able to let the spiritual lead the material. Since then, our architecture has matured, with all the physical signs of growing older and wiser - tone of voice, wrinkles, etc.  In other words, the physical environment is now an expression of our spiritual aspirations and state of mind.

"Kabbalah enables us to understand the laws that govern the material world. Through our studies, reason and the sixth sense, we develop and produce a better and broader world. It is hard to point to the exact relation between the will and the way, but today we are much more in touch with our emotional and spiritual conditions, and that is probably expressed in our architecture.

"One should remember that we are a couple - a man and a woman with different personalities and desires. Throughout the years we have learned to work together, and to create the situation in which the "combination" is greater than the sum of the pieces."