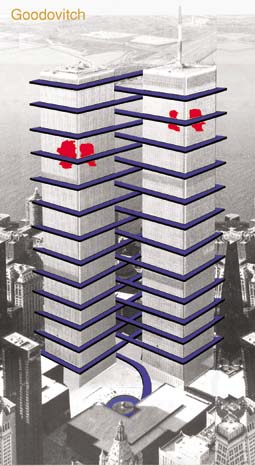 Within the framework of a profile article on the Kokler-Kokler-Epstein office (AI #51), the renovated Van Leer Jerusalem institute was also published. Architects David Reznik and Shimon Powsner who originally planned the building responded. Here are the headlines of David Rezniks response: 'For over forty years Shimon Powsner  and myself designed and cared for the campus at their request. Between 1960 and 2001, we were called upon to care for every little architectural detail or problem that arose. Somehow, when they decided to renovate they hired you. And to my surprise, I saw the building was published in Architecture of Israel in an article about your office. In my opinion that is a violation of architectural ethics.'

Gideon Powsner, who turned to us in the name of his deceased father, Shimon Powsner, added that 'a renovation has no added architectural value.' Following negotiations which involved even the Board of Ethics of the Architectural Foundation in Israel, the Kokler-Kokler-Epstein office gave their official response. 'The Van Leer Institute was indeed designed by Reznik and Powsner in 1961. Our office was hired to renovate in 2001. We are sorry for any harm done and apologize - that was not our intention.'

As one who followed the story from the very beginning, I am convinced that despite the bad taste, no harm was intended.

The Council for Beautiful Israel is offering the Azrieli prize for urban design. Their aim is to encourage projects for urban design in Israel which will provide a prototype for future plans that will improve the townscape with an emphasis on aesthetics, the benefit of the community, and the local surroundings. The prize: 100,000 NIS. Entry forms are available at the Council for Beautiful Israel, Sderot Rokach, Ganei Yehoshua, Hayarkon Park, P.O.B 23250. Deadline for entries: February 16, 2003.

The competition for the design of the Porter School for Environmental Studies at Tel Aviv University has ended. The prominent site is strategically located on a slope above the Ayalon highway, adjacent to the Tel Aviv University Botanical Gardens. All attempts of competitors to advance their projects with ecological gimmicks were counterproductive. First place went to Daniel Zalishunsky with guidance from architects Shemtov Tzrouya. In contrast to the majority of projects that were generally affected by the 'exaggeration syndrome' Zalishunsky’s design utilized basic passive means and blended well with the surroundings, even though he tried in his own words to 'create a street sign for green architecture'.

Architect Tsvi Lissar wins the 'David’s Victory over Goliath' monument design competition, out of 58 entries. The designated site for the monument is located in the heart of Ha’Ella Valley. Tsvi Lissars idea is that modern intervention must merge and integrate in the biblical scenery. Several architectural functions are placed along the  entrance path: a slope leads down to the lower level courtyard and main entrance and from there to the underground exhibition area. Above the outer courtyard, a bridge leads to the sightseeing balcony. Twelve steel pipes represent David, and lighted glass cylinders reflect the victory of the spiritual over the material.

Architects Nurit Vandsburger and Orna Zeler won the competition for the design of the Day Center for the Elderly in Givat Olga. The program offers a myriad of services for a community of over 5200 elderly  in the western part of Hadera. The Center is located on a 515 square meter plot between Old Givat Olga and the new neighborhoods. A Mediterranean style patio separates the two activity areas. Coffee tables will fill the seating area in the intimate and well ventilated patio. Sunlight will penetrate through the patio to the lobby and the seating areas that surround it. From the activity rooms and balconies one can view the sea and the sandstone hills referred to in the design by slanted walls. Eight offices were invited to participate in the competition.

The Israel Standards Institute is preparing a new standard that will define the methods for testing earthquake resistance of buildings and ways for strengthening them. The standard was motivated by a study conducted by the Geographic Institute that forecasted that  a significant earthquake will occur during the next fifty years in Israel.

A new amendment to the National Planning and Building Law that says applications for constructions must be clearly publicized at the proposed building site in addition to the daily press was initiated by the Israel Union for Environmental Defense and promoted by a member of the Knesset, Yehudit Naot.

In the last issue of the journal published by the Society of the Protection of Nature in Israel, it was stated that over three months have passed since the position of Head of Planning Administration Authority architect was vacated by Dina Rachevsky. The article explained this served the interests of the government who intends to decrease the authority of the administration in order to preserve their control over the land for political plans. I do not believe the government would do such a thing, not even if it was for the sake of their friends. By the way if the job is still available - go for it.

The problem with the exhibition '40/40' currently on at the Architects House in Jaffa is that, like many, it is a good idea presented badly. Every exhibition must select what best represents the collection to display before its public and not settle for what is readily available. Any exhibition that is not based on a fantastic idea, a researched topic, a selected theory, can and should be forgotten.

On the verge of architecture

The search for the mystical contents has gained a respectable position in architecture. Eastern doctrines such as Feng Shui are incorporated as a talismans for a peaceful, healthy, happy, and wealthy home. The artist Ronit Agiv reconstructs ancient wheat talismans that promise to increase fertility or bring economic prosperity. No one has any proof it works but perhaps a little aesthetics will not harm even the architecture of Israel.

The book 'The planning of the architecture of the Givat Ram Campus 1953-2002' by David Kroyanker is out. The book describes its crucial role in the history of the architecture of Jerusalem. The campus was designed as a garden city and most of the buildings are in the Modern International style of the 1950s and 1960s.

The book 'Idea, Intention, and Deeds in Architecture' by Bilu Blich is out. Based on a series of lectures given by the Broadcast University, it is clear and fluent. It describes the interaction between the architects intention and creation, the place and the user through the works of important architects and theoreticians of the twentieth century. The book is available for AI subscribers at a discount.