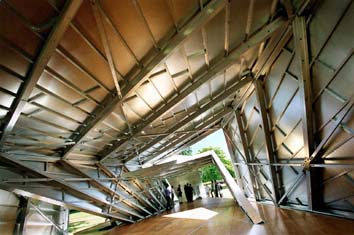 Sprawling over an area of 1,580 sq. kilometers, London is the largest city and the crowned capital of the British kingdom. It is undoubtedly one of the most significant cities in the world - such as New York, Paris, Rome and Berlin. Yet in reality, the city is presently in an advanced stage of demographic globalization, leading to the clear loss of local identity. The new buildings that have changed Londons skyline over the past decade raise the question to whom does the city belong? The architects? The inhabitants? Everyone?

The Recovery Plan prepared by Tony Blair’s parliament, promoted the building of prominent architectural projects. London’s mayor, Ken Livingston, known as a radical liberalist who encourages building and development, prepared a new Master Plan for the city’s center. The plan will serve as a basis for economical, social and municipal development. After it receives the public and City Council approval, it will have to be approved by the British parliament. However, Londoners today no longer represent a typical model of the traditional English culture, and one can assume that the internationalization threatening the traditional image of the city is actually an irrefutable result of the demographic reality.

Following the total disappointment of the Millennium Dome, it seems that the next object of criticism will be the new London Municipality building which was inaugurated in July 2002 on the southern bank of the Thames. One can presume that if Prince Charles, the 'City Guardian' was more forthcoming, this 'ecological' U.F.O would not have been built in its present form. According to the architect, Lord Norman Foster, the environmentally-friendly building is harmoniously integrated with nature, and will become a historical city landmark'. However, Norman Foster has fallen prey to the contemporary 'ecological' trap and designed a totally alienated and pseudo avant-garde building that could have been built anywhere else in the world, except in conservative London.

The only connection that one can imagine between the building and the environment can be traced thousands of kilometers to the building complex 'Chesa Futura' - a small-scale housing project at St. Moritz, Switzerland, which Foster recently planned and presented as an architectural gimmick at the Biennale in Venice. These two ball-like projects deliberately portray an architectural challenge of the laws of statics and transmit instability. Yet, while the Alpine building certainly suits the challenging snow sport, it is doubtful that the Municipality building deemed to transmit a timeless stability, can afford itself the luxury.

As one of the worlds top-ranking architects, Lord Foster is confident enough to expose the building’s 'secrets', explaining that the building will consume only a quarter of the amount of energy required to air-condition an office building of a similar volume - 'employing solar energy, natural light, passive ventilation and a cooling system based on the flow of cold water that is pumped up from deep wells dug up on the site'. And as if these characteristics arent 'green' enough, the building was fitted with recycling water systems, silicon lavatory seats with no rinsing apparatus, solar collectors, photoelectric panels, and a system for the heat absorption of the building’s envelope and its employment for the heating of the cooler areas. The question remains whether, amongst the six hundred architects employed by the Lord, will one whisper in his ear that most of these 'green' patents do not surpass the gimmick level!

Rising to the top of the building, the spiral atrium thoroughly wastes all the energy 'savings'. A wooden model of the new Master Plan, of which the public is asked to express its opinion, is displayed on the ground level. The Council Hall is situated above the ground floor and is surrounded by glass walls - a pathetic reminder of the Reichstag in Berlin whose renovation has recently been completed also by Norman Foster. The 'London Salon' is situated on the upper floor, from which one can view the city from the identical height as that of the Big Wheel, which was built in 2000 as an opening call to the new city 'circus'.

It seems that it won’t be long before the British tire of 'publicity stunt' buildings, and will discover that the glass coated steel constructions naively incline towards the south, in a city that is exposed to approximately only ten days of sunshine in the summer.

In sharp contrast stands the Serpentine Gallery Pavilion in Hyde Park. An ingenious exercise in public relations, it presents a lesson in the positive steering of the 'evil powers' whereby renowned architects receive an unusual opportunity to demonstrate their talent in redesigning the temporary pavilion that functions merely as a cafe, yet receive a great deal of publicity.

The gallery, active since 1970, classifies itself as a 'charity educational institution whose aim is to comprehend and promote contemporary international art'. Surrounded by the magnificent Kensington Gardens, the prestigious gallery is situated in a Classical redbrick building, which since 1934 has functioned as the parks Tea House. The gallery was a pioneer in exhibiting the works of the most celebrated artists, including Man Ray, Andy Warhol, Henry Moore, Brigitte Riley, Damien Hirst and Rachel Whittered. John Miller completed the renovation of the building in 1998, under the auspices of Princess Dianna, at a modest cost of four million pounds. The renovation fittingly preserved the original character of the building, while adapting the exhibition hall to suit contemporary needs.

In 2000 it was decided to establish a pavilion next to the gallery to express Contemporary Architecture in addition to Contemporary Art. In light of the developing competition among contemporary London art galleries, the idea was to exploit the marketing value of prominent architects, without harming the traditional image of the city. Thus, each year a different architect is selected to design the pavilion over a limited period of time in keeping to a tight three-month construction period. For this purpose,  the architect Zaha Hadid was recruited in 1999 to the institution’s Board of Directors and was also selected ('by chance') to design the first pavilion of the series. Zaha Hadid’s pavilion was reminiscent (not coincidentally) of a Bedouin tent - a simple construction concept, totally inconsistent to her characteristic geometrical squalls.

Invited to redesign the pavilion after Hadid, Daniel Libeskind created a building recalling Origami, which he termed 'Eighteen Folds' - referring to the number of allegedly made folds in the building’s envelope to form the building. Perhaps to his credit, one may note, that Libeskind’s pavilion recalls the diagonals of the Jewish Museum in Berlin, whose non-contextual plan aroused strong opposition, yet it also brings to mind the addition to the Victoria and Albert Museum, which, again was also based on the Origami trick. At the time, the building created an exciting environmental experience, when the aluminum panels glittered in the sunlight against the background of the grass and the leaf foliage.

Following the dismantling of Libeskind’s (Japanese) building, the prestigious design task was bestowed on the talented architect Toyo Ito. Surprisingly, it was the Japanese Ito who succeeded in creating a remarkable 'Zaha Hadid' building. Ito recalls how passing in the vicinity of the gallery last year, he was enchanted by Libeskind’s creation, and since then had hoped that the project managers would approach him. The mystery remains of how these hopes were transformed into reality.