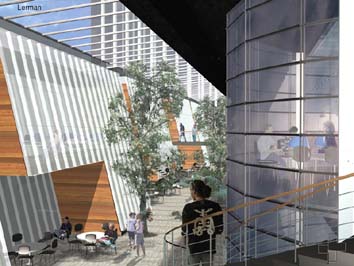 A small (mostly religious) number of readers have complained about the 'expressive' sketch by architect Shmuel Groberman, depicting the entrepreneurs as a 'herd' of men 'comparing sizes' (issue no.50).

We apologize if it was not distinctively clear that the comparison in the sketch was that of the size of their buildings and not any other urban organ. It will (probably) never happen again.

We apologize and thank you for the important comments, we will make sure to name the landscape architects of every project we publish from now on – and you can check us.

Otzar Sea Industries together with the Architects Association have announced a public competition for the planning of the development of the open space in Tel Aviv Port. The competition is open to architects and landscape architects, as well as a special program for students. The panel of judges: Naomi Angel (chairman), Danny Kaiser, Daniella Possek, Zadik Elyakim, Perla Kaufman, Haim Dotan and Ariye Gonen (panel clerk), landscape architect Yehudit Green and accountant Moshe Hendels. First Prize: $15,000, second prize - $10,000, third prize - $5,000, note of praise $5,000. First prize in the student program - $2,000, second prize - $1,000, third prize - $500 and the last date for submitting proposals: 12.01.03. Members of the association and students can purchase the competition guidelines at the Architects House – 14 Migdalor Street, Jaffa, for 200 NIS. The full price is 300 NIS. Details: 03-5188234.

There have recently been three closed competitions for the planning of Haifa University facilities. Bracha and Michael Chyutin won the competition for the design of the Student House out of the ten candidates who participated. The 5,000 square meter building will house the offices of the dean, the Student Union and many additional student activities. The site is located at the edge of the cliffside road, on a steep slope over the bay. Chyutins proposal is a rectangular prism composed of two main wings – the deans wing and that of the student bodies, and it is hard not to notice the clear archetypal style adopted by the firm since their design of the Theatre in Givataim.

The Lerman firm won the competition for the expansion of the library. The library, originally planned by Niemeyer in 1960, will be renovated and expanded within the borders of the university tower podium, known for the public uproar it caused at the time of its construction. The renovations will enlarge the library to suit the needs of the universitys emergent campus, and will upgrade the computerized information system and its accessibility. There will be a minimum level of intervention in the original structure, and the work will be focused around the redefinition of the relation between the interior and exterior whilst maintaining the Brutalist buildings historical significance. Nadler-Nadler-Bixon-Gil and Roni Siebert also entered the competition.

A proposal submitted by architect Haim Kehat of Mansfield Architects, took first prize in the competition for the design of the Artists House and a layout plan for the development of the north-western section of the campus. The plan proposes an additional square to connect the Hecht Museum and the planned complex. A number of ethical questions are raised concerning the common issues in all three competitions: the fact that Kehat was on the judging panel for the library competition, the list of judges was never published, the competition was held off the record, and as a result the judges comments have remained hidden to this day. Competition is an important incentive, but so is public duty.

The I.D.F. Handicapped Veterans Association held a competition for the planning of two new branches of Beit Halochem Recuperative Hostel – one in Ashdod and the other in Beer Sheva. Architect Moshe Tzur will design the project in Ashdod (planning team – Moshe Tzur, Nilli Chen, Danny Ochana, Shmaya Tsarfati). The project in Beer Sheva will be planned by. Kimmel Eshkolot Architects (associate architect Ilan Karmi) in collaboration with architect Moran Palmoni. The building is composed of two massive wings connected by a transparent passage that also houses the swimming pool.

Moshe Tzurs proposal is based on two axes of activity that intersect and border the inner courtyard that faces the sea from the side. Unlike the Kimmel Eshkolot proposal, Tzur placed the pool outside the building and transformed the encompassing walls into one of the buildings beauty spots. Both projects are based on the same programme.

A closed competition for the planning of a retirement home in Taibeh was won by architects Tommy Rigler, Osvaldo Stav and Fuad Gabara. The planning of a retirement home in the Arab sector is an innovation which can be interpreted as the result of a change in the sectors attitude towards the concept of retirement homes and their elderly population. Due to restricted availability of building sites, apartments are growing smaller and it is becoming increasingly difficult to provide proper living conditions for the elderly within the family.This served a guideline for the development of the programme, composed of four care units in keeping with supporting logistic functions. The architects intention was to give the building a 'non-institutional feeling that will enable smooth adaptation into new surroundings and lifestyle'.

It seems that the Architects Association is finally returning 'home'. Following a series of meetings held by Chairman Uri Zrubavel, the Chairman of the Governing Association, architect Adam Mazor and Chairman of the Engineers and Architects Union – Yoav Sarne, have agreed that the Architects Association, which retired several years ago due to cutbacks dictated by the Governing Association, will in fact return home. This reminds me of a (true) short story. A sheep and a wolf happily walked arm in arm through the forest. A crow who flew overhead asked with wonder, 'Where are you guys going?' – 'To have lunch', said the sheep.

Two promising events have lately occurred in the Technion Faculty of Architecture. One is the appointment of Zvi Efrat to head the Faculty of Bezalel, and the other is the election of Professor Edna Shaviv as the first woman Dean of the faculty. The second event reminds me of the story of Adam and Eve, in which God one day arrives with a choice of two 'spare parts'. He explains to them that the first part is an organ that enables one to urinate in almost every position on almost everything – whilst standing up! Adam quickly grabbed the first organ attached it to his body and ran all over the forest urinating on every tree. Poor Eve was left with the the brain. Because Edna Shaviv is also 'Ms. Climate', there is good chance that the temporary 'Brut' disturbance lead by Efrat will be replaced with climate-aware architectural thinking. Good luck to Zvi and Edna.

The Annual Landscape Architects Convention took place in October at the 'Center for Beautiful Israel'. Among the speakers, were landscape architects Gideon Sarig, Shlomo Aronson, Yael Moriah, Shlomo Zehavi, Aliza Braudo, Tali Tuch, Daphna Greenstein and Tali Mozes-Alon. Most of them referred to the local design vocabulary in the hope of reassessment of the processes undergone by Israeli society. Whereas general opinion urged simplicity and cleanliness, the guest of honor Professor Kenneth I. Helfhand spoke of 'the multi-faceted beauty of Israeli society'. Helfhand has just completed the book (with the help of a number of association members) – 'Dreaming Gardens: Landscape Architecture and the Making of Modern Israel'. Reported (faithfully) by landscape architect Aliza Braudo.

on the Verge of Architecture

Artist Orna Ben Ami reappears with a new exhibition at 'Beit Gavriel' in July 2002, entitled 'Soft'. Her works express the softness of metal in comparison to the power of femininity.

The current exhibition at the Architects House gallery attempts to direct attention towards the garden of the residential apartment building, which in general is considered trivial and rarely the subject of debate. Architects Shelly Cohen and Naama Meishar  criticize Modernist concepts for its insensitivity to non-functional spaces. It is a fact that many apartment gardens are neglected and it is time to relate to the subject. The exhibition will be open until 19/12/02.

'From Nahum Guttmans donkey to the Messiahs: the image of the donkey in Israeli culture', is an exhibition held by artist Siona Shimshi at the Nahum Guttman Museum. As usual, very interesting and definitely worth a visit. 21 Rokach Street, Neve Tzedek, Tel Aviv.

The exhibition 'The Renewal of Bauhaus in Tel Aviv' is an attempt to present Tel Aviv as the 'capitol of International Architecture'.  The exhibition will be held at the 'Bauhaus Center' at 155 Dizengoff Street in Tel Aviv, December 2002 to January 2003. At the same time, Tel Aviv Museum will be exhibiting the works of photographer Gunter Prag, who photographed Bauhaus buildings all over the country. Details: 03-5220249.

In Search of RELATIVES

Academic (f, 1.82 ) is interested in someone who is still impressed by exterior beauty but knows how to recognize and appreciate interior beauty.