Between Sculpture and Environment 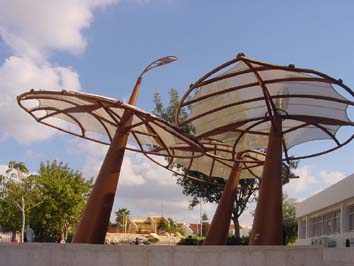 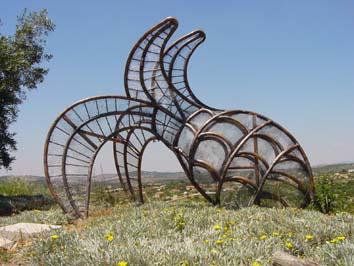 BETWEEN SCULPTURE AND ENVIRONMENT

Although artist Aarale Ben Ariehs works are usually situated in dense urban areas, he built his studio and home in a pastoral rural environment in Moshav Zafririm where he is 'free to live and create in optimal intimacy with nature'.

Street sculptures are automatically termed 'environmental sculptures', even when they don’t act as generative factors in the shaping of the environment. Architects often perceive them as decorative additions to their projects, while the artists themselves perceive their displayed works as a good opportunity for public exposure.

Ben Arieh refers to his works as 'Active Sculptures', as they create a dialogue with the environment. As an artist who 'creates an experience which aims at stimulating imagination and thought', he sees his work as a kind of religious encounter with God. He has a social perception that stems from the conviction that a visual and sensual experience can increase man’s awareness towards himself and his environment.

Although his sculptures have a sentimental and spiritual value, Ben Arieh believes that they should not be philosophically interpreted, as the environment is 'saturated with philosophical statements, which overpower the already dense urban fabric'. The symbol, in his opinion, is meaningless, as 'it doesnt transmit direct messages'. He aspires to transform trivial daily objects into a sculptured environment, claiming that although he has neither a conscious relationship to nostalgia nor defined sources of inspiration, he nonetheless work not out of a vacuum, but rather materializes his reaction to the environment.

Aarale sees every project as an individual entity, and over the years has developed a personal and liberal form of expression that maintains the free spirit of his sculptures. 'Rather than having a set style, I prefer to be innovative in every project, as it is this opportunity that instigates creative excitement'. Hence, his point of departure stems from the junction between the material and the concept. Many of his sculptures reveal the characteristics of the material and obey its codes. In this manner, topography, light and shade, vegetation, color and the human environment, are embedded in his work as organic materials. 'A kind of combination of attentiveness to specific needs, relationship to the site and the unique encounter of these components with the material. The Why and the How always coincide.'

As an artist, he claims he does not try to foresee his works as landmarks, but rather as a 'consequence of dialogue with the public'. An object with aesthetic value that is placed over an extensive period of time in a conspicuous environment can penetrate into the collective consciousness and become a distinctive symbol to the place. 'I believe that a number of my sculptures such as the Fish in Modiin; the 'Lion' in Jerusalem and the Spider in Holon, can be included in that category'.

Details are responsible for creating further interest and prolong the experience as they are perceived only after the public is motivated to stop and approach – the textures, the connections between the forms and the materials and the decrease in scale. In this respect Aarale aspires to create a visual experience 'which will attract attention and in turn present stimulation to approach, touch and discover the morphological and material complexity of the project. My aim is to reveal the frequencies and vibrations present in the materials, so as they can be accessible to the public'.