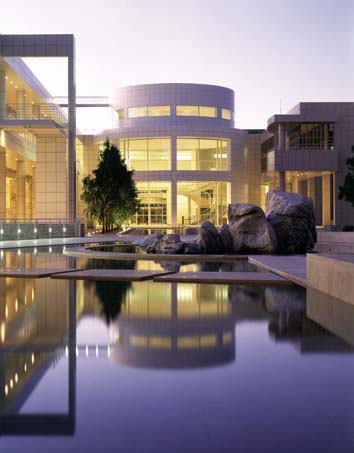 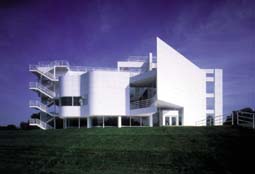 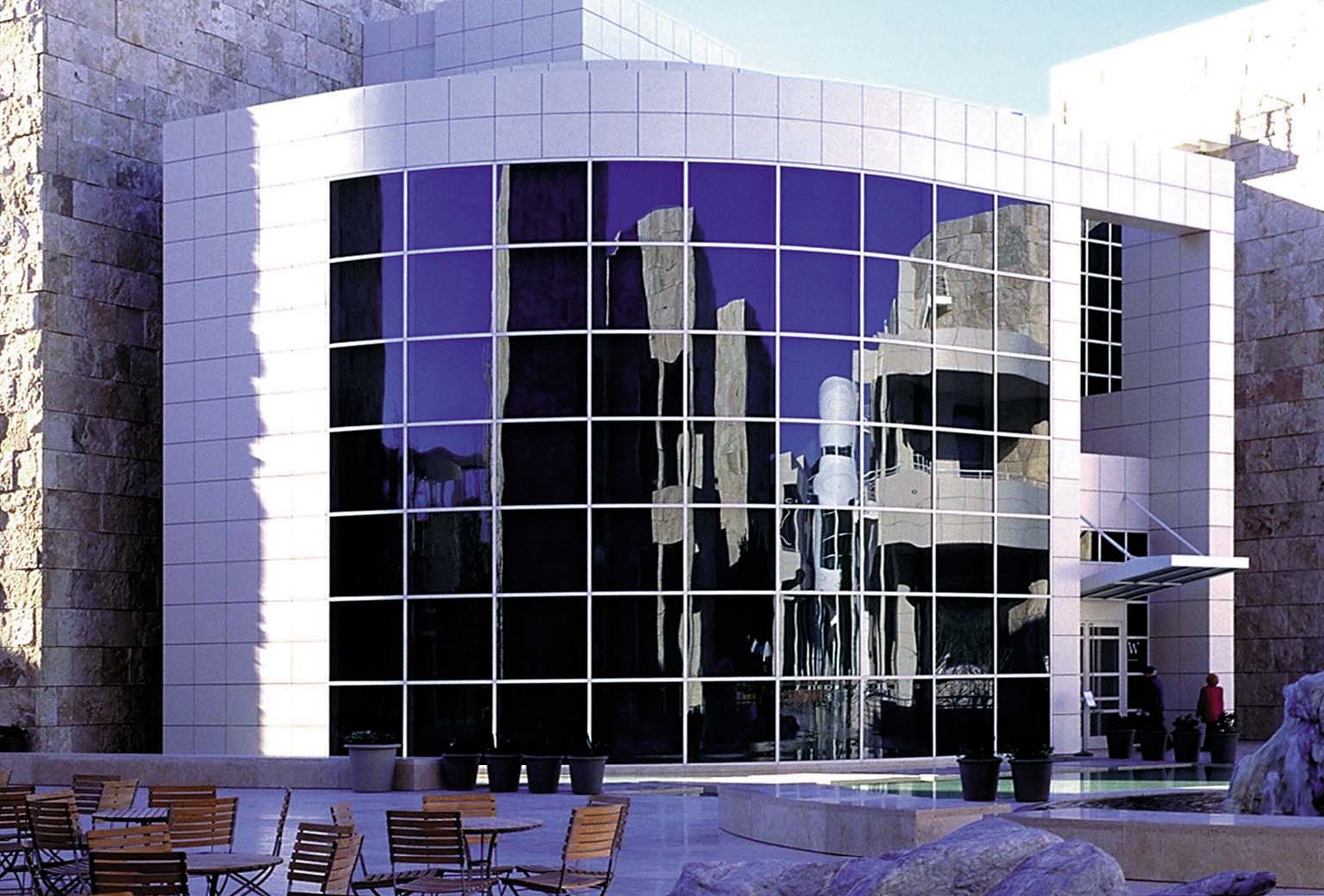 Sparkling white architecture is the most obvious trademark of Richard Meier - one of the founders of the "New York Five", which by the second half of the 1960s, included some of the leaders of the Post-Modern movement - Peter Eisenman, John Hejduk, Richard Meier, Michael Graves and Charles Gwathmey. While Eisenman (the leader) and Hejduk based their work on aesthetic sophistication, which had its origins in the pre-war abstract avant-garde work of Theo van Doesburg and Giuseppe Terragni, the point of departure for the remaining three, was Le Corbusiers Modernist interpretation. Though all five architects emphasized their commitment "to the idea of an autonomous architecture, removed from what they saw as the reductive functionalism", it was only Meiers architecture which succeeded in maintaining the visual affinity to the fundamental simplicity of Modernist architecture.

This article is not a comprehensive review but rather an aesthetic reflection expressing three of the most significant concepts of Meiers work: Light, Color and Place. The five projects exhibited here demonstrate how plain geometry, layered definition of spaces and effects of light and shade, allow Meier to create clear and comprehensible spaces. That is, his architecture stems from "the aim of creation" rather than from merely "artistic and illusive mediators". The projects are: The Atheneum, New Harmony Indiana; Hartford Seminary, Connecticut; Museum for Decorative Arts, Frankfurt; The High Museum of Art, Atlanta; and The Paul Getty Center, Los Angeles.

Defining Richard Meier as "The Last Modernist" is probably the most common error among theorists; a definition superficially based on the white facades of his buildings, which correspond to the Modernist code, by defining areas according to their specific function. However, the main issue he was focusing on as an architect, was what he termed placeness: "What is it that makes a space a place... what is that magnetic-spellbinding something that we call placeness". Thus, the issue of placeness negates any binding relation to the essence of the planning code of the International Style.

On the grounds of such theoretical definitions, it is interesting to see how space is transformed in Meiers architecture, from a rational play of forms into transcendental, quintessential forms framed by and interlaced in landscape. Especially in view of such declarations as: "Places are goals or foci where we experience the meaningful events of our existence, but there are also points of departure from which we orient ourselves and take possession of the environment. A place is something that evokes a notion of permanence and stability in us."

The Atheneum (1975-1979) is a Tourist and Information Center situated on the banks of the Wabash River on the outskirts of the historic city of New Harmony. Setting the three-story building diagonally to the river, gives the project a dynamic dimension as a departure point for the tour path. Fragments of the city framed in the windows of the exhibit space, prepare the visitor for a general view seen from the roof gallery. Here, "sense of place" is achieved through a series of visual, physical or psychological experiences, which gradually establish a relationship to the past, represented by the historic city. Porcelain panels, clear glass, constant play of wall thickness, the breadth of vistas, the height of the columns and openings which interconnect with one another, all create dynamic facades that change according to the interior and exterior experience of the building.

Hartford Seminary of Theology (1978-1981) in Connecticut is a relatively small building (3,000 sqm.), which includes all the campus functions originally distributed in various buildings: the church, Congress Hall, library, bookshop, classrooms, and administration. A building of spirituality, the integral values and characteristics of space and light are radiated without any false pretensions. As a religious introversive institution that also serves the community, the building is based on a fine separation between public and private space. The filtered light, clean forms and expressionist textures successfully contribute to endow a rather sacred atmosphere without disturbing the virtue of openness.

Meiers unique ability to express historic themes through his Modernist geometry is based on three pairs of variables: program and site; entry and circulation; structure and enclosure. Without sacrificing the architectural richness, quality, aesthetics and sheer delight of the building, he counterpoints his buildings and materials to nature. His white is never white since it is subject to constant change through the forces of nature: the sky, the weather, the vegetation, the clouds and, of course - the light.

This is clearly portrayed in The High Museum of Art in Atlanta (1980-1983) - a project that has become Meiers hallmark in many respects - a classical manifestation of his profound allegiance to whiteness. Here, the whiteness prevents the intervention of foreign aesthetics, while expressing the buildings unique plasticity through the complex relationship between the various volumes and their interaction with light. A combination of asymmetrical compositions of various types of planes and masses based on transparent straight and curvilinear walls, form the exterior of the building. Its entrance atrium at the corner of one of the four clusters presents a tribute and memorandum to the Guggenheim museum. Yet unlike the original, in this museum a majestic ramp only provides access between the various levels, while the atrium walls include windows to allow for a view of the city bringing in natural light.

Spatial clarity and visual diversity create a clear hierarchy of spaces, giving the building a "classical" expression, in spite of its asymmetrical appearance. The monastic whiteness of the interior space maintains the minimalist presence of architecture in relationship to the exhibits, while the natural light causes a constantly changing interior.

The Museum for the Decorative Arts in Frankfurt (1979-1985) is another manifestation of Meiers sense of historic order. Here, Meier converts the plan of a 19th century Villa Melzer into a public complex, reinforcing the connection with the unique historical context. Composed of two tilted grids, the plan balances the deviations of the original building in relation to the river. The choice of Meiers light and white scheme corresponds to the open character of space. Yet, unlike the use of light in Classical or Renaissance architecture, in this building the spiritual illuminating scheme of a Baroque character is adopted. Here again, illumination is not just perceived as a visual occurrence, but rather as an emotional and even spiritual phenomenon. Light and color do not just draw out the structural and functional properties of the building, but also call out an aesthetic response, creating a unique atmosphere, which generates positive emotions. Thus, the continuous dialogue between the building, its environment and its essential functionalism, acquires a didactic meaning.

Situated on a hill above Santa Monica, Los Angeles, the Paul Getty Center (1984-1997) is the most comprehensive work of Richard Meier, yet nonetheless a proof of the final decline of Post-Modernism. However, some would say that this ostentatious project recalls the timeless beauty of sixteenth century Italian villas and gardens, perhaps that of Hadrians Villa at Tivoli. The campus consists of six principal buildings that are situated on two natural ridges incorporated into the sites topography. The tilting of the plan (that has turned into Meiers light motive) is based here on the relationship between the route of the freeway to San Diego and the topographic orientation of the site.

Meiers choice of materials in this complex is quite untypical. Although the structure is clear and decipherable, it is complex in plan and overly rich in texture. The play of volumes and proportions, manifested in the cascade of terraces and balconies, flow of ramps, galleries, arcades and staircases, weave the interplay of nature and architecture, yet reflects affinity to Classical architecture.

In many respects this complex may be regarded as kitsch. Boasting of exaggerated forms, the complex is set to have supreme rule over its surroundings, reminiscent of the Acropolis in Athens. Furthermore, in this complex Meier excessively used repetitive and self- referential vocabulary. However, the complex is removed from being fetish, due to the apparent sense of belonging to a particular environment, time and place.

Thus, one may conclude that the Getty Center portrays three key points that characterize good architecture: interaction, consistency and unity. Architectural quality is experienced when "architecture can be used for a long span of time, when it ages beautifully, is original, comprehensible and simple to use".