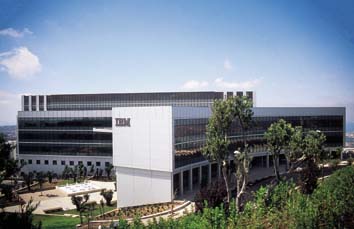 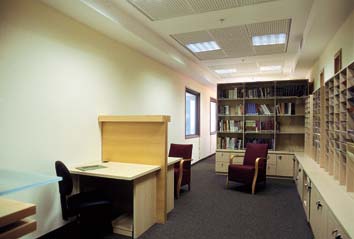 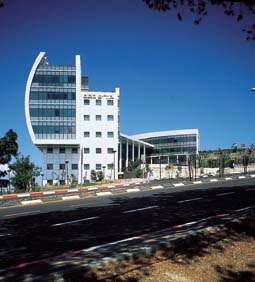 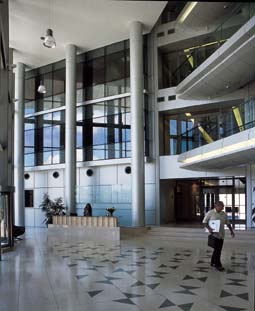 The design of a public building provides the architect with a unique opportunity to create an architectural continuity, while improving the urban fabric. The three examples presented here portray various interpretations of the principal issue that architects today try to confront: the appropriate architectural interpretation to express the relationship between the building and its physical, cultural and social environment.

The IBM Research and Development Center in Haifa is the result of an open competition held in 1996. Prepared by architect Yacov Rechter, the master plan determined the positioning of the buildings façade in relation to the plaza, yet most of the building was orientated north-south. As a result, a type of conflict was established between the two wings of the building - one four-story wing and the other, eight stories. The connection between them is made through an atrium, where on its lower level, the main entrance, the cafeteria and the auditorium are situated.

Consisting of a built area of 18,000sqm. (12,500sqm offices and 5,500sqm parking), the Center  is the largest of its kind outside of the USA. Situated on the edge of the highest range of the Carmel, it is visible from many places. A considerable effort was made by the architects to blend the structure with the mountain slope. Yet its somewhat figurative shape might have been out of proportion, had its horizontality not been balanced with the vertical adjacent structure of the Haifa University.

Large open areas orientated to the north allow natural light to flood into the public areas and the passageways, and allow the bay view to penetrate into the building. This permitted a minimalist interior design, occasionally based on the convex section of the northern wing.