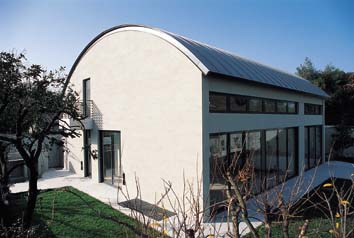 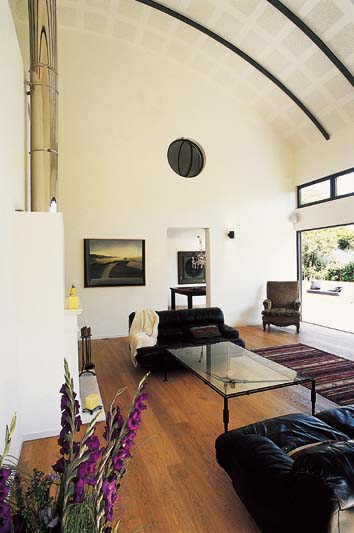 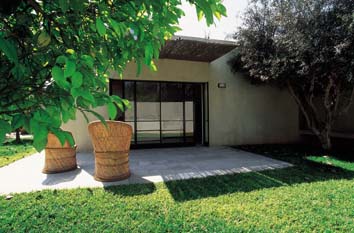 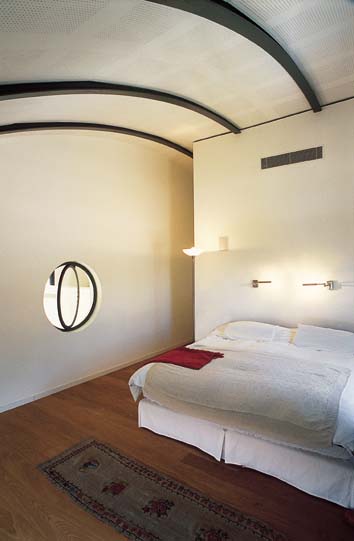 Lack of available building plots has caused a reduction in the size of plots allocated for private houses. As a result, since the house practically covers most or all of the permissible building area, architects are left with little maneuvering space. This situation poses a real challenge to employ the building itself as a means by which a dialogue between open and closed spaces is established.

It is precisely on this issue that the 'organic' architecture of Frank Lloyd Wright differs from other Modernistic movements. While Wright believed in creating individualistic buildings that 'romantically' blend into the site, other Modernists, such as the Bauhaus, were satisfied with the search for forms that 'more freely expressed the modern building technologies and industrial materials'. Other movements such as De Stijl, led by Theo van Doesburg and Gerrit Rietveld, were content with 'breaking the classical symmetry' by designing buildings of abstract forms, in the manner of Piet Mondrians paintings. On this issue, one should add that even Le Corbusier who praised the foundation of architecture on 'urban' principles and was therefore considered an 'organist' to a certain degree, created buildings whose form, like his ambition, expressed the building technology and the functional requirements, yet were still set out in the open as autonomous objects with a monumental character. The result established an international style that was most of all, disconnected from the site.

It is hard to determine which approach should be favored, but it is apparent that neither adhere to the leading Modernist principles. As for the formal principles, the advantages of a minimalist freestanding building are clear: It is compact, easy to design and to manufacture industrially, thus cheaper to build. Furthermore, as we relate to the generic principles on the plan level, the freestanding structure is undoubtedly more loyal to the Modernist code: it provides spatial expression to the functions, creates a flow of space while blurring the borders between them and generates multi-purpose space.

Although quite paradoxically, the majority of the buildings in the Western world - shrines, churches, municipalities, libraries and private buildings - stand as monumental objects in space. Eastern and Third World countries are inundated with scattered buildings - as a result of their organic development or as part of their 'natural' and more holistic outlook. It is only in recent years that the Western world has undergone a fundamental change in the conception of the relationship between the building and the site. The 'urban' code that was adopted as a response to the monumental buildings, created buildings that were 'randomly' spread out in open space. Accordingly, the term 'campus' penetrated into almost every building complex including museums, municipalities, libraries, offices, schools and private houses.

The two exhibits portray the differences between a freestanding building and an integrated structure, which enhances the relationship between the open and closed spaces.

The structure takes up most of the permissible building area, except for the north side, where the garden and the main outdoor areas are situated. The orientation of the extended facade to the north allows for optimal openness to filtered natural light penetration, eliminating the need for shading devices. This enriches the interior spaces and enhances the dialogue between them. Thus, life in the house is held within an open 'loft' space, that utilizes the whole enclosed area, through galleries and partitions, maintaining a reasonable privacy through the distribution of functions on different levels. The parents quarter is situated on the upper floor, living areas are on the entrance floor and the childrens rooms in the basement that opens onto a courtyard to the west.

The plan of this single story structure is organized as a sequence of open and closed spaces. Two central walls dissect the house throughout its length and breadth creating a division between the living areas and the bedrooms. Situated at the intersection of these axes, the kitchen is a meeting point between the 'private' and the 'public'. This, including the entire courtyard layout, enables a flow of space that enlarges the area of the house allowing every courtyard to serve a number of spaces according to the hours of the day and the seasons of the year. Following the same principle, the entrance to the house from the east is through a 'corridor' (accompanied by a bench) starting from the street, penetrating into the house and then unraveling into all directions. Use of monotonous finishing materials helps the building merge into it’s surrounding walls.