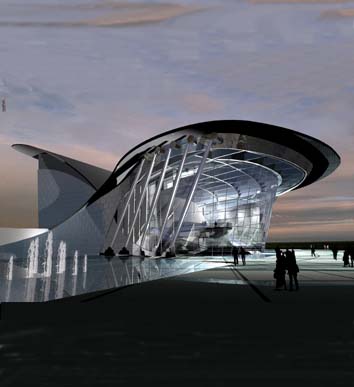 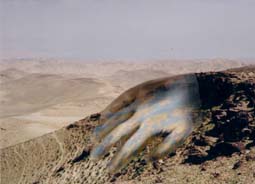 The memorial and documentation site of Bergen-Belsen declared an open competition for the design of the expansion of the Documentation Center and its adaptation to the latest documentation methods. The project, which will include the renovation of the entire site, will be held in two stages and will call for the establishment of a design team to include an architect as well as a landscape architect. The language of the competition is German, with an English translation.

The winning proposal for the competition to design a memorial site and community center for the Jewish Community of Kiev was granted to Plesner Architects office (see related article in this issue).

David’s Victory (over Goliath) Organization in collaboration with the Keren Kayemet and the Jewish Agency, declares an open conceptual competition for the design of a memorial site to commemorate “David’s victory over Goliath” (heavens above) on the slopes of the Ha’Ella Valley. Sculptors, architects, landscape architects and artists from Israel and abroad, are invited to participate. First prize – 45,000 NIS; second prize – 13,500 NIS; third prize – 9,000 NIS. The competition criteria are available for the sum of 200 NIS in the offices of  “David’s Victory Memorial”, P.O.B. 8201 Jaffa – 61082. I would go for it.

The winning proposal in the competition for the design of Cellcom Complex in Modi’in was granted to Mann-Shinar Architects office, after reaching the final stage against Moshe Tzur’s proposal. This large and comprehensive project will grant the office, which has already attained remarkable achievements, a further opportunity to express its capabilities.

Architect Margalit Suchoy won the competition for the design of Tel-Hai Avenue in Kiryat Shmona. The proposal, which was based on the use of black basalt stone and white joints, red tiled roofs and a few arches, expresses criticism on the “housing” reality, which eradicates the unique identity of the Galilee. The architect hopes“ The Avenue will symbolize the beginning of the transformation, which will reinforce Kiryat Shmona as a regional city and center of tourism”.

And as regards to hope: An open competition will soon be declared for the redesign of the Tel-Aviv Harbor area. The company "Dead Sea Works Treasure", responsible for the management of the harbor, drew up a first draft for the program as a preliminary preparation for the competition soon to be declared in collaboration with the municipality and the Architects Association. The intention is to transform the harbor into a well-designed place of recreation, culture, sport, shopping, gastronomy and creation 24 hours a day.

Architect Nazia Huri from Haifa, was invited by the Dalyat–El-Carmel and Ussafiya Council in 1996 to plan a school. Dalyat-El-Carmel’s Council decided in the end to turn the project over to architect Tony Barter. Huri, after having received the sum of 50,000 NIS in compensation, proceeded to appeal to court, and it was finally agreed that the Council of Dalyat-El-Carmel would supply him with design work for the total sum of 120,000 NIS, and with this, one can manage for the week.

Mrs. "Preservation" architect Nitza Szmuk, was fired from her position as architect responsible for the important issue in the Tel-Aviv Municipality. Szmuk, who succeeded in advancing the issue in one of the most neglected cities in the world concerning preservation, became a real burden on every architect or entrepreneur who had to erect a building that was declared preserved. As we know, there are two faces to every coin, and what someone may consider as "good preservation", can be seen by another as insignificant hard-headedness, especially in the case of building additions that should not hide beneath an old and irrelevant apron.

The Local Council of Tel-Aviv – Jaffa, authorized a briefing for the design of the Manshiye compound. Eight hundred apartments are planned in that area – a small number compared to the grandiose plans authorized in the past. A team headed by the City Engineer, Danny Kaiser, handed in two proposals to the council: The first – designing the entire compound to include low-rise 3-4 story buildings and one residential tower on the southeastern side. The second includes the design of 6-7 story buildings on part of the area.

‘The Dan City Society for Sanitation’ plans to build a Recycling Park at Hiriah on an area of approximately 60 acres. The park will take three years to complete, and will cost some thirty million NIS. Modern facilities will treat the “environment friendly” waste, which will proceed to be used as raw material. Energy and fertilizer will be produced from home waste, and the concrete waste will be grinded and employed as raw material for building and as bedding for roads. Architect: Amos Brandies.

The Steering Committee established by the municipality to develop the northwest section of the city selected the plan of Kolker-Epstein-Kolke’s office, to transform the area between Sde-Dov and the Country junction into a residential area integrated with commerce. The main innovation in this area of Tel-Aviv (750 acres considered to be the city’s largest land reserve) is in the creation of five broad avenues opening out to the sea. A beach park will be built in the area of the Tel-Baruch coast. The plan will be realized within a period of five to ten years.

The Israeli architectural exhibition at the International Architectural Conference in Berlin has been cancelled. Chairman of the Israeli Architectural Association, architect Uri Zrubavel claimed that the treasurers Rafi Segal and Eyal Weizman mislead the members of the Steering Committee, and instead of a balanced exhibition portraying a comprehensive review of the Israeli Settlement project, they focused one-sidedly on the settlements in the Occupied Territories. The map of the West Bank appears as a red stain on the cover of the catalogue designed by David Tartakover, on the background of the caption "Civil occupation". I recommend that the association re-examine to whom and for what they award prizes.

And as a direct continuation: The Architectural Biennale in Venice will be held this year from September 8 to November 3. This year’s treasure is Deyan Sudjic. The exhibition attempts to reveal the next decade’s architectural form. The 100 selected projects that are mostly futuristic, are intended to be realized and will not remain a speculative fantasy. The curator of the Israeli pavilion, architect Zvi Efrat, chose like the curator of the exhibition in Berlin, the "sensational" revelation that architecture determines facts (political) on the land, and called his exhibit “Border disturbance”.

The two exhibitions were held at the Architect House in Jaffa, under the title “The Israeli Pavilion”, curated by architect Shelly Cohen.

The new auditorium inaugurated in June on the festive occasion of the prestigious Dan David award nomination, will serve as the formal space for graduation ceremonies, various conferences, musical performances and the permanent meeting place of the board of trustees. The plan was shaped by the programmes functions - conference hall and a spacious reception foyer: The auditorium - an opaque box is contained within the foyer - a transparent box. The auditorium includes 1,200 seats and has minimal service areas, allowing also for orchestral concerts to take place. Architects: Yasky-Sivan-Yasky.

The cornerstone of the Ashdod Auditorium has been re-laid. After the Japanese architect Shin Takamatsu planned the building in the past, someone remembered that Israeli architects are also capable of planning "Japanese buildings. Hence, architect Haim Dotan designed an impressive project, whose shape recalls shells, waves or a whale’s mouth, easily connecting to the coastal city  inhabited by thousands of artists over the last few years of immigration. Architects: Haim Dotan, in collaboration with Avi Arbel.

The Main Municipal Library "Info-Tech is being built in the compound of the Petach-Tikva Municipality. The building is set in a 4,000 sqm. area and will present the next step of  occupancy, corresponding to architect Roni Seibert’s plan. The library will utilize the most advanced and innovative technologies.

In Search of Relatives

A report draft written by a consultant to the Architectural and Engineering Registrar, determines that the School of Architecture in Tel-Aviv University does not provide the basic tools and essential knowledge to its students. This holds true in the three other architectural schools – the Technion, Bezalel Academy, and the Judea and Sameria College. To my personal knowledge, they are all lacking a basic understanding of construction, use of materials, the meaning of architectural space and its relationship to the environment. Professor Barzaki, who was one of the founders of the school eight years ago, is completing her tenure, which will be filled either by Prof. Moshik Margalit or by Hillel Shoken – both senior lecturers at the school.

The final project of Eli Har-Tuv from Ort Career School dealt with the conversion of the Kohav Cinema in Ramat Hasharon into a cinemateque. It is a good idea and is worth examination.

End of year project of Tamar Lev-On, third year student at the School of Architecture at Tel-Aviv University, dealt with an extension of the Ben-Gurion University in Arad. The project is part of a combined studio project to plan a neighborhood in Arad, where every student focuses on a specific function, taking other projects and area conditions into account. The idea is to develop a new language that will emphasize the importance of the “nothingness” created between well-designed buildings.

The Israeli Standards Institute launched a new CD-ROM containing all the Israeli standards in the building field - 600 in number. The CD-ROM which will updated every three months, is available from Orit Yagil, at Tel: 03-6465116.

"Keter" and the Jerusalem Institute for Israeli Research published the book "Jerusalem Architecture" in an elegant edition. A new chapter dealing with the development of new trends in modern architecture completes a comprehensive and professional survey of the history of architecture, edited by architect David Kroyanker.

The book “40/40 Architects From Finland” edited by Roger Connah, presents selected works of 40 young Finnish architects under the age of 40, with photos, plans and images. Costs 40 Euros. Order directly from:  www.rakennustieto.fi