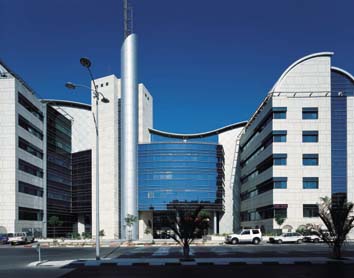 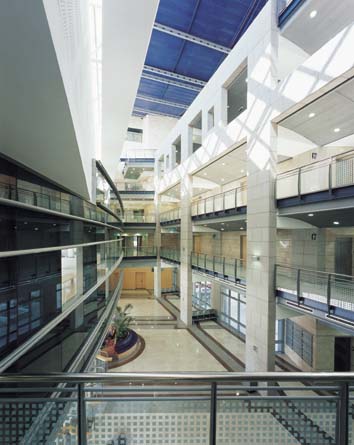 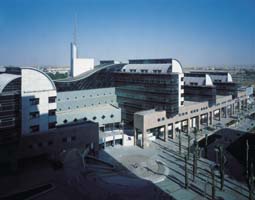 Efforts to institutionalize Beer- Sheva as the civic center of the southern region of Israel, have recently been reinforced with the completion of the Government Offices Complex. The complex which includes thirty government offices and a rabbinical court, consists of five buildings interconnected by long passages. The passage on the lower level includes a series of shops (similar to a shopping mall), a health service and coffee shop. The upper passages connect the various offices.

The dispersion of the offices according to required area specifications, and not respectively to the building clusters, creates a relatively complex system, yet enables mobility corresponding to need. In this situation, the three atriums that connect the clusters horizontally and vertically, contribute to the ability to "read" the building and thus improve the circulation system.

Climatic awareness is expressed in the employment of curtain walls for the northern facades, as opposed to shaded stonewalls for the southern facades and a relatively opaque service wall along the western facade. The atria which separate the buildings enable ventilation and penetration of filtered light, though they somewhat annul the architects’ attempt to reduce the surrounding surface relatively to the built area.

Beer-Sheva’s train station created a new urban reality - a city gate solely for pedestrians. Thus, the creation of a pedestrian mall that forms a connection between the train station, the Government Offices Complex, the Court, the Municipality Building and the university, is a logical solution. Yet, when the design of the opposite side of the street is not even on the agenda, it is difficult to determine to what extent the Government Office Complex will transform into an urban center bustling with activities. It is reasonable to assume that it will enrich the environment with a large crowd during the day, though it is doubtful whether government offices, whose employees end their workday in the afternoon hours, will succeed in converting the environment into an active center during the evening.

Perhaps a more fundamental question should be – is such an independent complex with its offices, shops and cafes, not a sure prescription for the reduction of traffic in the pedestrian mall?

Since the Post-Modern structure is inundated with architectural quotes, it is difficult to discern a clear and direct expression of the desert context, or to the ancient city it is intending to replace. The time passage between the preliminary design stage and the building execution seven years later, probably created a certain breach between the winning design and the architectural reality, which calls today for more restraint. Yet it seems that is the price society has to pay for the existence of despicable bureaucratic processes.

According to the architects: "The complex is an attempt to convey cultural contradictions and local elements through the employment of modern technology."