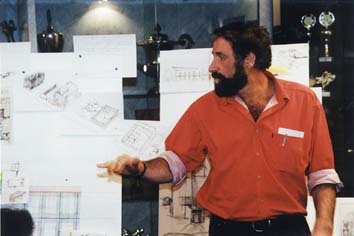 Its all in the coffee

Its all in the coffee

From the Editors Desk

Galloping up the stairs of an apartment building on a Friday morning, I recalled an article once published in Architecture of Israel, entitled: 'Architecture is your Neighbors Cooking Aroma'. Avoiding the comfort of elevators in order to exploit every 'fitting' chance, I breathed in the smell of a Moroccan 'ghrayme' on the first floor, Gefilte Fish on the second, chicken soup on the third, fourth and sixth - until I reached the aroma of my choice - that wonderful smell of roasting coffee which uplifted me at once to seventh heaven. Just before landing, I remember bookmarking the thought: a cup of coffee (just like a cup of tea) is the widest common denominator of all cultures.

The smell of roasting coffee evokes many associations. For workaholics, it is the sign of a new productive day. For those exempt from pay-checked boredom, it signals the afternoon news bulletin. Coffee is in fact a code of behavior reflecting human relations: 'let’s get a coffee' explores the possibility of a relationship; 'come over for coffee,' warns that no food is included. And in the Netherlands, the 'Coffee Shop' offers a variety of substances.

Yet as prevalent as it is, the origins of coffee-drinking are shrouded in mist. One story goes that an Arab goatherd named Kaldi, back in the year 850, found his herd behaving strangely one day. Instead of grazing quietly, the goats galloped and played with unusual zest. Perturbed, Kaldi ate the berries of the bush his goats were nibbling on, and soon he too was dancing like a goat. From there, coffee made its way to India, where, the story goes, a 17th century devout Indian Muslim named Baba Budan brought seven coffee seeds  back from Mecca. He planted them in Chikmagalur District of Mysore, on a hill that carries his name to this day.

Another story tells the rest. All of southern India was covered with plantations of coffee plants, the thin evergreen bushes bearing dark glossy leaves, and flower clusters of white, fragrant, jasmine-like blossoms. From there, with  the assistance of the British Empire, it spread to cover the whole globe.

Roasted and ground, the green and red fruit finds its way into every cup of coffee, wherever it is. On the basis of the axiom that architecture expresses its culture and culture is perceived through its aromas, one may conclude that architecture is like many cups of coffee.

The lesson: One can prepare ones coffee any way one likes.

P.S. Beware! One mans cup of coffee is anothers cup of tea.