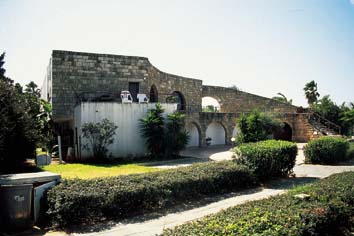 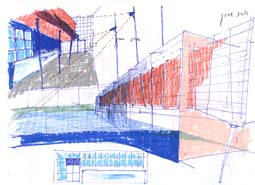 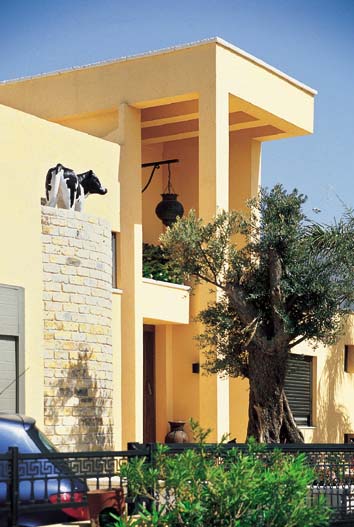 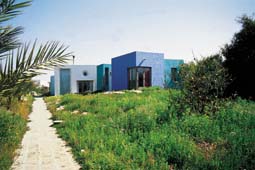 Most Israeli architects believe that Israeli architecture generally reflects a raucous infantilism expressing a lack of taste and at times a sheer lack of culture. Even when appropriate architectural thought has been invested, it is lost among the surrounding experiments and never-ending search for identity. This is commonly explained by a number of theories: lack of control over the client’s fantasies, repetitive attempts by architects to reinvent the wheel in an effort to gain presence, and an overall absence of continuity in architectural culture.

Others maintain that what is seen in reality expresses precisely the cultural conflicts characteristic of Israeli society, and 'we have just got to live with it.' However what we are witnessing is actually a lack of concern toward the built surroundings and a continued unresponsiveness toward the rapidly-deteriorating natural environment. This is precisely where the role of architecture as a purposeful discipline responsible for the physical expression of society is best articulated.

Caesarea was chosen as the site for an architectural chamade because it is a growing town offering a wide range of depictions of 'Israeli architecture' and its residents have the will and financial means to bring about change.

The illustrations accompanying this article speak for themselves: architects are granted budgets and a free hand in order to realize their clients’ fantasies – and they interpret this as an opportunity to realize their professional freedom of expression. As a result, you can find the struggles and pains of Israeli 'build your own' architecture, but also buildings which express architectural and social values. These values are all lost when architecture places the individual ego at its core, disregarding landscape and historic values.

The most prominent development in Caesarea is the gradual reduction in lot size. While in neighborhoods built up during the sixties and seventies, the building lots were the size of a farm property, today’s lots, such as those in Neighborhood 13, are down to about 600 square meters only, with greater reductions anticipated. As for the building style, In the sixties and seventies, block houses were coated in textured plaster; in the eighties they were painted in an effort to resist uniformity. Later on, attempts were made to express a connection to the place with the symbolic use of 'local' stone or 'harvesting' of relics of ancient stone columns, many of which are still scattered in the area.

During the pseudo-contextual era of the nineties, many houses developed reflections of the aqueduct motif, which was erroneously viewed as the only well designed structure in the area. In commemoration of that era, one street contains a collection of all the possible variations used.

The Israeli tendency to stand out in ones surroundings is even more prominent in Caesareas historic area where the beach and dunes are ornamented splendidly with natural greenery. A house with a sculpture of a cow at its front and a jug as its doorbell at the entrance of a church, humorously articulates the architectural quandary. Others import ideas from America, Morocco and the Far East. Nontheless, local representatives invited to participate in the chamade, were quick to point out that citizens of Caesarea are very pleased with their homes and have no desire to replace them with any alternative. In this respect, one can only praise the Caesarea Development Corporation that has determinedly blurred many of the glaring discrepancies among the many houses with carefully cultivated greenery.

The purpose of the chamade, fruit of which can be seen ahead, was to promote 'the build your own' architecture, using Caesarea as a model. Taking place in Caesarea Golf Club, the chamade hosted a panel of ten of the country’s leading architects:

After a short tour of Neighborhood 13 the participants were asked to design a conceptual model of 'an Israeli house' within the context of the site. Since most of the architects described the situation in Caesarea neighborhoods as 'an extreme expression of build your own architecture', they emphasized the need to relate to groups of buildings, rather than focusing on a single unit.

Hillel Schoken claimed that Caesarea exemplifies all the problems of Israeli architecture today, and not just those stemming from build your own projects. This, he explains, is a result of a lack of architectural culture. 'Vociferous houses, imitations and lack of professionalism, can never grant any sort of identity to a place with such historic and natural values. The residents pride, wishes and fantasies must be heard and employed, but without damaging public property.' Schoken therefore proposes to build 'simple buildings, quiet and polite, with interior courtyards in the spirit of the Romans.' He recommends that individual pride and fantasies remain hidden, and that buildings respect their neighbors while demonstrating awareness of Caesareas unique climate and social and historic conditions.

Gadi Heller identified the root of the problem on the neighborhood plan level. 'The neighborhood is based on a network of checkered streets, lacking in any identifiable hierarchy.' He feels this causes confusion and lack of orientation, and proposed 'a system of cul-de-sacs along a central axis.' His assumption is that these streets will function as semi-public living rooms, creating a continuous line of houses reminiscent of historic cities, behind which the residents fantasies will be released. Meanwhile, Heller suggests a dictated programme based on a three-floor house, to be organized, much like Schoken suggested, around a 'Mediterranean' patio open to the back yard.

Ramy Gill went even further and suggested the establishment of a continuous 'street wall' meticulously designed to 'hide the houses behind it and modify the fantasies of both the architect and the resident.' Gill claimed that the reduction in size of the allocated sites creates a situation in building is forced upward, emphasizing the lack of harmony among Caesareas neighborhoods. Like Heller, Gill feels the houses should be placed at random on the site, as long as it does not occupy more than fifty percent of the plot.

In contrast, Arad Sharon favored gaps between buildings, with cultivated greenery protecting privacy. 'In private homes the garden is an integral part of the building and there is no reason it should not be included in the plan.' He suggested minimal interference at the house level, and abandoning of urban pretensions which are unsuited to the rural pace of life. 'The area’s homogeneity will be achieved through a well defined grid that will act like notes on a musical bar. The capricious combination of the residents will compose the music, and will not necessarily damage the harmony of the area.'

Galia Weiser put forward the rhetorical question, 'How to plan a large house on a small area and make it look like a small house on a large area?'. Her definition of the current situation is 'an orchestra without a conductor,' and she suggests certain limitations be placed on the positioning of the house on the land, as favorable to the overall creation. In her opinion, only proper orchestration of the allocation of built and open spaces, with emphasis on a common denominator, will allow for an acceptable personal expression, and not harm the general resulting product.

Under the headline 'Caesarea, for example', Ami Shinar proposed the creation of an integrated neighborhood with a common denominator. Shinar, who recently completed research on the subject of population density and vertical building, emphasizes that rising population does not necessarily have to damage the quality of houses, naming Neve Zedek (a refurbished neighborhood in Tel Aviv) as an example.

Daniel Mintz (who insisted on speaking in abstract terms), searched for the relation between 'The Memory of Place' by Danziger and the 'Forgotten' by Moshe Kupferman. Mintz suggested building 'double vision' with 'transparent structures'. Or in plain language, structures that will enable the realization of the Israeli yearning for roots on the one hand, and an acceptable expression of the 'urge for contemporary building,' on the other.

Tzvi Harel, who is used to relating to architecture as a constant tension between abstract and concrete, successfully combined the Danziger 'memory' motif and the 'forgetting' of the fact that Caesarea was and is (according to him) a the city of ‘rulers’. The city in which Herod used imported water to supply his bathhouses is today a town of wealthy residents importing water to nurture their lawns. 'Everything is clean, treated with care, you can even eat off the floor, and no change is necessary.' His sketches were explained with his own memory of Danziger, who was his teacher at the Technion. On one of the tours with his students, Danziger pointed to an abandoned house with a eucalyptus tree and stated, 'The house is crumbling while the tree survives.' Meaning that nature is more enduring than man’s creations.

With a little less sympathy for the 'lords' of Caesarea, Jerusalem architect Yaacob Molho sees the essential difference between the conservative building culture characteristic of Jerusalem neighborhoods, and the lack of identity so characteristic of Caesareas neighborhoods. Much like those before him, Molho pondered the level of restriction that should be placed on the freedom of expression in private building, which he likens to 'a museum of architectural monsters which do not in any manner express the real needs of the residents.' Molho proposes the building of clusters of two-floor houses expressing an acceptable balance between personal identity and the image of the neighborhood.

In contrast to those using the 'field is uneven' excuse, Joyce Oron accepts the rules of the game as a limitation that must be dealt with. Like Arad Sharon, Oron sees the remote building positioning as a method of regulating the siting of houses in relation to the street, with greenery moderating the distance between the houses. 'Alignment of houses along the street line would only increase the dissonance, and cancels the possibility of modifying the differences and cultivating commonalities.' Thus, she proposes the repetition of selected elements, to be adapted throughout the neighborhood in several variations.

Although all the architects invited do not view the tiresome expressionism of Caesareas neighborhoods a model of good architecture, the workshop produced an inevitable articulation of widely differing attitudes. The resultant debate was generally centered on the question of 'how is it possible to identify a common denominator and turn the chaotic situation into a coherent product.'

Half of the architects present sided with the creation of a continuous urban line, while restricting the planning patterns. Some of them even went so far as to suggest a wall to hide the buildings behind. Others sided with the organic method upon which the facades of the house create a kind of 'street wall'. In my opinion, the method used in  urban quarters like Tel Avivs Allenby Street, Yemenite Quarter or Neve Zedek, is unjustified in an area where its rural quality is an end in itself.  In such places, there is no legitimacy to blocking expression of individual needs and fantasies as long as they do not harm their surroundings.

The solution found in more conservative buildings is more relevant to the Israeli reality, but with much less ego present. When the differences are more subtle, an area with a defined architectural code is created, like in the use of International Architecture in 1930s Tel Aviv, when cultural integration was at such a critical stage. When there is a common code there is plenty of room for free expression of individual needs, without harming the interest of the whole.

Architects interested in participating in similar sessions are welcome to suggest areas of interest; the number of participants is limited, and the selection depends on the editorial boards decision and areas of interest.