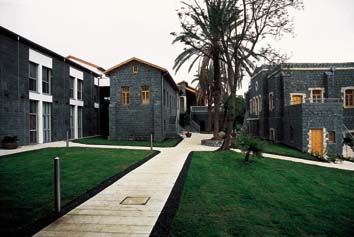 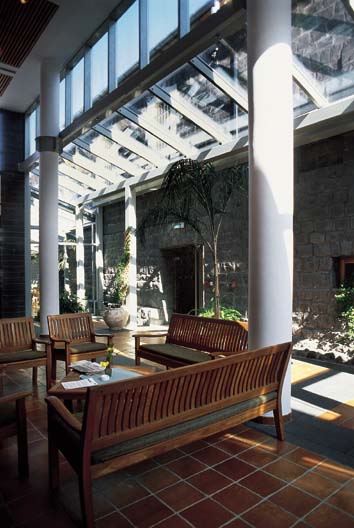 Hotel Pundak Ramon in Mitzpe Ramon - a small town in Israel’s southern Negev desert - is hardly likely to make architectural history, no matter how you look at it. Eight years ago, the hotel owners converted two 1960s development town apartment blocks into a pleasant inn. Their brave undertaking deserves some credit but doesnt absolve them from a little criticism.

Lets begin with the elevator issue. Subjecting hotel guests to climbing five flights of stairs should be made illegal. Surely, with a little initiative, an experienced architect like Yehuda Feigin could have devised a way of converting at least one of the original building’s eight stairwells into an elevator at a reasonable cost.

Secondly, the matter of window shades. The owners have surely realized by now, that while heavy drapes may go some way to softening the harsh light, the rooms still heat up like ovens. Obviously, the utilization of modern window shading devices or even old-fashioned shutters would go a long way to relieving guests’ discomfort caused by the onslaught of the direct afternoon sun rays. Hence the savings made on reduced air-conditioning could underwrite the cost of elevator construction.

Next - interior decoration. The design concept is outdated and fails to utilize the places natural light and beautiful desert landscape.

On the other hand, building a hotel in the center of a dull town is a brilliant social initiative that should be replicated elsewhere. Some 10 per cent of wage-earners in this town of 6,000 are unemployed. Local legend has it that when the newly-opened hotel had difficulty in recruiting kitchen staff, local families pitched in and prepared meals, setting the tone for the excellent professional ‘home-made’ cuisine offered today.

The Pilgrims Hostel, Karei Deshe, Tabgha, in a corner of the National Park on the north-western shore of the Sea of Galilee, was built in 1899 to house pilgrims visiting the region’s holy sites. Owned by The The German Company for the Holy Land, the hostel was abandoned during World War Two, and since the establishment of the State of Israel, the historical buildings have served as a youth hostel. The site has recently been refurbished and extended, in an attempt to restore its original role as a hostel for pilgrims. The project was planned by Guggenheim-Bloch Architects in collaboration with the Rossini firm of Cologne, Germany.

The goal of the project was to preserve and refurbish the existing buildings while forming an elegant connection to the cluster of new buildings. It is a classic example of appropriate integration into the landscape while taking maximum advantage of the site. The modern use of local building materials and continued development of the place’s traditional symbolic details has been done with great sensitivity, without artificial dependence on existing elements. Thus carved volcanic stone, decorative paving, stone arches, and an acceptable number of concave ceilings, exist together in harmony.

Particular attention was paid in developing the site to preserving the unique greenery cultivated over many years by botanist Shlomo Ilan, long-time manager of the youth hostel.