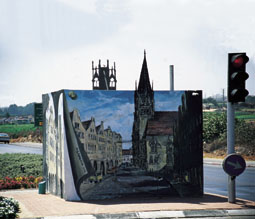 Graffiti is the oldest known form of visual expression. The term comes to us via Greek and Latin and is commonly used to refer to the dissemination of personal messages on public walls. Although often considered as vandalism, graffiti as a spontaneous expression, free of editing or censorship, is of primary documentary value. The question is, where does one draw the line between worthy street art and criminal damage to property?  Graffiti is the medium of choice for individuals seeking public exposure, as well as means to revealing the authentic pulse of society. It is an art form introduced into the public realm usually undercover, and often as a vehicle for messages of a political, cultural or very personal nature. The most common expressions of this spontaneous protest are writings or drawings on walls, stone fences, concrete bridges or train stations. Often carried out in secrecy under time constraints, the graffiti artists often limits his messages to specific and precise statements of love, politics, obscenity and pride: 'Marry me Susan”, “Bin-Laden or Bust', 'Sick my Duck', 'I love New York', and so forth.         Graffiti by its nature has a short shelf-life and the borderline legitimacy of its creation leaves its artists on the fringe, and often without financial support or commission. Unlike institutionalized and sponsored art forms, graffiti artists are set apart by their ability and talent for producing, quickly and under pressure, creations that would otherwise require the investment of time and resources. Thus it can be inferred that institutional artworks – those meticulously planned and carried out in undisturbed daylight – are not a hurried spontaneity, and their categorization as conveyers of authentic messages may not play out.

Fine examples of documentary information derived from graffiti can be seen all over the world: Hieroglyphic writings carved into the walls of structures from the time of the Egyptian Pharaohs; Hamorabi writings on a Babylon grave during the second century B.C.; the scripts scratched into the walls of Masada; the writings on the walls of the Holy Sepulcher Church in the Old City of Jerusalem; and the walls of  almost any ancient building of historic importance. Also of significance are the fresco paintings discovered in the Minoan castles on the Greek islands of Santorini and Crete, and the wall paintings in the Spanish cave Altamir, and in Lascaux in France, where cavemen of the Paleolithic era depicted animals in colors drawn from the earth.

The American graffiti artists of the seventies gave the activity a new dimension. Aided by the invention of aerosol spray paint-cans, their words of protests quickly morphed into colorful rich murals appearing over night on public buildings and facilities in the urban setting. Street gangs began to mark the borders of their neighborhood territory, and to convey messages of dominion. Seeking ever-larger canvases, they turned to subway train tunnels and even to the trains. In Philadelphia, graffiti artists Cornbread and Cool Earl quickly gained notoriety for their blanketing of the walls of the underground rail network.

In New York City, Keith Haring was prominent, and then Jean-Michele Basquiat, who was adopted by Andy Warhol. In 1971 an article was published in the New York Times about a graffiti artist who had spread the name TAKI183 all over the walls of the subway. Keith Haring, a delivery boy who took advantage of his many train rides to reveal his work to the audience of passengers, became a legend. Over time he developed and adopted new styles and created his lettering, often emulated by a growing crowd of groupies. Graffiti quickly became the thing, under its new name 'tagging'. Tagging was unique in its direct connection to street gangs, who accompanied Rap and Break-Dance music with graffiti.

In the mid-eighties the public transport authorities waged a war on tagging activities, increasingly seen as an affront to the environment. After a considerable allocation of funds, the subways were cleaned up, but not before street artists had already achieved world fame. Graffiti artists like Keith Haring and Jean-Michel Basquiat began their careers in the streets of New York City and made their names as respectable artists in museums of modern art.

The Berlin Wall was probably the largest and most important canvas for graffiti artists of the twentieth century. The protest writings which appeared immediately after its establishment in 1962 expressed citizens’ frustration at limitations on their freedom of movement. Gradually, murals and artistic paintings began to decorate it – some created by important artists. With its destruction in 1991, the Wall’s preservation as the most authentic art work of the twentieth century led to the sale of large chunks of masonry to museums throughout the world; thousands of fragments were snatched up for good prices by the hordes of tourists to the unified city.

The recognition of graffiti as a legitimate artistic endeavor has allowed the liberation of prominent mural painters, and their ranking among accepted artists while remaining as the voice of rebellion. The transformation in labeling from 'vandals' to 'street artists', means that works can now be commissioned by establishments and authorities. Yet while this institutionalization may enable the utilization of the talents of graffiti artists to temporarily conceal a decrepit urban landscape, it also reduces the authenticity of the art form. A fine example of this process is the huge mural painted by a group of French street artists on the wall of a residential building on Agrippas Street in Jerusalem. This 'graffiti' was recently inaugurated by the city’s mayor and council members. Although the painting demonstrates technical skill, it is doubtful that its synthetic message expresses the authentic color which characterizes the adjacent Mahne Yehuda street-market.

Todays graffiti artists have access to a range of high-tech aids, as well as home printing for the production of flyers and announcements in a very short time with little investment. The most popular techniques borrow from the Pop Art of the sixties the telescopic enlargement of comic drawings (Roy Liechtenstein), science fiction or just regular perverse contents flavored by dark humor. Because of the obvious limitations in showing such pieces in conventional galleries, virtual museums are being established on web sites, purpose-built for exhibiting thousands of artworks. There are also virtual “walls” for graffiti fans and amateur artists who invite anyone interested to write their message and post it on-line.

The most prominent of street artists in Israel is artist Rami Meiri, graduate of the Avni Institute, who gained public recognition through a number of murals scattered throughout Tel Aviv. His paintings excel in their expression of spatial depth and realistic content, but the relevance they hold to the term graffiti is limited. Despite the fact that his 'canvas' is dictated by public officials, Meiri sees in his works a personal expression and is unwilling to compromise the content of his paintings. He makes a proposal, the municipality accepts it – or not. Lately, a dispute between Meiri and the mayor meant that Tel Aviv is lost to him as a canvas, and he is seeking new horizons in the suburbs.

Although not every writing on the wall is a work of art, and not all street art is graffiti, it is important to mention a number of relatives. Billboard advertisements, some of which have adopted the authenticity of the spontaneous graffiti message; underground train ads which leave no space for intruders; giant billboards covering entire spans of centrally located buildings, from which beautiful models smile down upon the city; the huge protective canvases covering buildings under construction or refurbishment, and finally the eternal sidewalk artists who spend hours on their knees painting optimistic chalk drawings to win the momentary admiration of passersby.

Although graffiti expressions, especially the institutionalized ones, are largely free of vandalism these days, graffiti still reveals a longing for an alternative reality, a dynamic dimension and a nostalgia where none exists.