Entries, Exits and IN Between Doorways 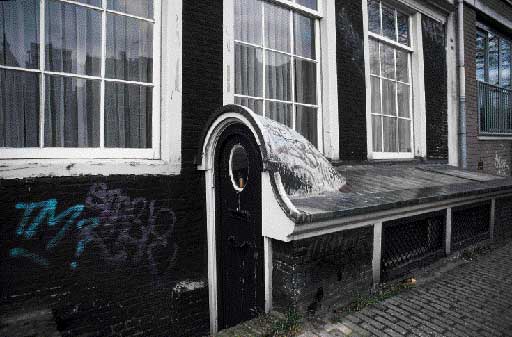 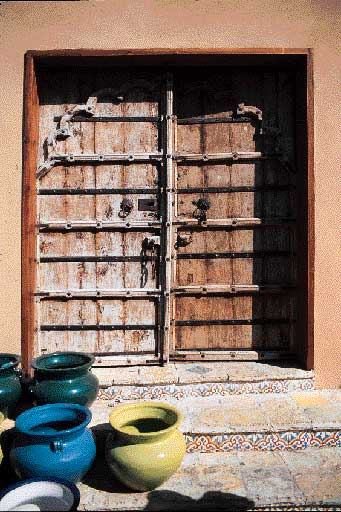 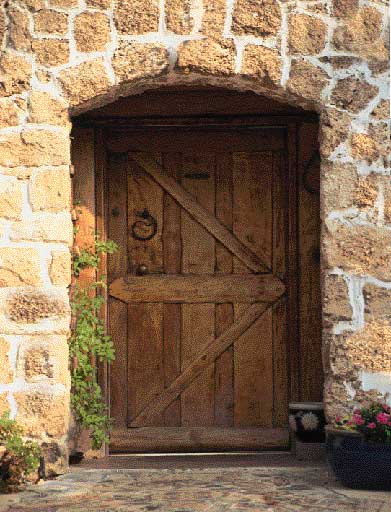 Entries, Exits and IN Between

Enter the word 'doorway' into an internet search engine, and it will list 216 web sites, of which some 150 are churches or other religious buildings. This illustrates the extreme ceremonial value of the doorway. Yet a closer look at this important architectural detail, which actually connects any building to the outside world, reveals its true cultural complexity. While some cultures invest much effort in decorating the doorway, others humble and even hide it. Greek architecture regarded the doorway as a ritual element of great social significance, expressed through symbolic ornamentation. Accessibility to the building was determined by the pronaos - a front room which functioned as buffer zone between the public and the occupants. During early Christian times, the doorway was considered the most inferior part of the church because it was remote from the apse.  Later, with the spread of Christianity, the doorway was shaped to resemble an apsis, emphasized by two supporting columns, a decorative gable and a crucifix; the Romanesque doorway was composed of a Pseudo-Roman arch decorated with scenes of Judgement Day. Renaissance architects created doorways symbolically attached to the building; Baroque architects adorned their doorways with bombastic decorations, and the Rococo added hallways and lobbies. Modern architecture relocated the doorway to the side in order to break the code of symmetry. Post-Modern architecture restored the lost dignity of the doorway, with an entrance area attached to the building, in accordance with the principle of 'Form- does-not-Follow-Function'.

The significance of this communicative architectural detail can best be interpreted through three mechanisms of language: semantics (direct meaning), semiotics (accumulated connotations), and syntax (ordering value).

Semantically, the doorway is an opening through which one enters a building. This opening is defined as reference point in the building independent of its physical definition or its architectural significance. Thus, a doorway can be 'inviting', 'threatening', 'mysterious', or 'hidden', while the exit is merely 'an opening through which you leave a building'. In this context, it is logical to ask why the entrance to As house is completely different from that to Bs house.

In the broader sense, semiotics is the language of signs. Yet some social theories make significant use of it to decipher the meaning of social forces, far beyond the narrow use of spoken language. Structural anthropologists of the 1960s used semiotics to understand the ways societies express their cultural content in a given space. According to the theory of symbolic interaction, the meaning of a sign is only fully comprehended within the cultural context in which it was created. According to this logic, a fine example of the cultural significance of the entrance can be found in the supermarket, where the exit and entrance are functional points lacking identity. Yet according to the laws of capitalism, one may exit only from the point immediately adjacent to the cashier. Similarly, the entrance to an hotel is completely different from that of an opera house, and the entrance to a mall differs widely from the entrance to a court of law. The by-products of these accumulated cultural values are, for example, the foyer of a theatre, the lobby of an hotel, or the presence of a 'bouncer' at the nightclub door. Without the cultural implications of each of these functions, the building would be granted a completely different interpretation.

While both semantics and semiotics are based on abstract cultural values, syntax refers to concrete values. In relation to architecture, a discipline that 'makes order in space', the most relevant reference to language components occurs on the level of syntax. As immaterial as it may seem, the general value of a sentence cannot be deduced from an understanding of the words it comprises. Thus, the meaning of 'dog bites man' is almost the opposite of the meaning of the sentence 'man bites dog', although both statements contain the same words with the same meaning. The difference lies in the order. Based on this principle, it may be said that the value of a building cannot be determined solely from the sum of its spaces. What determines the value of a building is the way the spaces are ordered.

From here, it is a short step to understanding the syntactical interpretation of the doorway as an organizational factor in the building. The doorway is the 'bouncer' of the building, functioning as connector or divider of spatial categories. It is the doorway that determines the relation between the building and its surroundings, and at the same time determines the hierarchy of the rooms of the house. The farther away a room is from the outside, the less accessible it is, and therefore its value, in relation to the other rooms, rises.

In architecture, as in other means of communication, spatial value is translated into social value. Take, for example, the churchs apsis, the synagogues devir, where the holy scrolls are housed, the war room at the Pentagon, and the bedroom in most homes, which are all located farthest away from the entrance. When the relationship between a building and its surroundings is at stake, the doorway separates two social categories - 'familiar' and 'stranger'.

The doorway therefore is an important means of organizing relationships between the private and the public, on any level: a room within a building, a building on a street, a street within a neighborhood; a city within a country, and so on.

In many cultures the doorway is a means of expressing ones uniqueness in relation to ones surroundings. Islamic architecture dictates that the entrance must be through a front courtyard, which filters visitors. In Europe, the same social filtering takes place via the small hallway adjacent to the doorway. Taking Ram Karmis buildings as examples, (Rosemarine in Herzliya or the Supreme Courthouse in Jerusalem) the entrance is an orchestrated procedure - a transition zone between the public outside and the inner private inside.

Studies such as Rappoports, carried out in London during the 1980s, note that the only resource available to the individual for expressing his identity in long anonymous block buildings is the doorway, which he can personalize with ornaments or color. In contrast, the social code of the Druze villages in the Galilee dictates that doors must be wide open to welcome visitors, even on cold winter days. And in the kibbutz, social change is expressed through the transformation of the former deliberately neglected doorway and its lines of workboots, in favor of a well-tended, individualized entrance.

Most of Israels population is housed in apartment buildings where the communal entrance, 'belonging to everyone,' is often neglected and unwelcoming. The situation is compounded by the fact that in cities such as Tel Aviv, apartment buildings often house offices, protected tenants, young couples and low-income students, who lack the funds or interest to invest in the buildings common areas. In apartment blocks constructed during the 1950s, the entrance was often hidden, for economic reasons, leaving the yard and hedges as the only resource for differentiating one entrance from another.

In the suburbs, the situation is better. There, since building is more eclectic, there is a variety of cross-cultural styles and tastes offering a wider range of doorways. Some reveal elements of a cultural crisis; others express the homeowners’ aspirations to improve the appearance of the building and the street as a whole, for better or for worse.