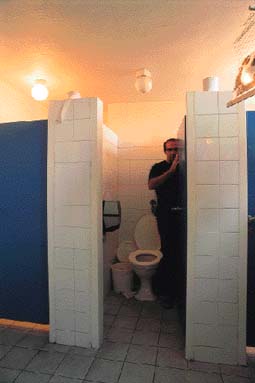 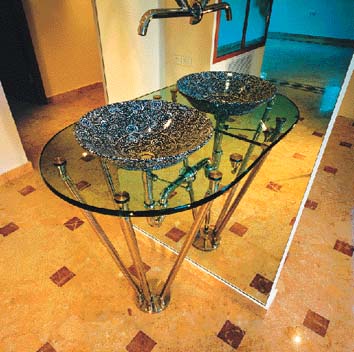 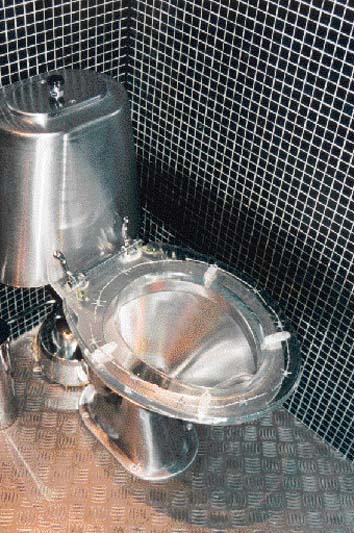 Although human functions often described in poetry, music, and dance, our excretory processes are considered ‘personal’ and are often regarded with disdain. A few examples sufficiently demonstrate how embarrassing the subject can be. For instance: men urinate together and women dont, yet women always go to the bathroom 'together'.  The doors of toilet stalls must never reach the floor, so your dropped pants are always in sight. Dividers must be of Formica-coated plywood, so that not an inch of redundant wall will go to waste. It is still legal to install reeking floor urinals where no one know swhere to urinate. The mirror above the sink must project to the outside those busy urinating on the inside. And there are those still interested in crouching in a cross-legged position in the hole-in-the-ground method used in the East.            Since the dawn of time, progress has been measured according to a peoples capacity to provide sanitation facilities and suitable treatment of organic by-products. The more sanitary a culture, the more it is considered civilized, and vice versa. Strange, then, that the greatest design disasters occur in public toilets.

Eastern countries have always embraced cultural rules of excretion much more than in the west. The bidet has  long been a feature of daily hygiene in the Orient, yet to Europeans - who will use cheap and pungent air fresheners but refrain from washing their backsides - it is mistakenly seen as a symbol for backwardness. To provide running water and a drainage system, Easterners placed their toilets outside the house (the word toilet in Arabic means 'the house outside'), while Europeans, satisfied with toilet paper or yesterday’s newspaper, would place their toilets in the attic of the house, for ease of ventilation.

The traditional separation of toilet facilities into Ladies and Gentlemen began in a Paris restaurant in 1739. Around the same time, the first public urinal - for men - was constructed, compelling women to learn how to 'hold it in'. The first public toilet was in fact built to cater to those who did not have one at home.

Although the WC (water closet) - a public toilet equipped with a water tank - was developed as early as 1596 by John Harrington, it was only in the 18th century that the method became widely adopted. Until then, the earth closet, requiring the preparation in advance of buckets of soil, was most common. It was only after the establishment of an underground sewer system in the 18th century that the toilet began to gain the respect it deserved. In 1738, Brondel invented the first variation of the modern toilet bowl, which was then further developed in 1775 by a British clockmaker named Alexander Cumming, and later by inventors Joseph Preiser and Joseph Bramah. This modern toilet bowl was made of solid steel with a press handle. The industrial porcelain toilet, easier to clean, was first introduced in 1850, and in 1870 Helior developed the elevated water tank. In 1915, the tank was first placed in its current position behind the toilet bowl. Since then, innovations have been limited to the style, seat materials, flexible plastic piping, and in water conservation.

If consideration of the past and present of the toilet fails to confirm the cultural superiority of the East over the West, the history of the bath will do so. Although bathrooms were in use in India as early as the 16th century, they became common in Europe as late as 19th century, and then only for the rich. Until as late as the nineteen sixties, half the population of advanced countries such as Germany, France and Holland, bathed only in public bath houses, usually once a week. In between, critical areas could be washed over the sink.

In 1995 an international symposium in Hong Kong discussed the subject of public toilets, following the recent awakening of awareness of ecological issues. Dr. Bindeswar Pathak, speaking of his native India, made an interesting point: 'How can the country ignore the subject of public toilets when the average daily amount of human wastes is 900 million liters of urine and 135 thousand tons of solid excretion? How can we explain the fact that 600 million out of a total 900 million are still relieving themselves in the public realm? Sewage systems are available to only 30% of the urban population, and to only 3% of the rural population, who must, from lack of choice, rely on nature as their sewage disposal system.'

Ironically, New Delhi boasts a museum of the history of toilets. According to articles collected by its curator, Dr. Fritz Lischka of Austria, in contrast to common opinion accrediting the Romans as the pioneers of the sit-down toilet, it was the western Indian Harappa civilization that first used porcelain toilet bowls connected to a central sewage system, in the third century BC. But with the fall of the Harappa civilization, its skills in sanitation were lost, and as a result, most Indians still use the kneeling toilet, either for reasons of hygiene or maybe because the Oriental position gives the best results. As for relations between form and function, archeological findings in Thailand and Sri Lanka reveal that urine was commonly separated from solid wastes and left to flow through open sewers. The efficient Romans, however, had keyhole-shaped toilet bowls, which nobles often employed right at the dinner table, the jug’s unique shape offering ease of use in either a sitting or standing position. In the preserved remains of Pompeii, toilets were found almost identical to todays model.

If the Romans could do it in 79 BC, why are we still installing open urinals? Why is there no public toilet culture in Israel? Obligatory installations in schools, government institutions and restaurants demonstrate only minimal conditions, and the Building and Planning Act is usually to blame. By mandating only the barest standards, the easy solution becomes the planner’s manual, taken as biblical truth when it comes to the relation between the height of a stair and its tread, access for the handicapped, the slope of a roof, and the minimal measurements of toilet stalls. Someone has determined the area of a stall must be no less than one square meter. If we take into account that the length of the toilet and water tank behind it is at least 65 centimeters, and the radius of the door (which according to the same law must open inwards) is at least 60 centimeters, the user’s only chance of exiting the stall without wiping the toilet seat with his pants, is to climb on the toilet before opening the door.

Much folklore has developed around the subject of toilets. Victorian musical halls often focused on bedpans emptied through the window on the heads of passers-by. Little has changed today. Public toilets, if they exist at all, offer no privacy at all and the public is reduced to decorating the walls with rude and vulgar jokes, usually not very funny. Maybe it is the only way to protest the planners’ demeaning attitude in designing public toilets that fail to block sounds and odors, making our most private moments an embarrassing encounter.