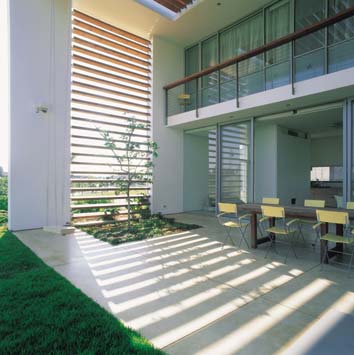 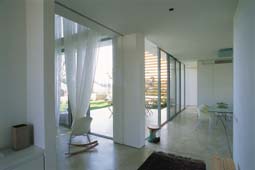 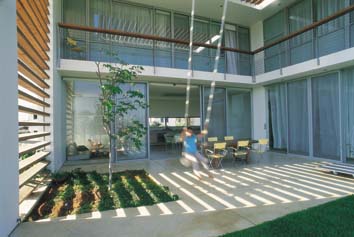 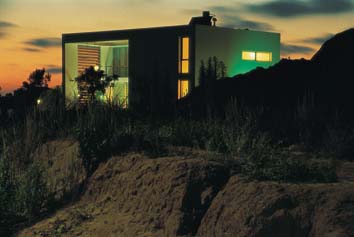 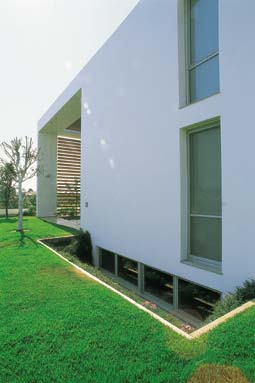 Three years ago, the Mayslits-Kassif architectural office won a competition to design the Remez-Arlozorov site in Tel Aviv. Still in its initial planning stage, the somewhat restrained proposal stood out among competing bids, each of which endeavored to invigorate one of the city’s most boring landscapes. Restraint,  meanwhile,  has become a trademark for the relatively young firm which is spending most of its time in the urban sphere. Recently, they won a design contract for the revitalization of Ashdod’s Rogozin street and landing a project for Tel Aviv’s Levinsky area. Prior to that, Mayslits-Kassif’s most prominent projects include designing three Anik fashion chainstores in New York and Tel Aviv, showrooms for Tollman’s, Bulthaup and Exclusive, and a number of private homes. Both  Ganit  and Udi got their start at Jerusalem’s Bezalel Art Academy and completed their architecture diplomas in London. Both serve as tutors for graduating students’ final projects at the Technion Faculty of  Architecture .

The rather restrained approach - particularly noticeable in the private homes you have designed - requires a significant degree of abstract complexity. What are you actually looking for, minimum form or maximum significance?

Ganit: For me, there is nothing more boring than works which demand a specific reading through the use of symbols or inherent meanings. We are trying to create situations which suspend automatic readings and enhance multiple interpretations. When symbols and metaphors penetrate architecture, the result may rise to a climax of superficiality. The simplicity we are fascinated with is one that stretches situations to the limit. It’s a simplicity that envelops a complexity that is revealed step by step, causing the observer to become involved.

Udi: The choice of the minimal is made out of a desire to see less. Through a process of elimination, we reach an abstract set of shades and shadows, a mere set of clues rather than familiar objects and situations. By offering a hinted reality and not an obvious and familiar one, our work is open to interpretation and is responsive to time and place, like the contrast between watching TV and gazing at the projected on the curtain silhouette of a tree moving in the wind.

That reminds me of the 1960s emergence of minimalist American music as a reaction to modern complex music. The principle was the sophisticated repetition of select passages with a gradual build-up of rhythmic complexity. To what extent is your almost obsessive devotion to basic forms a reaction to the prickly complexities of the environment?

Ganit: It may well be that our formal direction is a reaction to the visual pain familiar to all of us who grew up within the Israeli culture of architecture and design. Yet, we regret that an architectural approach that manifests simplicity, avoiding formal gestures, is considered radical in the local context.

Udi: Speaking of music, it’s interesting that Trance music, which deals with texture and sonic surfaces rather than meaning and built-in messages, does not direct the listener; it exposes you to a new and unfamiliar landscape. In a way, we are trying to achieve the same effect.

How then does your architecture relate to the environment?

Ganit: We believe that architecture plays a crucial role in the creation of inspiring environments with both physical and cultural dimensions. In the urban projects we’re involved in, we find the potential to influence culture in its making – street culture, culture of leisure, consumption, living, etc. – the most challenging.

An important principle of modern architecture is to express life within the context of creation, primarily through building parts. Where does detail fit into your architecture?

Ganit: When a space strives to be as simple as possible, and the gestures are generous, clean and devoid of inherent meanings, the role of materiality and detail in the building of space is enhanced. The design focuses on precision - a meeting point of materials and the way they affect space. In this respect, the climatic aspect is a vital component in our palette, if only because it is one of the greatest things we have here. The path of the sun and its angles are vital factors in the planing process - functionally, visually and spatially.

Udi: Reality is constructed from details, not only in architecture. What is common to better works, is that you can’t feel the details - specially not at first glance. They do not dominate space, just the opposite. Details are not meant to glorify the virtuosity of the builder or the architect, but to remove the creators from the consciousness of the viewer.

To what extent have you succeed in fulfilling through your ‘restrained’ architecture the fantasies of clients who don’t always think the way you do?

Udi: We feel we have something that may be of interest for our clients, but not necessarily to everyone. Obviously there must be common ground for the making of a successful project. Our clients are aware of our mode of thinking and are usually willing to expose themselves to it, and even to develop and change with us.

Ganit: When it comes to private homes, we’ve never been tempted to promise red roofs or Tuscan look-alikes, and in fact, we have opted against taking a number of projects for that reason. When it comes to public projects, however, there is no conflict since they are less personal and discussions are usually pragmatic.

How do you two get along as a team?

Ganit: Our work is the result of cooperation between two people with both similar and conflicting tendencies. It’s not always easy to reach agreement, but in the end the results are usually worth it. What unites us is the need to probe, to re-think from square one the original concept - and to avoid being bored. We each contribute different qualities, and together we move forward.