Architecture at The Horizon - Interview With Architect GERT WINGÅRDH 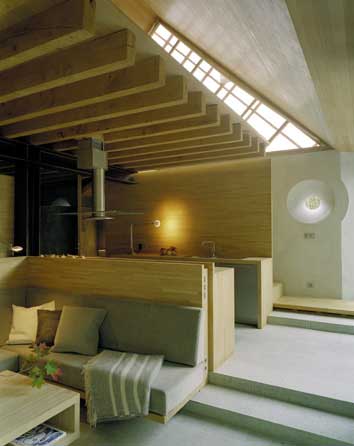 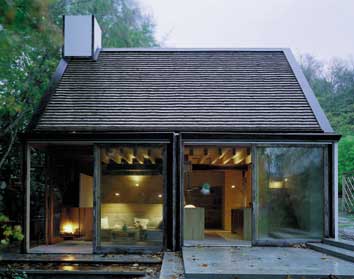 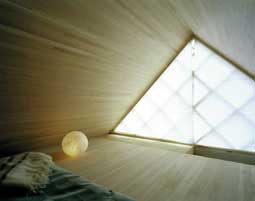 Two years after gaining his Master of Architecture degree at Chalmers University of Technology in Göteborg, Gert Wingärdh opened his office. Concentrating at first on interior design, he changed direction in 1988 when he won the Kasper Salin prize for the Öijared Golf Club House - his first building.  His career took off during the recession of the early 90s, with a major commission to design the AstraZeneca Research and Development buildings at Mölndal, for which he was again awarded the Kasper Salin prize in 1993. Wingärdh became internationally known following the exhibition of this  building at the 1996 Venice Biennale, and his achievements in designing the Swedish Embassy in Berlin, where he expressed original creativity, architectural ability, and a sense of humor which is quite rare among Swedish architects.

Architect Lilach Paz interviewed Wingärdh at his office in Stockholm.    Before looking at your architecture within the Swedish context, I would ask you to define the dominant traits of the Nordic architect.

I dont believe Nordic architects have a distinct form of self-expression. The one common thread in their design approach is a strong orientation towards climate, focusing on light. Days are very short in winter, and the sun sits low on the horizon creating a warm, redditsh light. In the summer, it’s the opposite - very long days with drawn-out dawns and dusks of yellow and red hues, glow intensely. Thus all design is influenced by how light penetrates a building and how it is routed and filtered into the building. Daylight is an obsession of the Nordic people.

What do you have in common with Swedish architects in general?

I think Swedes focus on the social side. This is reflected by the fact that our design emphasizes the plan, never the facade. Attention is focused on how people move within space - how one operates within a structure. We try to create natural meeting points, to encourage chance meetings by putting coffee break areas close to copy centers which in turn are adjacent to circulation nodes.

Sweden is a lightly populated country compared to the rest of Europe and perhaps the emphasis on facilitating human contact comes from our lack of experience in social interaction. In contrast, middle European architecture can afford to invest less effort in creating artificial interaction points, placing more importance on the building’s structure and external appearance. Two years ago we designed a project in Bologna, Italy, and when we raised the issue of meeting points with our Italian clients, they could not understand what we were talking about. As Italians, they know how to interact, they dont need any help from a building. Basta!

When we designed the Ericsson facility in Lund, Sweden, we had a great plan, with a perfect ordering scheme of social interaction. It was extremely difficult to design facades to that scheme. I am still not certain about our results.

Sweden is renowned for its outstanding design in wooden furniture. What characterizes Swedish architecture when it comes to materials?

A certain poverty and an emphasize on humble materials. An honesty of expression which often is at odds with modern construction techniques. Facades are mostly veneered in stone, brick, concrete, metal or wood. The cold climate does not allowed the inside, i.e. structure, to penetrate the thermal layer. Therefore the design of the interior is separated from the exterior, which usually responds strongly to the site, to the context. In Stockholm a lot of the buildings are rendered, with all the yellows, ochres and reds of iron-colored limestone giving a certain unity of expression. This tradition is followed even in brand new structures, in sharp contrast to the approach taken in Asian cities where anything goes and a sort of beauty of the collage is achieved.

In my own work, this Swedish attitude was visible in the Swedish Embassy in Berlin where we proposed a rich Norwegian marble facing towards the Norwegian Embassy, and a white granite towards the Finnish Embassy. Two diverse facades acting each in its own context of a square and interacting with its neighbor. In the end, the facades were executed in Swedish stone, black granite and white limestone, due to political pressure.

The third facade facing the street was layered behind the great veil designed by Berger and Parkinen. This facade was interior but visible through the glass veil that simply acted as a thermal skin and was not actually seen. It was most elaborate, entirely done in yellowish stained birch (echoing the colors of the sun, low in the sky), and of course an apt symbol, as suggested in your question. Complex forms were often done in painted birch as a substitute for expensive marble during Sweden’s heydays in the 17th century.

When comparing the structures cold facades with the coffee table you designed at the center of the Embassys entrance hall, it appears you were trying to make an analogy with the Swedish character: cold and calm people on the outside, but warm and soft on the inside, once you get to know them.

An interesting analysis. We did a proposal for the Swedish pavilion at the Expo 2000 in Hannover which played on that theme. It was a totally closed box, without windows, covered in cool blue stone, with slits carved with sharp edges like knives. Very forbidding. The box came apart like drawers and opened to a very soft interior of whitewashed wood with a glazed opaque ceiling that covered the inside with a soft light: the cool exterior and warm interior that characterizes the Swedes. Unfotunately, it wasn’t  accepted.

Much of your work is done outside Sweden. Are you proud of being known as a ‘Swedish architect’, or do you prefer to be known as an ‘international architect’?

It’s hard to say. I think all architects are subject to international influences and are much informed by current trends rather than by specific national issues. In Sweden, we are considered ‘international’, though when we work abroad everybody thinks it is very Nordic. I would prefer to call myself an international architect.

This may expand  the possibillities, yet you remain Swedish in your way of thinking. Who actually influenced your architectural outlook?

The truth is that I originally had no intention of becoming an architect. I wanted a career in the arts. I didn’t believe that I had enough talent to be an artist but perhaps I could be an art dealer, so I studied economics and art history. Then I realized that architecture could be seen as art and I was very taken by experiencing the complexities of the late baroque as performed by Borromini.

When I started studying architecture, Sweden was at the time very influenced by Neue Sachlichkeit - a very dry functional approach. My generation found great inspiration in the writing of Robert Venturi and the architecture of Louis Kahn. Later, the detailing of Carlo Scarpa was a revelation. When I started working, my mentors always used to refer to Alvar Aalto, while I myself was very keen on the freedom of expression as shown in the works of Ralph Erskine. Today I am very impressed by the strong conceptual thinking of Jean Nouvel and the basic simplicity of many Swiss architects. Actually, the latter are quite close to Sachlichkeit.

Your projects are very diverse. It’s difficult to identify a unifying theme. Sometimes one gets the feeling that each project has been designed by a different architect.

Your point is valid. I think each building is a unique response to a site and a programme. I like a fresh start. To quote Kahn  'I love beginnings.' What is a villa, what is a laboratory? I don’t think I have found THE answer.

According to this view, it would be difficult to distinguish the artist behind the creation. At any rate, from where does this difference stem? From the client’s influence or from a desire to remain fashionable? Or, is it that you grow from project to project?

My strong impulse to explores leads me in different directions. The core of our commissions has been for Swedish industry, where the emphasis is on the interior and on a rapid design and construction process - 'value for money.' With public commissions like the Embassy, the Arlanda Tower and the Universeum, there has been a new interest in the exterior. Personally, I gained a lot from judging a Finnish competition with Peter Zumthor. We argued intensely as to the pros and cons of various entries. The experience led me to explore structure in a way I previously did not think was right.

Ten years ago, you published an article in the Dagens Industri in which you said that 'ecology is the future', and that from then on your office would focus on environmentally-sound building. Where do ecological aspects fit into your projects today?

The 1973 energy crisis occurred while I was studying architecture. Between 1977 and 1986 I was dedicated to interior design projects. The first building that we designed was the Öjared Golf club, completed in 1988. It integrated many environmental concepts, like  shielding the building on its north side, opening towards the south, shading and ventilation. All this made the building energy-efficient, which  is also expressed in its form and relation to the context.

Later, the entrepreneur Skanska wanted to go ‘green’ and sponsored the environmental education of the office. We realized that, despite the fact the energy crisis has passed, very little had happened since the 70s and that much of  the debate around the subject was based on emotions. Through our commissions for the Swedish industry, we came into close contact with skilled technical consultants who could actually design buildings that were energy-effiecient and sustainable. The Ale secondary school and cultural center, completed in 1995, were designed on this knowlege and technology. Sweden’s cold climate means there is little need for air conditioning. In June this year the Universeum Science Center in Göteborg was inaugurated as a didactic project where the building actively imbues the student with ecological awareness. It is designed to generate as much energy as it consumes.

How does the ecological perspective fit into your projects in Stockholm and Malmö - two architecturally-conservative cities - in which you offer solutions through the building of the Sergel Tower in Stockholm and the Scandinavian Tower, which at the time was to be Europe’s highest tower?

I believe there is a global drift toward the cities which has to be addressed in an ecological acceptable way. Within that context, there is a need to provide more housing and more workplaces in urban centers and at transportation nodes. The Sergel Tower does precisely this, bringing housing to the very heart of the city, which is easily accessible by mass transportation.

The Scandinavian Tower is at the first railroad station on the Swedish side of the railway linking it to Kastrup Airport which is one of the largest in Scandinavia. Thus it fits the bill. It is a mixed-use building providing a variety of facilities where the key is a careful energy balance.

How do you envisage the future development of the architecture in Sweden?

I believe that Sweden will need to change in a number of ways. We have to do away with the city of the 19th century. We dont have to demolish the existing structure, but we do need to add new structures of greater height and density. We  have to prove that new buildings make for a better environment. The city was the great wonder of the 20th century. Considering that 400 million people were city-dwellers at the turn of the 19th century - and at the end of the 20th century, 3,000 million! Change is occurring and people enjoy people. It is a challenge to concentrate people in sustainable cities with a minimum energy use. A great challenge!