Roofs- Vistas From Above On The Fifth Elevation 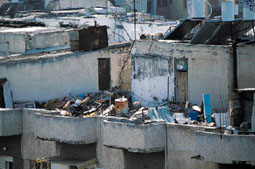 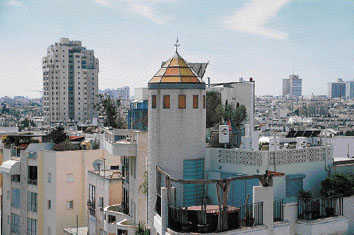 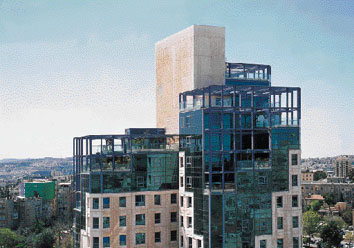 Visitors to Israel receive an early warning of the country’s visual diversity when their aircraft prepares for descent at Ben Gurion airport. The first sighting of Tel Aviv is a chain of hotel tower blocks guarding the shoreline, and then the rooftops of the city are revealed, exposing all that is best hidden from passing eyes. Heaps of depressing junk, improvised shading devices, and innovative patching of leaky ceilings, a veritable yard sale not intended for public display. Here and there one may spot a World War Two-vintage bicycle, abandoned plastic inflatable pools from long-forgotten Independence Day celebrations, and old furniture that just might “come in handy” but is always in the way.

“Tel Aviv has a thousand faces”, goes the saying, 'and no one knows which is true”. But the city’s rooftops really are the country’s gateway, and this time, no one can blame the architects. A tour of the roofs of the new skyscrapers is ample evidence of serious attention to the fifth elevation. Tel Aviv’s sorry skyward appearance is the fault of the dwellers of the city’s apartment blocks. And the municipal department for “improvement of the citys appearance”, reluctant to lift its head above the green garbage bins that litter the city streets, is equally guilty.

Elsewhere in the world, the dilemma of the fifth elevation is given due attention. The Australian city of Adelaide, founded in 1837, is known for its flourishing gardens. A year ago, Dr. Jean Gary of the Faculty of Geography of Adelaide University, led the drive for cleaning up the city’s rooftops, with support and encouragement from officials. Enthusiasm rapidly spread beyond the borders of the university, and the Adelaide initiative became a model for other cities.

In Russia, a drive to encourage citizens to groom their roof gardens was launched mainly as a means of broadening the limited range of vegetables available in the market. In Toronto, Canada, an experimental project led to vegetable gardens on the roofs of buildings in the old port. Here the initiative came from a commercial company’s public relations gimmick. Its success not only enriched the choice of vegetables available in the city, but also greatly increased awareness among residents of the citys appearance.

Manhattan, in contrast, is already blessed with penthouse gardens that fulfill the fantasies of the city’s wealthiest residents. These  “secret gardens” are not without problems, often placing a strain on the buildings skeleton, and accumulating moisture caused by continuous watering. Appropriate construction, use of soil alternatives, light-weight containers, and proper drainage systems, are ready remedies. These gardens may be intended only for the private use of a small elite, but they contribute significantly to the face of the city, whether viewed from the air or from high-up windows.

Here in Israel, we suffer a great shortage of water, enjoy a wide variety of vegetables, and often neglect our plants and gardens. The main focus is on the real estate value of the assets, although it is strange that the city leaders, having now decided to permit roof-top construction, are not smart enough to capitalize on it. Those who want and can afford their own private place in the Tel Aviv skies should at least be compelled to clean-up, renovate and refurbish the public areas of their building’s Fifth Elevation. For the sake of those who live here, as well as for the airborne visitor.