Until The Wind Changes 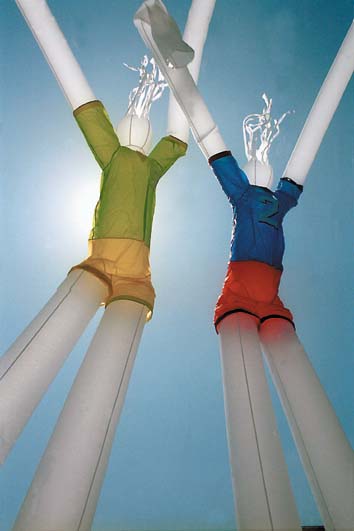 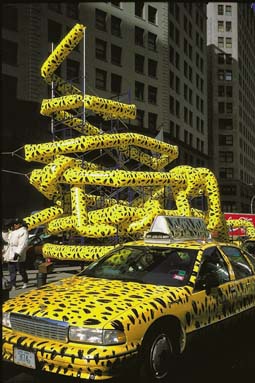 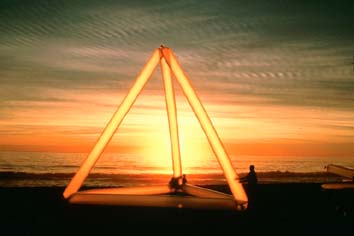 UNTIL THE WIND CHANGES

Architecture by its very nature demonstrates man’s aspiration for stability and long life. A one-time event is its most dynamic expression. Israeli designer Doron Gazit has developed parallel concepts - “airchitecture” and “airtist” - in which he uses inflatable sleeves as a medium for creating air sculptures. The story goes that as a student at the Bezalel Faculty of Industrial Design in Jerusalem, Gazit made a living selling balloons. The amusing figures he created for the children of Jerusalem led him to produce the “living sculptures” which he presented to Bedouin nomads during a visit to the Sinai Desert. Their thrill at seeing his moving creations made him realize the magic lies in the air and not in the balloons. Today, he has a burgeoning business in Los Angeles and his sculptures appear all over the world.

Gazit’s inflatable balloons have crowned him king of a new art form which   complements architecture. His work has been compared to that of the environmental artists, Christo, famous for his wrapping of large structures in fabric. Gazit uses the building, the site, or the event as his canvas. As demonstrated in his 'airbow' hovering above the Judean desert or U.S. flag afloat the Mediterranean Sea, Gazit differs from Christo in that his sculptures become active components in the event, not just still-life representations.

His works are scattered throughout buildings, bridges, skeletal constructions, fences, stages and columns, in an eternal variation of expressions, drawing the viewers attention.

The final configuration is not pre- planned, but dependent on the circumstances; his work is an investigation of chance. When working on one of his earlier projects, Gazit noticed a plastic bag “determined” to demonstrate its own “signs of life' through the wind. He now utilizes the unpredictable power of the wind, creating interaction with the programmed powers of the air compressor. When there is no wind, every motion occurring near the balloon influences its shape. An abstract role sculpture floating in the potassium pool of the Dead Sea, and a pyramid glowing at twilight on the shores of Santa Monica, are only two examples of the type of dialog Gazit conducts with the environment.

Manufactured from strong, washable material, the air-tubes are easily used, adapted and reused to create tunnels, weave skeletal constructions, wrap buildings - their only limits are the limits of the creator’s imagination. Gazit’s works, including 'Ventitubes' at the 1994 World Cup tournament in California, and 'Fly Guys' at the closing ceremony of the 1996 Olympics, play an integral role at numerous global events. His 'Sky Ticklers', 'Airflames', and 'Airobic Dancers' are seen at mega-events all over the world. Today Gazit is focusing on creating flying characters, architecture with airtubes and nature sculptures. His current projects include glacier-wrapping in Iceland and “cloud-seeding” with balloons released from airplanes.

When it comes to “airchitecture”, the sky is not the limit.