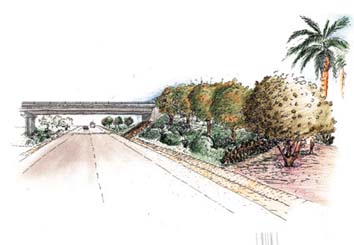 Despite several appeals to the High Court of Justice, strong objections and intense public debate which have accompanied the planning of the Cross-Israel Highway, construction has begun. Phase one - a ninety kilometer section from Nahal Soreq to Kibbutz Barkai at Nahal Iron - of the first Israeli toll road is taking shape. Beyond the debate as to whether the highway is the best possible solution to Israels transportation dilemmas, this massive construction will have significant impact on Israels landscape. The scale of the enterprise - and the controversy surrounding its planning and execution - make it an international project of the first degree. Therefore it is disappointing that no architectural competition whatsoever has been conducted for the design of its thirteen interchanges, a double-tunnel of 430 meters length, and a startling 128 bridges.

Because the Cross-Israel Highway is a project on a national scale, it has its own planning framework, to be approved and monitored by a special inter-ministerial team appointed by the National Planning & Construction Committee. Moreover, the highway has enormous potential impact on the environment. It will traverse every one of Central Regions east to west roads, exposing on its way sheltered agricultural areas. Thus the official decision of the planning team to reduce the scenic impact of the road as much as possible is a just starting point. At the end of the day, this “humbling” policy may present a satisfactory architectural statement or will perhaps be seen as a retreat, in reaction to the ongoing - and mainly hostile - public debate.

In 1995 architect Shamai Assif of the Lahav Team responsible to the Cross-Israel Highway construction consortium “Derech Eretz” defined the starting points for the roads landscape and architectural design as “...exposure of the existing landscape and integration of the roads alignment, while reducing the possible landscape damage”.

He discusses in detail the roads alignment and position, the engineering design of the bridges and ways in which the vegetation should be treated. Taking into account the local landscape and climate, he called for vegetation to be planned in line with water conservation and easy recovery after forest fires.

In an attempt to reduce implementation costs, Tamar Darel-Phosfeld - Manager of Landscape Development and Rehabilitation for the consortium - suggested the vegetation be “Israeli” and suited to the agricultural crops along the route. This is a refreshing concept after the monotonous landscape development all over the country of lawns, palm trees and huge rock formations which often have little in common with their surroundings. In her opinion, “Despite the huge investments in highway and interchange development in the past few years, there is no ecological integration betwen the highway and its architectural components in the landscape ...it is possible to find a variety of solutions relating to a single landscape element, with no overall regard for the highways landscape”.

With the construction consortium assuming responsibility for both the road and its landscaping, there is a real danger of missing the rare opportunity to create landscape landmarks that will enrich both the roadside view and landscape architecture profession. Because the main consideration in selection of the constructor of the road was based on a deal that put little financial burden on the State of Israel, there is little room to argue with design aspects. However, an eye on the bottom line does not necessarily lead to poor results; if done wisely, a tight budget can make for creative solutions.

In addition to the repetitive elements of tollbooths and roadsigns, an ecological sculptural formation will be placed along the highway. The work of Israeli artists, the sculpture will arouse, according to Darel-Phosfeld, much public interest.

Although the landscape design is based on a uniform concept, variation will be expressed through the professional interpretation of the four landscape architects appointed to design an assigned section of the highway. Each was charged with relating to the surrounding view and particularly to the agricultural vegetation the highway interrupts.

Landscape architect Shlomo Aronson, responsible for the landscape attitude towards roads over the last decade, is enraged by the highways misleading name. In his opinion, it connects, rather than “crosses” Israel. “The country is so full of architectural statements and national symbolism, we must aspire to calming elements”. Responsible for the stretch of highway which includes Ben-Shemen Interchange, he has already applied - successfully in his opinion - his plan to conceal the interchange within its distribution in the landscape, while accentuating its unique features with stone walls.

At Qesem Interchange an entirely different approach was taken where the concrete bridges “hover” over the flattened landscape, creating an independent presence as an environmental sculpture in the view. Bruce Levin, appointed responsible for the section which includes Qesem Interchange, is opposed to the ornate landscape design and uses the mandate he was granted to create a more unique view. He combines elements of a less green nature, such as open earth, acoustic barriers with planted trees (eucalyptus and sycamore), concrete walls with netting for climbing vines), and wild shrubbery.

The view section between Ben -Shemen and Elad was planned by the Braudo-Maoz office. Isolated within the pastoral scenary of orchards, groves and olive plantations, a tunnel is being dug beneath the archeological site at Tel Hadid. The portals at both ends of the 430 meter tunnel will be unusual reference points within the landscape. Natural stone will coat the openings and will also form the bridge above the Nivalt stream where river-bank vegetation will be integrated. Perhaps the most obvious architectural statement will be made by this office (in which Tamar Darel-Phosfeld was a partner). Part of the quarrying will be done in correspondence with the contour of the hills, and not to that of the highway as usual, in order to grant drivers a different scenic view.

Planning along the northern section, the Jaljulia section - Eyal Interchange, was given to the Greenstein-Hargil office. This section cuts through adjacent Arab villages and agricultural settlements, a patchwork of agricultural and orchard vegetation. Here, the planning message will be based on continual suiting of the highway view to the character of the adjoining fields and avenues of cypress trees which separate the fields and infiltrate the area of the highway. In a similar way the vegetation will be rehabilitated in the Tzir stream area, to emphasize the streams presence. Rehabilitation of the Eyal Junction view will adopt the character of an orchard, as an echo of the orchards which were once there.

Architect Micha Vertheim was appointed by the consortium to design the bridges which are to be an integral unit of the landscape. A compromise was reached on “constructional standardization” for economic reasons and within the pillory of standardization, Vertheim determined the architectural aspects unique to the bridges: reduction of massivity, accentuation of the horizontal lines and use of a transparent light steel railing, unique to this highway. As a result, the main characterization of the bridges will be their integration in the landscape.

To date, the planners pride is the differently characterized bridges at Qesem, Daniyyel and Nesharim Interchanges. However, the goal is to invest planning effort in approximately twenty bridges of the fifty which cross over it. These bridges will be granted a clear and independent presence, in accordance with written guidelines, as referred to above, by Shamai Assif.

The effort to integrate the bridges in the view includes the supporting walls: the lower walls are coated in natural stone, the ones higher up and more conspicuous in their presence, are candidates for synthetic stone coatings. Shamai Assif still supports the use of natural stone, fearing substitutes will demonstrate solutions detached from their context. The lesson learned, according to Assif, in the Maaz bridges is that, “efforts to improve the bridges architecture resulted in many cases in clumsy solutions, which should have been avoided”. However, it is important to point out that the consortiums offices, located at the heart of Nahshonim Interchange, was planned by architect Moshe Vered and received much special attention.The building represents an appropriate expression of its location and technological purpose.

The chief engineer of highway, Reuben Lev-On and the monitoring Lahav Team headed by engineer Gad Weinstein will be supported by advisors from all relevant fields of engineering. Within this framework architect Shamai Assif is in charge of the landscape architecture, and agronomist Danny Elimelech is responsible for vegetation. The work will be executed under the supervision of an accompanying team headed by Ronit Mazar, landscape architect Amit Segal serving as an advisor, and landscape architect Revital Shoshani who will oversee execution.

A good look at activities to date indicates that there is still a real danger that with so much landscape, you wont see the architecture. Many sections of the highway are still to be planned, so there is still hope that the parties involved will use their initiative and express some creativity.

Lets not forget the grave importance of competition as a catalyst for the improvement of architecture. Competitions also provide a real opportunity to identify new talents and original thinking. As so, this article is dedicated to the public of architects, very busy awarding consolation prizes and attending lectures from Very Important Guests from overseas. All of whom, by the way, gained international recognition and appreciation as a direct result of open architectural competitions.