The Semiotic Steel Of Haim Dotan 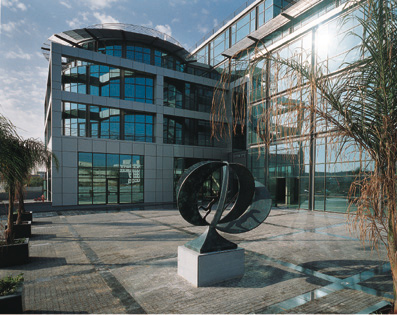 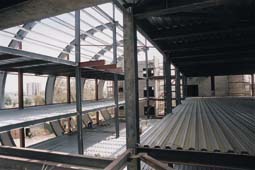 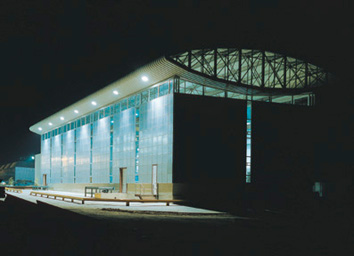 In 1975 architect Haim Dotan left for an overseas trip, from which he returned only sixteen years later. During his “trip” he completed his architecture studies at the University of Southern California, worked in an architectural firm in Santa Monica, completed his M.A. and gained “Japanese” experience in the office of architect Kisho Kurokowa. While still overseas, he and architect Shimon Filzer won the 1990 competition for the planning of the Technion Faculty of Architecture.

His victory in the competition earned him his “diploma” in the ways of Israeli architecture. The demeaning treatment he and his associates received, particularly from the competition’s initiators, led to a legal battle. It ended with the mandatory imposition on the young architects’ team of an older, more experienced architect, charged with reducing the Faculty as planned.

The building itself brought no new architectural tidings, despite the remarkable love of the profession expressed by the romantic treatment of the building’s technology. Neither did it bring Dotan and his associates much work. From an office he established in Jaffa, Dotan continued his work, developing his own signature architectural language. Based on semiotics, Dotan’s approach focuses on the building content and technology needed to realize it in a given space. In 1998 he was honored with a special award by the Architects’ Association.

The Achilles’ heel of architecture as an economic enterprise lies in a process whereby buildings are often planned but seldom realized. What remains to be judged is the “how”, and not necessarily the “what”. His high volume of work with industrial buildings led Dotan to be known, misleadingly as a “man of steel”. In fact many of his residential buildings express an almost naive aesthetic sensitivity, reflecting the delicate balance between man, place and technology.

Upon recently winning the Israel Contractors & Builders Union award for the planning of the Amargad building in Petah Tikva, Dotan commented, “The planning process is built on curiosity and the search for the hidden truth of each project. I learned from I.M. Pei that the technology of a building is not detached from its aesthetics...Tadau Ando’s work revealed to me the painfully touching meaning of minimalist truth. The Japanese ink brush enabled me to express with a simple line, complicated words and feelings”.

More than in any other kind of building, the design of industrial buildings should express a sophisticated integration of contemporary building materials and methods. Thus Dotan is bothered by the common use of curtain walls which, despite their modern look, create ventilation problems resulting from direct sunlight. Blocking of the direct sunrays with filters is only partially effective, and usually requires an additional controlled shading device. In the Iscor aluminum factory in Kiryat Gat, Dotan developed solid insulated aluminum walls. These walls not only grant visual expression to the factory’s final product, but also contribute to its dynamic rhythm fortified by the form of the roof.

Dotans criticism of current trends in Israeli architecture occasionally emerges in random discussions with fellow professionals, and often in his presentations to students. Like other architects who care, Dotan believes the main challenge before architects and city planners today is to halt urban degradation caused by desolate planning policies.

During a 1996 seminar, Dotan focused on one of the countrys more severe urban problems - the relegation of open spaces between built areas to the status of “temporary wasteland”, until its realization as profitable real estate. Dotan’s argument refers to any open space located within a built continuity. “Construction of thousands of residential, offices and industrial buildings at the center of an area, with no relation between them, fails to create urban continuity and does nothing to contribute to the fabric of streets, squares, parks and inner courtyards. The question is, does replication and anonymous repetition as a means to ensure continuity represent a worse option? The challenge is to create a local order of defined urban spaces - those which are understood by the man on the street”.

How is it possible to grant unique significance to a continuity of buildings planned under predicated conditions? The combination of low budget and poor improvisation skills, directly impinges on the architects ability to clearly express his ideas. “Often the architectural vision is too revolutionary, ahead of its time and place. Sometimes it seems that any constructed project still relating to the architect’s conceptual plan is a miracle. Each day is a new battle in an ongoing war of attrition. I have adopted Le Corbusier’s principle that not every building has to be an artistic breakthrough, but every building should express a searching process influenced by the conditions of the site, climate and culture”.

Many local architects are still busy with the question of “Mediterranean architecture”. As one who has studied and worked in California, Tokyo, Sidney, and New York, Dotan uses his background to realize his own identity within the Mediterranean context. “Although my mother was born in Shanghai, I am not Chinese. I am influenced by advanced technologies, but I keep in mind that I am building in Israel, on a different scale and using local technologies”.

His current project is the campus of the Negev Academic College of Engineering, in partnership with architect Gershon Shevach. There, the content - a technological college - contributes to its form, but not exclusively. “I don’t forget for a moment that the college is being constructed in a park within a established residential neighborhood. The park belongs to the people. Therefore the buildings are built as bridges stretching above it. We searched for a way to express the neighborhoods existence, but not in a detached manner. We instinctively avoided cold smooth Japanese concrete, choosing bare, sand-scorched concrete, which will blend with the desert landscape”.