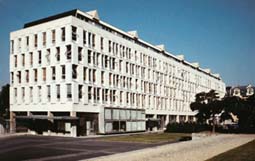 What does a magazine, aspiring to present architectural achievements, have to do with a building which is categorically not considered as such? and especially in Paris - a city overflowing with architectural treasures?

The answer lies in the fact, almost forgotten, that buildings involve content as well as form. The truth is that modest buildings often survive much longer than buildings designed with an emphasis on form. More than any other European city, Paris is rich with examples. Thanks to the inborn awareness of the need to preserve the existing, classic building facades are restored and conserved. However, such treasures may still fail to deliver the dramatic interior spaces most suited to contemporary content. Whereas form buildings are mostly pushed aside to the periphery, only few architects are granted the privilege of planting foreign bodies within the city’s texture. The most famous is the Pompidou Center, designed by Richard Rogers and Renzo Piano. Completed in 1977 and recently renovated, it is a landmark in the heart of Paris.

In contrast to the loud formal aspect of the Pompidou is the Cite building, designed between 1962-5 by two architects, Oliver Cacoub and Paul Tournon. The Cite building, seen in all the pictures of the nearby cathedral of Notre Dame, is prominent in its simple, almost boring lines. A closer look reveals a complex of three buildings, stretching over an area of three square kilometers of the Marais, one of the most prestigious quarters of Paris.

Tourists tend to overlook the building, but artists know it well. Many have had the opportunity to stay there while even more did not get a chance. And then there are those who abandoned it after a short stay. Artists do not necessarily make for ideal tenants, and the idea of housing a thousand artists under the same roof could very well lead to an explosion, and not necessarily a cultural one.

During its forty years, the Cite has housed a variety of tenants of all nationalities, languages, ages and tastes. Its guest list, while not necessarily representative of the history of art, certainly includes many familiar names. The common denominator among these artists is their courage and ability to leave their safe, everyday routine for six months or a year in Paris, while agreeing to live in very humble - even harsh - conditions.

Like other unique projects, the construction of the Cite began with the crazy notion of one man, architect Felix Brunau, an experienced planner of public buildings, such as the Pasteur Laboratories at Reinnes University, the Italian Consulate and the Overseas Office in Elysees, in which he acted as the House architect. During the Second World War he served as an officer, was wounded, fell captive, escaped, and then as a member of the underground resistance, was imprisoned by the Gestapo. After the war, he was appointed Chief Iinspector of Public Buildings during the massive public construction period. In this position he struggled to uphold a standard of uncompromising architecture.

When sent in 1947 to appraise the situation of France’s consulates in various countries, he realized that artists were unable to return to Paris, under post-war conditions. He suggested that the city council establish a center to function as a hostel for artists from all over the world. He was helped by his personal connections with Pierre De Gaulle, head of the Paris municipality and brother of Charles De Gaulle. A large area of the neglected and rundown Marais quarter was allocated for this purpose and a plan was drawn up to evacuate the meager buildings housing immigrants adjacent to abandoned palaces. Reconstruction plans were developed, but Andre Melroux, Minister of Culture during the 1960’s, prevented execution of the plan in favor of its historical rehabilitation. While he saw artists as a national asset and passed laws contributing to the improvement of their situation, he had reservations about the Cite project, mainly because he preferred to aid artists who resided in Paris on a permanent basis.

The decision to place the Cite in the center of the city grants artists access to the cultural treasures of Paris, and contributes to its success and long-lasting survival. However, with no broader plan and uncompromising management, its success is not guaranteed. The idea is based on cooperation between many different countries, government and academic institutions who sponsor studios for artists selected by them.

Between the time of the generous offer and its execution, thirteen years passed, and hundreds of discussions preceded the plan’s approval, leading to inauguration of the first building in 1965. The implantation of a contemporary building among the most important buildings of Paris, the most modern of which hails from the 19th century, naturally led to many objections. Arguments about the height and shape of the building continued for years, until approval was finally granted for a five-storey building above underground auditoriums and rehearsal halls.

The floor plan is based on twenty studio apartments of 35 square meters, set along both sides of a hallway. The classic European definition that an artist’s studio have large windows enabling natural light filtration was adopted here as an important principle. Each apartment has an outer glazed wall; some face a quiet courtyard, and others, the noisy boulevard. Decisions made in the 1960’s regarding creative conditions puts the artists of our time to a strange test of modesty. The Cite’s bare neccessities in a low maintenance setting with no provision for improvisation, compel the artists to totally commit themselves to the creative process.

The success of the first building led to the creation of additional workspaces, namely printing and engraving workshops housed in an adjacent 19th century building. In the late 1980’s another five-storey building was built for dance and music workshops, planned by architects Nouvian and Bernard Michel. The Paris municipality then allocated an existing building to the Cite in the Montmarte area, which also housed French artists who had no workspace of their own. In 1995 a multi-purpose art gallery was added.

Tenancy agreements were made for a period of 100 years (of which only sixty remain), to be followed by a reassessment of the situation. Today the Cite includes 306 studio apartments most of which are designated for artists in the plastic and music fields. There are also workshops for sculpting, printing, engraving, ceramics, photography darkrooms, rehearsal and recital halls with a piano and organ. However, residents must pay a separate fee to use these facilities, as well as for Internet and laundry services.

Each studio features a workspace, a sleeping corner, green linoleum floors and heavy black curtains (enabling sleep during the day). The kitchen and bathroom are particularly minimalist in their design, with only a small niche for hanging clothes and a tiny storage area. The furniture includes a dining table, a work table, an easel, two armchairs, three chairs, basic bed, dresser, one shelf on the wall and a basic cutlery set for four people.

Despite the strict house rules, the changes each studio undergoes within a few days of residence are fascinating, originating as they do from creative tenants. Each must commit to the Cite regulations and the regularity of each and every object. The studio must be returned in its identical original state, any harm or damage must be paid for. On the other hand, anything that is acquired for housekeeping purposes during the period of residence must be left as a legacy to residents that follow, as long as it can be hidden during the transition period in the tiny storage area.

The Cite is not a hotel and thus does not supply services other than sheet changing and phone message services - in French only. Each room’s telephone links only to the operator and the workshops. The most precise definition of life in the Cite is supplied by Madame Simone Brunau, President of the Foundation and manager for the past thirty-seven years, “The Cite is a kind of convent in which artists reside under most modest and basic conditions, while waiving their regular living habits for the good of the artistic process”. Personal experience reveals that this “convent” located on the banks of the river in a good place for an artist in Paris, offering a multitude of benefits against any inconveniences its residents may suffer.

Madame Brunau (wife of Felix, who initiated the project) is the ultimate authority who calls the shots. She spends every day in the Cite and manages to meet each of the hundreds of artists residing there. Management hold periodical get-togethers for the artists, where the rapid formation of ethnic and national groups time and again demonstrates that a shared mother-tongue is more powerful than artistic solidarity. The only other socializing takes place in the two tiny elevators which are constantly filled with artists going up with baskets of food and down with bags of garbage, bags that overflow even in the creative process.