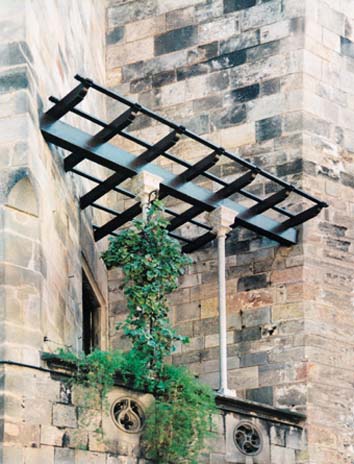 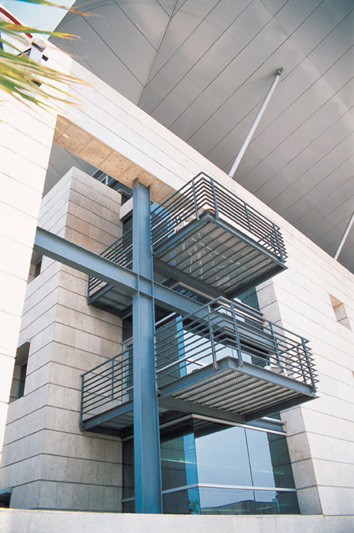 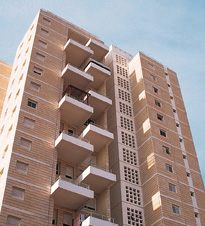 Since its invention during the early stages of evolution of architecture, the balcony has been a significant architectural component. Its shape, size, finishing, materials and in particular its relation to the adjacent spaces of the building, precisely express the architectural code in its spatial, constructional, climatic and social meanings. Although the dictionary does not distinguish between the porch - a paved and roofed area adjacent to the house - and the balcony, they are essentially different.

Both involve space whose functional significance is to mediate between the exterior and the interior. However, the suspended balcony, visually related to the exterior but spatially detached from it, functions in a completely different manner. The balcony is not lacking architectural culture. In a warm climate it is open and ventilated; in a cold climate, it is sealed and glazed. It takes on different shapes and shades, bears cultural connotations, expresses social content and decorates the building.

Mostly, the balcony expresses the attitude of its architect and the personality of its owner. The Israeli balcony demonstrates architectural innovations and residents’ attitudes towards their surroundings. “Garden balconies”, “sun balconies”, “virtual balconies”, and “staggered balconies”, the latter a new phenonmenon of the 1990s, are only a few of the common types.

During the Eclectic period, the balcony was merely a decorative element; in the period of International Architecture, it came to represent “local” culture. In the 1940s and 1950s, the balcony functioned as a means of social interaction. In the 1960s, brisolae (vertical asbestos shutters) facilitated the expansion of the apartment. In the Brutalist period of the 1970s, the balcony was closed and reduced in size. And during the Postmodern period, it became a symbolic element in the detached envelopment of the building. Today, the balcony offers sophisticated solutions for the utilization of constructed areas, with the innovation of the “staggered balcony”, an open-air extension to the apartments living space, with each storeys balconies alternating, to maintain the open-to-the sky characteristic.

The common function of the balcony is to facilitate expansion of the living area and to enable activities which require a connection to the outside. However, the balcony’s architectural significance is of a much broader nature. Thus, its functions include provision of ventilation, protection from rain, and shading from the scorching sun, as well as a means for visual and verbal connection with its surroundings. Despite, or because of, its range of function, the balcony’s architectural significance is often overlooked, both in planning regulations and in day to day utilization.

In public buildings, balconies which in the past provided a platform for speech-making serve today as broom closets - or as improvised smoking areas for employees. In apartment buildings, the balcony’s function is more defined and restricted to two principal types: the service balcony adjacent to the kitchen or bathroom, used as a pantry, laundry or storage area, and the living room balcony, for hosting guests or to provide a relaxation area off the living room or bedroom. These two general types of balconies improve accessibility between the various rooms of the house. The service balcony connects the kitchen to the bathroom, while the living room balcony provides a shortcut to the main bedroom. However, changes in lifestyles and in planning provisions for constructed areas mean that architects now focus on the visual and verbal connection, usually resolved by “cul de sac” balconies.

The most significant phenomenon in the recent evolution of the Israeli balcony was its growing absence, due to the failure to clearly envision its broad potential. However, the introduction of the “staggered” balcony was the inspiration of a former Minister of Interior, who amended building regulations to exclude such balconies from the calcuation of an apartments floor space (thus securing tax relief for religious residents whose needs are best served by the “staggered” balconies during certain religious festivals that demand spending time out under the open sky).

Planners, meanwhile, despair of the constraints of the “staggered” balconies which no longer function as protective or shading devices. Moreover, the inclusion of a “staggered” balcony adds significantly to construction costs.

Beyond its functional significance, the balcony holds symbolic and spiritual significance. Shakespeare’s “Romeo and Juliette” takes place mostly on the balcony, where a dramatic dialogue expresses the lovers’ longing and frustration at the visual closeness and physical separation the balcony reinforces. Other examples throughout literature have served as a model for planning “romantic” balconies which even, at times, face inwards, overlooking the inner space of the house. Within this framework functions the ‘scenic’ balcony, offering comfort and relaxation while observing the view. Its advantages stem from the most important spatial principle of the balcony which grants the ability to be indoors (in the private realm) and outdoors (in the public realm) at the same time. Thus, the user can enjoy one-sided interaction with his surroundings without committing to spatial realization of such interaction.

Recent research measuring the value of the balcony to residents and architects revealed that the balcony represents to the Israeli - regardless of religion, ethnic background, or social status - a means of satisfying functional needs, as well as a means of fulfilling cultural and spiritual desires. However, because the balcony is the window through which the homes educational, cultural, behavioral and spatial values are portrayed, there are differences in how the balcony is utilized. In the religious community, for example, the balcony and its users are concealed from the eyes of passers-by, while nature lovers express their longing for a garden with well-groomed greenery. Social beings line their balcony with special furniture, sunshades and plants. Those seeking only to relax tend to escape to their balcony and seclude themselves - all in accordance with personal needs and aesthetic preferences.

Where space within the apartment is in short supply, the balcony is closed with aluminum shutters or glazing, which replaced the brisolae of the 1960s. Where space is plentiful, the balcony may remain empty, abandoned and neglected. In neighborhoods of low socio-economic status, balconies are used mainly for storage or laundry, but when space allows, researchers found that these classes tend their balconies, sending out social and cultural messages such as tidiness, love of nature and warm hospitality. The middle class attitude to the balcony fluctuates between ostentatious grooming and demonstrative neglect. In religious neighborhoods with many children and young families, the balcony is strictly the children’s territory, where they spend their free time hosting friends and playing with toys.

The Israeli balcony’s heyday was the 1930s and 40s when it appeared in all its glory as a Mediterranean element, expressing in its size, proportions, relation to the sun’s rays and wind direction, the local aspect of International Architecture. The monotonous balconies of the 1950s Ministry of Construction’s housing drive reflected the anonymity of the housing block, almost identical in the northern Galilee, the southern Negev Desert or in the central urban areas. The Postmodern architecture of the 1980s succeeded in freeing the housing blocks of their anonymity, but canceled out their uniqueness as a local element.

Thus, the balcony may be seen as an architectural component which holds cultural value, reflecting the social status of the resident and his relation to his surroundings. The regulatory incentive towards the building of open balconies free of “religious limitations” which today dominate the building scene in Israel, should contribute to the more efficient utilization of outdoor elements. Today’s balcony represents the most readily-available outdoor resource in our present-day surroundings.