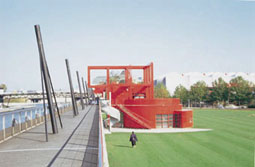 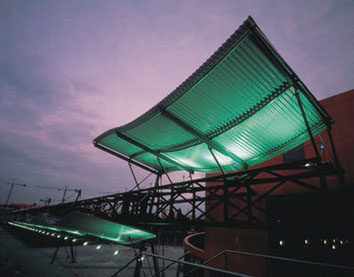 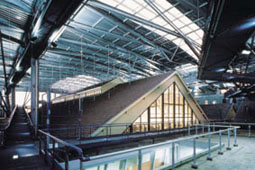 The year 1983 was decisive for Neo-Avant-Gardism, as Rem Koolhaas and the American-based Swiss architect Bernard Tschumi competed openly in the final phases for the commission to realize the Parc de la Villette in Paris as a prototypical urban park for the 21st century... Tschumi’s premiated design of 1984 drew its essential parti from three paradigms: from Eisenman’s Cannaregio proposal, from Wassily Kandinsky’s didactic ‘point’ line and finally from an approach to disjunctive spatial narrative related to the nonsequential cutting technique pioneered by the Soviet avant-gardist filmmaker Kuleshov.

The Kuleshov Effect was discovered by the Soviet filmmaker, Lev Kuleshov, in the 1920s. He placed identical frames of the actor Ivan Mazouchin between scenes of different events and asked viewers to describe the actor’s facial expression. They interpreted the frames in accordance with the nature of the adjacent events, although the actor’s facial expression had not varied at all. Kuleshov proved that two shots projected in succession are not interpreted separately by the viewer; in the audiences mind, they are integrated into a whole. This discovery of “narrative editing” was later developed by Eisenstein and Pudovkin, both students of Kuleshov, as the “Attractions Montage” technique.

Swiss architect Bernard Tschumi applied these same principles to his entry for the contest for the planning of Parc de la Villette. Soon after the contest, Tschumi was appointed chief planner of the site which includes passages, bridges and gardens for which he gained international recognition. Completed in 1998, the complex encompasses a number of dramatic buildings like the Museum of Science and Technology, a rock concert hall, a 19th century hall for exhibitions and the ‘Cite de la Musique’. Tschumi “edited” the buildings of the complex as a fragmented sequence of urban components, enabling the local pedestrian to conceive them as a continuing story, based on his own subjective translation.

Professor Tschumi taught at the AA in London (1970-79), the Institute for Architecture and Urban Studies in New York (1976), Princeton University (1976 and 1980) and the Cooper Union (1981-3). Since 1988 he has been Dean of the Graduate School of Architecture, Planning and Preservation at Columbia University in New York.

Tschumi is considered one of the most important theorists architects of recent decades, and his work has received much praise and publicity throughout the world. He was in Israel recently to participate in the Jerusalem Seminar of Architecture. He exhibited his works to the accompaniment of music and visual effects, in line with his cinematic perception of architecture as a generator of events.

The concept of the cinematic served a successful platform for your work at Parc de la Villette. To what extent is it still relevant to your work?

In the early days, the cinematic was a popular trend that represented - and in a sense still does for me - the dynamics of movement through space. At the time, there was the theoretical aspect which was fundamental. Just as architects were looking at the history of architecture for a starting point for their work, I was inclined to look at the theory of film as a starting point. I was quite fascinated by montage theory, that is how you assemble to create certain effects, like Eisenstein’s “montage of attractions”. In other words, looking at cinema as other people were looking at paintings, and trying to derive architectural concepts. Later, after La Villette, I understood the strength and the limits of those analogies. Then the ideas expanded in a more general sense, within the frame of program, activity, and events in space.

At La Villette, when I spoke about the cinematic promenade as a series of frames organized in sequences, the ideas were a form of manifesto. Later on, it became integrated into a novel set of other issues. Take for example the Le Fresnoy building, where the in-between space is in a form of montage of attractions, although not necessarily with the cinematic analogy. Very often in early works you use certain things literally; that is no longer the case.

One could say that there has been a shift in the phases of your work. If we examine the different techniques of your vocabulary, both in terms of form and material as well as organizational skills, could we define this current period as a new phase of your work?

You can put it in terms of evolution. Once you’ve explored something fully, you are not going do to it again. I am not in the business of product commercialization. Hence, I have always refused to do another park. I will probably not do a building with a roof on top of new and old structures, because once you’ve explored something, and you are satisfied with the result, you move on to other concerns. If you are not happy with the results, then you do it again and work on it. In this sense there are concepts that develop from one project to the next. Either the concept developed as a starting point and it is applied in the work, or occasionally it is the other way around - you do first the work and then you derive the concept.

You have emphasized the most important aspect for your understanding of architecture as the movement through space - not as a static condition. The emphasis is thus on the person moving. Where is the discrepancy between architects claiming to invent space or on the other hand reveal space? Could it be that we are back to the cinematic, and space simply exists without designers?

Yes, indeed, it simply exists. But what surprises me is that architectural theory and architectural history generally suppress that movement through space. It existed at the time of Palladio, it existed long before. But, if I read a book about architecture, especially if written by an architectural historian, it will show a history of styles and facades. It will never speak about the motion of bodies in space.

The pursuit of Modernism at the turn of the century had an integrated agenda of both new forms and economic considerations for building the clean, pure geometries of a new vision. The new architectures proposed today are still working with a building industry of materials and labor which has not caught up to the complex geometric forms of the current expressive movement. Could one say that this new free investigation of Modernism is rather a symbol of the expense of their construction?

Expense can be understood as either money in terms of product and materials or sometimes in terms of time and labor. These are very different. In America, for example, where labor is expensive, you waste an enormous amount of material that is cheap over there but expensive here. Everything is relative. In terms of the building, architects never have as much money as they need. They always have to make choices. If they had as much money as they need, I think the result would be rather bad building. A building needs prioritization, not limitations. Rather like in writing you need editing. Some ideas are simply more important than others, you can not put everything down. So in this respect editing is fundamental to architecture. Quite often a lack of resources may mean that you will be inventive in one part of the building and very normative, and even conventional, in others. This resulting tension between the normative and the extraordinary is interesting.

It has to. The building that we just did in New York, the Lerner Center at Columbia University, is just that. The suspended glass ramps and special curtain wall are the extraordinary elements; the rest of the building is rather normative.