New Phases Of The Elongated Space at the Kimmel-Eshkolot Practice 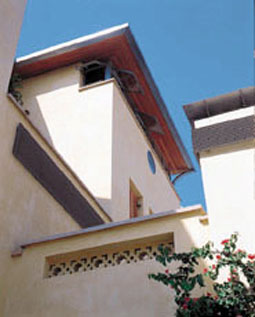 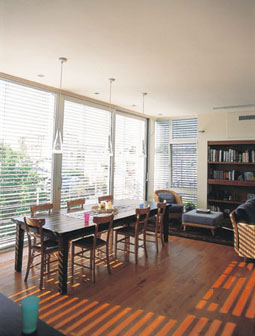 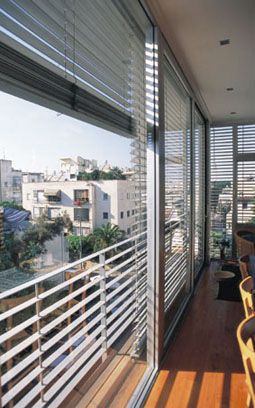 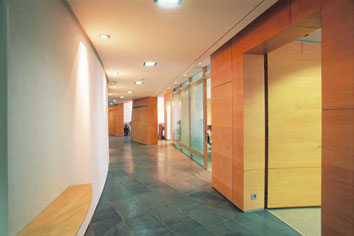 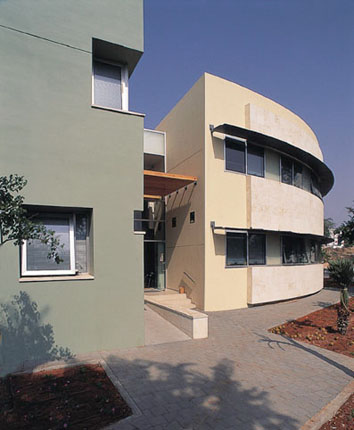 The narrow, elongated spaces of Neve Zedek, one of Tel Aviv’s earliest neighborhoods, serve as the basis for the development of the offices of architects Kimmel-Eshkolot. The houses are built on narrow long strips of land, with shared walls and only two light directions, giving rise to the vertical space concept expressed principally in the section plan. Construction within the section was a result of the development of the house upwards, and the utilization of the roof for light. As a result, a well-lit and ventilated space was created, producing a combined interior-exterior space.

One of the first buildings designed by Kimmel-Eshkolot was the Neve Zedek community center. It demonstrates the ongoing tension between the restrained exterior contour and the liberated interior space. The building, originally a hostel for community visitors and used to house immigrants and refugees, was abandoned during the eighties. With the neighborhood’s renewal at the beginning of the nineties, a decision was made to rehabilitate the building for use as a community center. The exterior facades were reconstructed, and their solid, massive character was preserved. To strengthen the building’s relation to the inner courtyard and its established ficus tree, parts of the building were replaced by a glass wall with a wooden skeleton. A hanging steel ceiling penetrates the wall, accentuating the tension between the light and the heavy.

A house in Arsuf, a free standing private house on the clifftops north of Herzliya, gave the firm an opportunity to go beyond the existing building’s limitations, yet still preserves the architectural character of Neve Zedek. There, the small courtyard was opened up, split and granted new interpretations, in accordance with the specific coastal climatic conditions. The building’s dispersion throughout the site and its spatial orientation maintain its relation to the natural surroundings.

Climate awareness played a key role in the planning of a school on a military base in the Negev Desert. Here, as in Neve Zedek, the building’s exterior blends with the texture of the other standard buildings, but demonstrates architectural freedom in its interior. At the center of the building is a shaded courtyard sealed with massive walls with a partition of blue perforated GRC (fibre-glass reinforced concrete). The partition is the traffic axis through which all transits pass. The courtyard is open to cooling breezes, but can be closed on its northern side against sandstorms.

Kimmel-Eshkolot’s experience is well demonstrated in the showroom and offices of “Finish” furniture manufacturers. The project, completed six years ago, was conducted in parallel with the   planning of Kimmel-Eshkolot’s own offices in Neve Zedek. Similarities are prominent in the finishing materials and experimental office furniture.

The two projects provided sufficient preparation for confrontation with the “image architecture” of the offices of financial consultants in the “Beit Rubenstein” building in Tel Aviv.

The elliptic space dictates an inevitable conflict with the spatial situation, forcing the architects to devise a more rational solution: a spatial division with orthogonal grid which created versatile spaces, allowing the application of minimalist design. The selection of a design concept based mainly on woodwork echoes a familiar feature of the Neve Zedek neighborhood.

The welfare office in Kfar Shalem, the   first building of a new civil complex designed by the firm, illustrates the architects’ ability to free themselves of existing restraints. A combination of three blocks encloses a bright atrium, in which the traffic and reception areas are concentrated: a green cube enclosing the office spaces and administration offices; a long narrow rectangle in which the treatment rooms are located; and a circular building which encloses the atrium and defines the building’s entrance approach. The designation of the stone as a suspended coating and technological material, and not as a massive building material, is emphasized by its disjointed elevation from the ground.

Ben Adaya Square in Jaffa was planned at the beginning of the nineties within the framework of a municipal programme to develop public areas as a catalyst for restoration of residential buildings. The square is symbolically based on the traditional Arab house. Pedestrian traffic is directed around the square on ramps, the stepped walkway penetrates the square. In this way, the open area is divided into plateaus at varying levels. While restoration of the square failed to impact significantly the development of the surrounding houses, it did stimulate Kimmel-Eshkolot to tackle the anonymous cube-like identity of the typical Tel Aviv apartment house.

The building on Mendelshtam Street   emphasizes the multi-purpose function of the balcony, by blending the living room and the balcony into one open living space. Electronic shades and versatile opening devices offer controlled use according to varying needs, without detracting from the building’s facade. Accentuation of the building’s entrance with a steel bridge was yet another means of overriding the Tel Aviv cube concept.

The residential building on Zvi Shapira Street demonstrates exceptional treatment of the section, creating two-floored apartments with inverted sections. In a building on Lapin Street, the balcony breaks the accepted rules, projecting its structural change outwards.

Kimmel-Eshkolot recently won a closed competition held by the City of Tel Aviv for the planning of an educational complex in Tel Baruch, a north Tel Aviv suburb. The 14-acre complex will include an elementary school, high-school, dormitories, community center and an auditorium. The suggested solution is again based on the work-in-section concept where activities take place on two levels, to facilitate public transit without infringing on regular activities. This project was designed in collaboration with the Dutch architect, Hans Davidson.