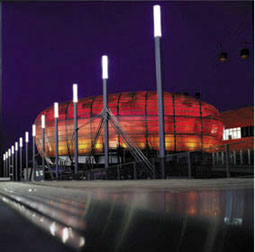 In their heyday international architecture exhibitions served to promote anonymous architecture and stimulate real debate. Today, the level of the exhibition is determined by multimedia shows accompanied by computer games, which banish any attempts at a different presentation.

Of the two recent prestigious international exhibitions - the Venice Biennale and the Hannover Expo - it is hard to tell which is more popular. While Venice has the advantages of a tourist city, Hannover has almost no tourist attractions. Yet Expo claims some 27 million visitors over the last four months, and is still counting. The comparatively low attendance at the Biennale, despite curator Fuksas’s declared intention that the exhibition is “aimed to a broad audience”, would indicate a degree of failure.

Both exhibitions clung to the now-tired concept of the new millennium. Expo, with this year’s theme as “Man, Nature and Technology”, granted more architects the opportunity to realize themselves. The buildings erected for the exhibition will remain standing like Montreal’s Habitat, or are to be replicated in new locations elsewhere in Germany. At the Biennale, on the other hand, architects were compelled to function within limited space, which dictated the focused menu of technologies and innovations, without becoming enslaved to the theme title.

The theme of the seventh architectural Biennale - The City: Less Aesthetics, More Ethics - ruled out in advance any chance of individual outstanding expression, and leant heavily on manipulative computerized simulation. This medium grants less talented architects the power to impress, as long as they are partnered by experienced computer graphics designers. The fascinating beautiful catalogue is rich with possibilities not yet realized in day-to-day life. However, as a medium of documentation  post-exhibition, the catalogue is of limited  use.

The highlight of the computerized multimedia show was the creation of curator Massimiliano Fuksas and Doriana O. Mandrelli, assisted by three directors, Italian television, and the European Space Agency. On a huge five meter high, 280 meter long screen, scenes of a megapolis from every continent were transmitted by 39 hidden projectors, illustrating the transportation which rules our lives, mega-malls and garbage heaps. It is interesting that the curator’s own show, its noise and lighting effects imposed poor conditions on other exhibitors. The critical question: Are these the ethics to which Fuksas was referring in the exhibition title Less Aesthetics, More Ethics?

In contrast to the open field for the on-line competition for planning the city of the future which was given a respectable billing at the Biennale, the exhibitors were mainly limited to Fuksas’ circle of close friends. Their projects were scattered throughout the area, at the entrance to the main hall and along the Talking Heads Boulevard, illustrating each of their personal “I believe” stands through an unflattering photo on a fluorescent background.

A word of praise: Among the prominent exhibitors at the Biennale, worthy of mention was Jean Nouvel, who deservedly received the grand prize for his fascinating investigation of forms in the low budget residential building “Mimesis”, in the French town Nimmes in 1985. The Canadian booth featured Melvin Charney’s 232 pages of collected newspaper cuttings, which he has cataloged over the years to draw attention to the fact that architecture reaches the front pages only when disasters occur. The USA exhibited a breathtaking technical exhibit of all that is available to an architecture student in the investigation of form and the execution of models. Three architects from Australia created a utopian city of millions of postcards, each featuring a different architectural word. Germany presented panels of photographs and plans of Berlin at different stages of its development. Ilia Utkin in the Russian booth showed melancholy photos of destroyed buildings for which he was commended.

A social word: At both events, the gap between rich and poor exhibitors was prominent. It was ridiculously obvious at Expo, where some countries’ booths were equipped with out of date 14-inch screens, peering out from within prefabricated boulders. In sharp contrast were the “progressive” countries’ booths, with added impressive multimedia spaces. France and Germany went even further, and reached new heights in a computerized combination of sound and movement, while granting the visitor a total sensory experience.

The most humane exhibitions were six groups of building remnants for refugees and war victims, planned by the French engineer, Jean Prouve (1901-1984), during the war, and in several variations during the fifties. The buildings were created in his workshop and assembled in different sites around France. A mobile building project for the homeless was presented by Krzysztoff Wodiczk, an MIT professor, who exhibits political art in various countries. The buildings, tested and approved by the homeless of New York, are capsules on wheels which may be extended or reduced according to needs. On a similar theme, Gary Chang, the Hong Kong-born prize-winning glass designer, built a construction of 36 netted cages under green light, a symbol of the exposed prostitution areas in Hong Kong.

A word of connection: The Dutch architects MVRDV link the two exhibitions by presenting a rest area at the Biennale, and at Expo, a site which makes for tired visitors after a climb of 40-meters to see screens of flowing water. The 18-meters high exhibit “Floating Forest”, is made of a forest floor with a greenhouse of blooming yellow flowers heated by solar energy collectors placed on the roof.

A word of criticism: At Expo, the prize for insulting one’s intelligence goes to the Bertelsmann communications booth, who define themselves as messengers of the media world. In an impressive elliptic building, they exhibit (after a three hour wait) two low-rate movies on the history of print and the passage to media, in which a Moslem child stars and wins a golden coin for an answer on the internet.

A word of religion: The real star at Expo is the booth dedicated to Jesus, defined as The Soul of Expo, a Protestant church planned by architects Von Grecken and Marge for the Glass and Metal Manufacturers’ Union. The space is surrounded by aquarium-like walls, filled with light bulbs, discs, bolts, forks, and syringes. The booth attracts audiences of all religions, despite the glass cross towering above it.

A word of conclusion: Dominique Perroult presented illuminated pictures of segments of his projects, and appears in the background on a monitor with the right question: “Why Ethics at the Price of Aesthetics? We need both. Let us work in peace”.