Beer Sheva in the Age of the Train 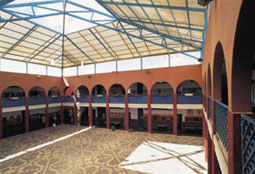 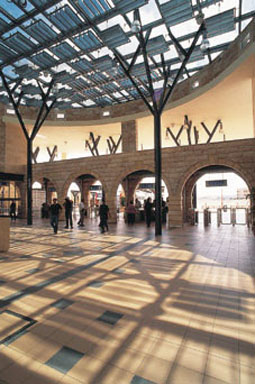 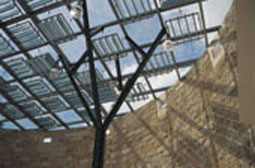 Beer Sheva in the Age of the Train

Beer Sheva, capital of the Negev desert, lies only 60 miles from Tel Aviv. Until recently, getting there involved a long and annoyingly circuitous road trip. The opening of the long-awaited railroad directly connecting the southern town with the central part of the country is a major event in the lives of residents. It also presented us with an excuse to conduct a periodical field trip.

During our last critique of the city two years ago, a local architect stated that residents long for “Tel Aviv Architecture” in their town. Beer Sheva architects, he claimed, prefer to create architecture that expresses the desert connection, taking into account the town’s hot climate, the extreme changes in temperature, dust and desert sandstorms. Our question, what is the desert connection, was almost unnecessary, as the buildings we visited were mostly adorned with arches and colorful finishing materials, perhaps under the influence of the Israeli buildings constructed for the Bedouin population which encircles the city.

These days, the Bedouin population represents a real threat to residents who are forced to pay protection fees to the Bedouin to prevent damage property, especially in the new neighborhoods of Omer. Perhaps this difficult social situation, together with the longing for advanced architecture, have influenced the gradual desertion of the symbolic “Arab” concept, and replacement with a more modern character. The move is expressed mainly (as in other places in Israel) through the dismembering of the constructed mass and a different spatial distribution. In this respect, the most encouraging aspect of the new architecture in Beer Sheva is demonstrated through the development of variations of the traditional inner courtyard, found in many of the houses in the Ottoman city, and its broadening into the urban field. This is expressed in the “patio architecture”, which has considerably improved reference to open spaces, a reference evidenced widely in neighborhoods such as Neve Menahem, Neve Zeev, and Ramot.

Planned by the Ministry for Housing & Construction, these neighborhoods which were designated for low cost housing, were developed by their planners to assure residents’ privacy. The traditional elongated terraces interlaced as an integral part of the building grant the facades qualities of light and shade, while relieving the monotonous appearance so characteristic of the older neighborhoods.

As climate awareness develops, there is more controlled emphasis on reasonable shading facilities, proper ventilation, and intelligent utilization of the qualities of light. Attempts to create streets with longitudinal building such as the traditional building in a uniform line, have been feeble and many streets have failed due to their orientation being determined arbitrarily, such as the facing of a long facade towards the west, with dangerous exposure to direct sunlight in the summer and vulnerability to rainstorms and hail in the winter.

Much attention has been paid during recent years to the finishing materials of buildings, however, they do not necessarily improve the appearance of facades. The local ordinance which demanded that buildings be coated with hard materials - stone, marble or mosaic - is on a level with the faulty instruction given in past years in Tel Aviv, which created loud and tasteless buildings coated in mosaic. On this matter it is important that policy makers should know that plaster has undergone many evolutions and its quality today is as good as the more expensive, and always appropriate, stone. Here the obvious problem is a lack of definitive consistent dictation of the choice of coating materials, such as the stone successfully coating many buildings in the city’s old quarter, which probably contribute to the justification of the city’s status as “Capital of the Desert”.

Even controlled application of climatic principles would contribute to the creation of a unique design platform. Adoption of the Standard 1045 for insulation of residential buildings at the end of the eighties served to improve comfort levels for residents, yet in a way eliminates the significance of the local climate. What differentiates a building in the green, northern Galilee hills from one in the arid Negev desert? The few examples here are not flawless, but definitely point to a gradual change deserving of attention.