Third Millenium Trends- Its All In The Message 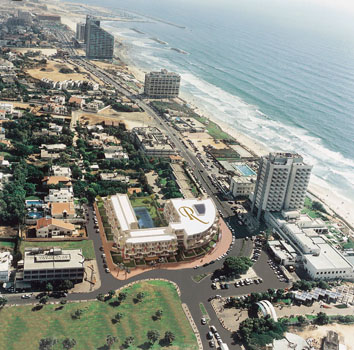 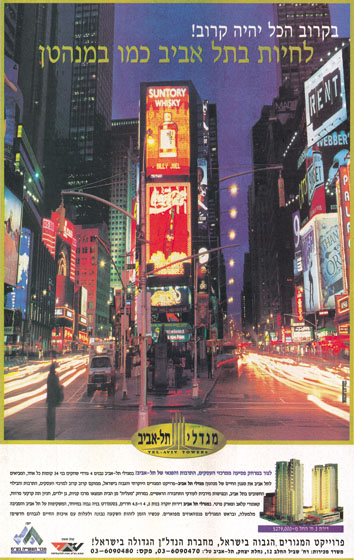 National and local newspapers are flooded with advertisements promoting the sale of houses and apartments. The content and attitudes revealed in their frantic sales pitches clearly express the scant value assigned to architecture. The ads’ slick copywriting and fanciful messages pay little attention to the architectural structure. No sketches, no models, no technical specifications to give the potential purchaser a hint as to the quality of the construction, the design, or the architect.

Is the Israeli consumer not at all concerned with the architectural product for which he is about to put himself into debt for many years to come? Or does the marketing strategy reflect a third millenium trend, a new reality in which clients immediately subject their purchases to all-encompassing, personal makeovers, as soon as the keys are in hand?

Perhaps the most prominent feature of third millennium architecture (which many are attempting to define), is the stripping of constructional images and a redressing in fanciful costume. New terminology fills the real estate ads, compelling the potential purchaser to put his reading comprehension skills to the test to decipher the term 'home'. Perusal of these ads is a frustrating experience that challenges the intelligence. But most of all, these ads reveal a complete ignorance of the creative process of architecture.

Classification of promotional material according to their conceptual messages provides food for thought. First, it is obvious that the focal themes in the advertisements are characteristic of the times. No doubt they are the fruit of 'in-depth studies' and marketing theses that have persuaded the construction companies as to the rightness of the idea - after all, there are a great number of advertising agencies in Israel, all competing for a slice of business. The question is, what causes social fantasies to take the place of technical details, plans and even enticing simulations of buildings? In recent years most sales ads focused on the secondary values of a building (wind directions, ceramics in the living room and bathroom). Now, the focus is on extras that serve to improve the buyer’s social image with his neighbors.

The Israeli consumer is presented through the real estate notices as a slave to what’s 'in' and what’s 'out'. A sophisticated being, with a passion for art, music, a landscaped view (preferably “English”), and a sense of humor, the prospective purchaser dreams of a house near the sea, blue skies, and a piano playing at the top of a hill on a path leading to nowhere. An adjacent spa or a health club next-door are taken for granted, and, in particular, the neighborhood must have a foreign name. The new home must echo of a different place - the top of a grand tower, or a little house on the prairie - far away from the uproar of the city, while offering easy access to the 'center of things'.

Obviously, these ads are not meant for those eligible for public housing. Subsidized  housing does not need to be wrapped in colorful words or sharp marketing strategies. Then who do these expensive advertisements address?

A quick review of the texts reveals that fully 62% of the countrys citizens believe that their lives will be a failure if they do not fulfill 'the dream of a private house surrounded by a grass lawn, a garden and a doghouse'. No reference to real life, that real grass needs watering and that Israel is in a water crisis. The ad designers blind us with green promises, and reduce the buyers’ decision-making to the breed of dog and the shade of wall plaster. Less fortunate potential consumers are forced to fulfill their own dreams in apartments, albeit in prestigious tower-blocks.

Marketing conventions dictate that the ads must be full-color, at least one full page, with an advantageous placing within the newspapers’ pages. An initial saturation campaign is followed by several weeks of reminders in more modest formats. The images compel the reader to define himself, or in return to adopt an image to aspire to. The language of the texts is mostly in masculine form, and not only due to Hebrew rules of grammar. The sales pitch is based on the - erroneous - assumption that Israeli men are the decision-makers. Only as an afterthought is 'everyone invited to visit the site. In my experience, such important decisions as to where the family will live are ruled by the women of the family. Thus the inclusion of pictures of attractive girls in poses more suitable to perfume ads is puzzling. Similarly confusing are the pictures of  'happy children'. If the well-being of children matters to the developer, why is any reference to sheltered playgrounds so often absent from the promotional materials?

The relation between design and caption - whose humor is this?

The potential buyer is represented as appreciative of a good 'view', emphasized by the  recurring use of green (grass), blue (skies), and azure (clean seas) as basic colors for the ads. To bring the message home, rippling waves and feathery clouds are added as graphic elements. The color green expresses calm and tranquillity but also hints that 'our' grass is greener.

Sometimes we find a small photograph of the building (underlined by the warning - 'for illustrative purposes only'), that blurs the thin line between dream and reality. The illustration may vary according to the target audience. The warning appears of course, due to legal cautiousness, so that the buyer can not complain if reality does not match up, and for the same reasons, a glossary of terms connects the tempting headlines to the fine print.

The English language plays a starring role in manipulating the images. Ornate lettering is used to describe the name of a site in English. The key words are anything that expresses the terms 'rare', 'luxury', 'prestige', 'classic', 'stunning', 'spirit of the times' 'fresh air' and 'atmosphere.”

Each ad contains an average of five sentences, combining thirty superlatives and ten commas. The apartment, the house and the site, are reduced to a series of slogans, disconnected from the place and the product. The ads vary only slightly in regard to what is being sold - industrial buildings, commercial offices, holiday apartments or investment estates. 'All the extras' are offered by 'our' product in contrast to competitors.

The collection of advertisements reviewed for this article all ignore the fact that home purchasing in Israel is a uniquely difficult experience requiring a financial commitment that demands long term planning. The messages are designed only to excite the customer and to stimulate his fantasy-life.

There are no technical specifications, not even for industrial buildings, though the blanket phrase 'rich technical specifications' often appears. Equally curious is the claim that the building is of the 'highest standards in the country.”  Whose standards? The Ministry of Construction’s? Another riddle facing the potential buyer is the actual size of the item on offer, which in this case, does indeed matter. The average area of an apartment in 1999 was approximately 105 square meters, according to Ministry statistics. Yet the advertisements declare “average” to be merely 82 square meters.

The main messages in this category are: 'An apartment in London is worth more to you'; 'Ramdor new-age communications opens the Internet era with managing projects in the field of construction'; 'Nature as the marketing agent for Amit Gardens' or 'Hadar Modiin, a perfectly planned neighborhood whose original architectural design was inspired by the Mediterranean quality of life'.

This group is principally based on impossible situations. The apartment complex 'Sea and Sun' on the Cliff Beach in Tel Aviv, has been on the edge for a few years now. However, the subject of the ad is a man in a suit lying on a loveseat on the lawn, from which the public beach at the bottom of the cliff cannot be seen. The caption promises a health club, jacuzzi, sauna, squash courts, a culture and events center, synagogue, cinema, restaurants and a huge lobby leading to the seafront walkway. Who has any time left to sit and listen to the waves

The messages here focus on the magic of a bird’s-eye view. It is difficult to say where in the country such towers can be found, because the ads all use the same jargon, such as: 'Luxurious towers above a huge park', 'dreams and pampering' and 'Your neighbors are already enjoying themselves'. Although this ad features a little girl floating in the air with a huge smile and naughty look, the green on the neighboring page appears to be even greener.

The use of art for marketing is exemplified in the 'To be or not to be' advertisement - only five minutes away from the Gesher Theater. A construction project in Jaffa is 'adjacent to the Center for Stage Arts'.... even the street names express art - Leonardo De Vinci, Mogdiliani and Bezalel

Among the slogans that supposedly bring a smile to the buyer’s face, we find: 'Dream neighborhood', 'Living the Millennium', 'these ads were not meant for you', 'Ramzor guarantees to change the rules of construction', and 'You are in invited build your dream house on your own.” There are also actual jokes: 'A doctor, a lawyer and a professor meet at the museum, and then later in the elevator', and  'The people are the ones who make the place, or maybe its the place that makes the people?'

Many years have passed since Jaques Tatis cinematic satire 'Mon Uncle' dared to try and settle accounts with the bourgeoisie who seek to 'stun neighbors and friends.” Mon Uncle has made a great comeback in our lives. Real estate advertisements in Israel  relate to the consumer as a gullible sucker. The ads have created a Hebrew real-estate language that any self-respecting dictionary would reject. Because the ads sell a dream, there is no actual building or plan, and there is no need to name the architect, although the advertising agency is sure to name itself and the developer gets top billing. Identifying contractors is easy (Gindi Towers, Kalka House, etc.). Soon, they will be named as the planners of the buildings, too.

Not long ago, a paper was submitted by the writer of this article to the Minister of Culture, Science and Sports on the need for legal integration of culture in Israel.  Architecture, it was urged, is an artistic creation, to be legally protected under consumer and copyright laws. The name of the architect should be declared for every building and in every advertisement of their architectural products. Adoption of such policy would only serve to elevate real estate advertising in Israel, and, hopefully, lead to an honorable reference to the role of the humble architect in the creation of buildings.