From Frank Gehry To Hans Hollein Via Bruno Zevi 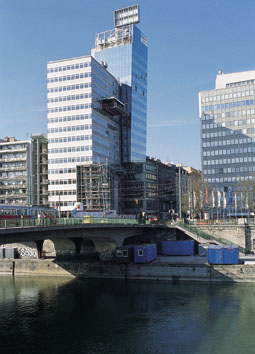 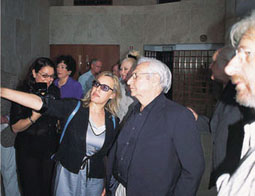 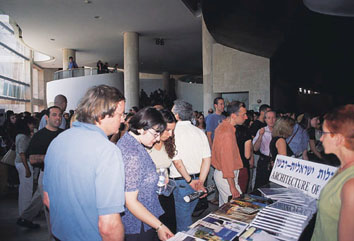 At a recent ceremony to honor the memory of Bruno Zevi, the hordes of architects and students crowding the Tel Aviv Opera House paid homage both to the late architect and to guest speaker, Frank Gehry. 'The inspiration for the special style of my buildings comes from architect Hans Hollein,' Gehry told the audience.

The Austrian Hans Hollein, born 1934, is a creative force whose work goes far beyond the boundaries of architecture. Holder of twenty-three international prizes, Hollein’s professional record spans the solving of ecological problems on an urban scale, interior planning of theatrical spaces, and the planning of museums and various exhibition spaces. As the regular curator of the Austrian pavilion at the Biennale in Venice and other exhibitions, he has challenged central themes of architecture. In Japan, he is consistently rated among the ten most influential architects in the world.

In 1972, he became famous for his 'media line' in the Olympic village in Munich, where pipes and pergolas united the cluster of buildings, forming a whole and identifiable system. At the Venice Biennale in the same year, he presented a chair on a raft and a tent on a bridge. The thematic exhibitions which he has curated since have borne thought-provoking names such as 'death', 'human tradition', 'work tradition', 'human and anti-human', 'bread' and 'paper' - themes whose execution have set new standards for spatial design, with 'the presence of the past'. Spin-offs and repercussions of these exhibits have continued to reverberate in architectural creations ever since.

The breakthrough in Hollein’s architectural career came in 1960 when he established a team of conceptual architects which included Walter Pichler and Gustave Peichel. A number of galleries in Vienna and Feigen Gallery in New York, planned in 1969, spearheaded a new style of industrial design. Their rounded edges and polished surfaces soon became the design hit of the seventies. Hollein and his colleagues deny the importance of practical restraints and even of actual building, preferring to produce exquisite drawings of conceptual projects.

When the Moenchengladbach Museum of Contemporary Arts was inaugurated in 1982, the German town became a site of pilgrimage. The building marked a significant change in how the relation between exhibition space and space division was viewed. A string of buildings that appear detached from each other, scattered on a hilltop, are assembled into a wholeness that cannot be disturbed. Holleins unique solution proved itself again in the Frankfurt Museum, built on a seemingly unworkable triangular site at the heart of the city.

The Volcania Museum in France, now under advanced stages of construction in St. Ours-les-Roches, represents a summation of all his ideas. A narrow passage, delving into the ground as a huge cone, invites the visitor to experience the entrance in the depths of the earth. Gold sheets of metal are planned to coat the surface of the cone, to emphasize the 'eternal flame' that will burn in the space, and adding to the dramatic tension generated by the theatrical scenery of the building. Hollein sees the museum as offering the visitor a personal and emotional experience in the spirit of the times, instead of just looking at representative exhibits. In contrast to the traditional fixed route through the museum, Holleins visitor is allowed to chose the course he takes through the various constructions. “The purpose is to draw the visitor into a mysterious underground world, in a primal and unfamiliar atmosphere.”

When the international competition was announced in 1994, the term ‘European Volcanic Center’ was not clear to any of the participating architects. Innovator of the idea, Giscard dEstaing, aimed to create an interactive tourists center in an area rich in unique volcanic landscapes but lacking in employment opportunities for the locals. The proposal presented by Hans Hollein was based on a fundamental change in the traditional attitude towards museum design, offering a series of alternatively open, closed, opaque and transparent exhibition spaces, scattered around a square. Opportunities for viewing include a huge three dimensional screen, located in an open space.

As a holistic architect, Hollein grants equal importance to constructed space and happenings on the exterior. The sequence of passage through each different space enables the visitor to include or exclude as he sees fit, in accordance with his own personal perception. In this way Hollein tries to increase the number of random opportunities for interaction, and enable the visitor to feel comfortable even when a work of art does not interest him. Holleins perception is a critical expression of Modernism which he terms 'a dogmatic moralist attitude.' According to Hollein, this attitude creates often perfect buildings, but with strict and extreme definitions that have to be broken. 'Pluralism provokes an atmosphere of openness and enables the creation of spaces freed from all strict legitimacy.'

Hollein relates that when he arrived in the U.S.A. to continue his studies at the Massachusetts Institute of Technology, he asked Mies Van Der Rohe which buildings are the most difficult to design. 'A church and a bar.' Mies replied without hesitation. 'These two spaces can not be planned on the basis of space division only - in both the atmosphere is the central point of interest,' says Hollein. 'You hesitate even about the number of candles to be placed in the alter corner and their impact on the space. The work of Modernists such as Van Der Rohe, which is greatly made up of functionalism and minimalism, creates spaces that are uncomfortable.'

Despite his battle to free architecture from the chains of Modernism, Hollein does not perceive himself as a Post-Modernist. 'Quotes of historical elements are not to my taste, I use shapes and colors for a needed purpose not as a method. The breaking of the strict laws of Modernist Architecture brought openness to new languages and attitudes. It does not necessarily put everyone in the same style category.'

A Hollein project currently under construction is the main branch of Interbank in Lima, Peru. In this project, located in a foreign and unfamiliar cultural environment, Hollein experienced a special connection between his personal architectural language, the local stone, and the extinct Inca culture. His plans for the building, with inclined lines and transparent facades, were the subject of public debate, and influenced the final shape. Its location at a road junction in the central part of the city grants a long distance view of the construction. Its main front is partially hidden by a huge screen of titanium plates.

Public debate of Holleins work goes on, and at times goes too far, in his opinion. Hollein cites the controversy surrounding the Haas building in Vienna as an example of excessive public debate. The site chosen was the famous Stephanplatz city square, where the impressive ancient Gothic church is located. A stormy debate went on for two years, in which Hollein tried to convince the Viennese public that the familiar square would not be damaged. Despite the difficulties, Hollein still believes that public debate and criticism is essential around every public project. 'Those who live in the place have the right to be involved in the decision.'

The Generali Insurance Company office building on the outskirts of Viennas old city demonstrates Holleins urban-architectural attitude. The building, on the banks of the canal, is divided into three main blocks of different shape and size. The stone covered area reflects the stone facades of the surrounding buildings; the steel and glass represent a view of the future; and the defining lines of the building follow the canal, retreating from the street line to form a square, and stressing the importance of the public space.

For the planning of a museum and gallery in Southern Austria, Hollein received a prestigious prize. The buildings are part of a culture complex including a concert hall, entrance lobby, a library and workshops which connects the city to a new quarter. The panel of judges emphasized Holleins success in integrating the two new buildings in the existing complex. His achievements in these projects is expressed mainly through his ability to create a system of horizontal and vertical passages, that organize accessibility to each building in the complex, without damaging each ones independent existence.

There is no doubt that Hollein deserves some credit for being the first to bring the use of new colors and materials to museum design. However, the dismantling of the traditional monolithic structure of the museum was seen much earlier, in the Israel Museum planned by Al Mansfeld. Holleins uniqueness is expressed in the way he dismantles and reconstructs the buildings components. His conceptual attitudes have influenced the structure of contemporary art museums built by world renowned architects. In the event opening the Guggenheim Museum in Bilbao, Frank Gehry paid tribute, saying, 'Without Moenchengladbach there is no Bilbao'.

See illustrations up to page 55