The Silence Of Bet Gemal - A Harmony Of Naive Simplicity 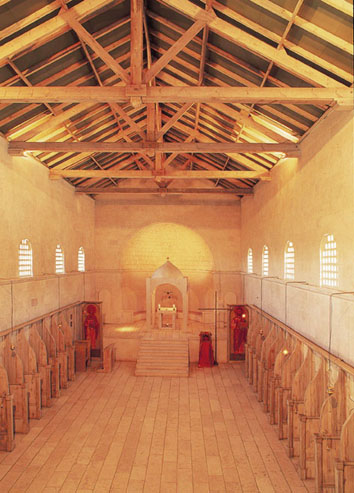 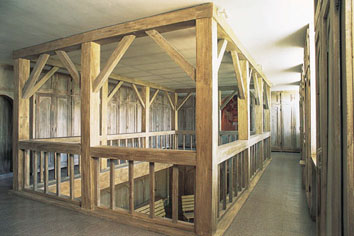 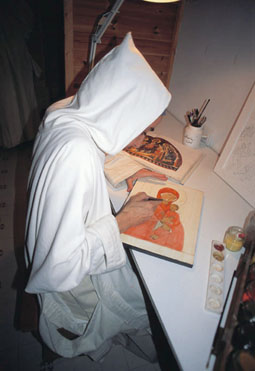 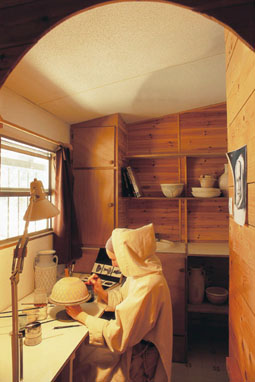 THE SILENCE OF BET GEMAL

While seclusion from the world in closed religious communities was common practice among Buddhists seeking enlightenment as early as the sixth century B.C., today, the majority of the world’s monasteries are affiliated to the Christian Church. Since the earliest days of Christianity men and women have been drawn to a life of solitude, sacrificing family life in order to devote themselves to God.

To an outsider, the relinquishment of life’s pleasures may seem irrational, entailing a life of giving without receiving in return. But to the monk or nun, isolation in a social wilderness offers the possibility of unification with God, in a life-long partnership in which God is portrayed as the beloved spouse. There is historical evidence that groups of monks lived in the Judean Desert as early as the first century B.C. However the earliest written record of monastic communities were left by pilgrims who lived south of Mount Sinai in the year 250 B.C., in the vicinity of Mount Horev - identified by Christian tradition as the site of God’s meeting with Moses.

Around 300 A.D., Saint Macarius established  at Faran, north of Jerusalem, the first 'Laura', a monastery in which the monks conducted a largely solitary existence within a closed community framework. Each Laura consisted of a number of caves or isolated cells, with communal facilities occupying a central position, the most important of which was the house of prayer. There, the monks would assemble on Sunday mornings to pray, eat and converse. On Sunday evening each monk would retire to his cell, taking sufficient bread, water and work materials to supply his needs for the rest of the week. It was during this period that Hilarion and Criton established monasteries in the area of Bethlehem, and Saint Anthony settled in Egypt.

The spread of Christianity brought the monastic tradition to other regions. Monasteries became extremely popular destinations among pilgrims in the Middle Ages, who created religious communities around them. The Crusades also brought new functions to monasteries, which indirectly served the expansion of Christendom. Monasteries also began to collect offerings brought by pilgrims for the more revered monks. Accordingly, a monastery’s size reflected the prestige of the religious order that it belonged to.

A basic distinction developed between contemplative monasteries and monasteries which took an active part in the life of the community through teaching, voluntary work in hospitals and charitable assistance to the weak and needy. However, the principal influence on the architecture of a monastery was the degree of communal activity between the monks or nuns themselves. In some monasteries the residents lived in complete solitude. In others, they combined solitude with periods of shared activity or lived in a wholly communal framework. Since a monastery is, by its very nature, cut off from its surroundings, the most common programmatic feature of a monasterys design is the central inner courtyard (cloister), around which the inhabitants private cells and the monastery’s communal facilities are arranged. This pattern, which by its nature allows seclusion from the outside world while opening toward the inner life of the community, derives from the ancient way of life in the original desert monasteries.

In order to understand the spatial organization of the monastery, it must be remembered that the monks’ daily schedule is divided into periods of solitude and periods of communal activity.  Solitude is for the purpose of prayer and private contemplation. A round of seven daily prayers forms the basis of life in the monastery. Five of these prayers are recited by the monk in the solitude of his cell, and twice a day the monks meet for common prayer in the monastery’s chapel. While there is a clear distinction between the parts of the monastery dedicated to solitude and those used for communal activity, the overarching importance of solitude is reflected in every aspect of the monastery’s architecture. For example, the interior organization of the chapel differs from that of a parish church. Instead of a central prayer hall, facing the alter, each monk has a separate prayer cubicle, where he may pray at the pace that suits his personal needs.

Most monasteries in Israel are located in Jewish areas, and because the law prohibits missionary activity amongst the Jewish population, monks and nuns are effectively prevented from providing voluntary work in local communities.

Within the monastery, a monk’s status is determined by the level of commitment he has made to the monastic way of life. A novice monk or nun first undergoes a period of self-examination, indeterminate in length, until reaching the conclusion that he or she is ready to dedicate a life to God. A transition period follows, until the abbot or abbess reaches the same conclusion. Only in the third phase, after the monk or nun has resolved all inner conflict, does he or she take lifetime vows.

The monastery of the Sisters of Bethlehem at Bet Gemal is located on the hilltop site of a first century Christian settlement, south of the modern Jewish town of Bet Shemesh. The Monastery belongs to the order of the Monastic Family of Bethlehem and the Assumption of the Virgin of the Church. The order was founded in France in 1950, and today includes more than 500 monks and nuns, located in 30 nunneries and 3 monasteries in 11 countries. In 1973 the order adopted Saint Bruno as its spiritual patron. Bruno founded the Chatreuse Monastery near Grenoble in 1084, modeling his monastery on the ancient Laura tradition. Bruno’s adoption by the Sisters of Bethlehem indicates their belief that the ancient Laura tradition provides an appropriate model for a life of contemplation within the framework of a monastic community. Accordingly, the nuns have sworn a vow of silence, spending most of their time alone in their cells, in work and prayer, while eating two meals a day only.

Despite the decisive role of solitary activity in their lives, the nuns do provide sisterly companionship to one another, and in times of need they are assisted by the Mother Superior or the more senior nuns. Following ancient tradition, the nuns meet on Sundays for a communal meal, which is eaten in silence while a passage is read from the holy scriptures. After  the meal the sisters break their silence during a nature walk, which is followed by informal discussions on various religious matters.

In Christian tradition (unlike Jewish tradition), beauty is regarded as an integral aspect of the liturgy. Considerable thought and effort is invested in the construction of Churches, so that they may express the full glory of the spiritual realm. In contrast, monastic life is based on introspection and a minimization of needs. This raises the question of why so many nuns, who have dedicated their lives to prayer, also engage in artistic activity. The answer is that seclusion from a life of material pleasures does not dull the need for aesthetic expression. On the contrary, the creator who is engaged in a quest for spiritual sources of inspiration is able to enrich his or her creation with fresh ideas.

The uniqueness of Bet Gemal Monastery lies firstly in its design and construction, which was undertaken by the nuns themselves, and secondly in the continuous artistic productivity. The nuns support themselves by their artistic creativity which includes ceramic design, sculpting, and furniture-making. Every detail of the monastery expresses a restrained symbolism, a minimalist desire to avoid the superficial or superfluous. The architecture of the monastery is not functional in the customary sense, i.e. it is not based on utility of design, but on a ceaseless searching and thirst for spiritual  experience. Thus  the building can be seen as an unfinished symphony that combines spiritual and material elements in a harmony of almost naive simplicity.

The most conspicuous design flaw in the monastery at Bet Gemal is the convoluted route of access. From a conversation with nuns who participated in the planning of the building, it seems that the problem derives from the planners’ inexperience and continuing attempts to remedy the error. However, the convoluted entrance also has ceremonial value, serving to separate the public entry to the complex from the nuns’ living quarters, which are accessible from the rear of the building, and thus protecting the nuns’ unique way of life.

The visitor arriving at the monastery is guided through a vestibule past a reception room, a handicrafts shop, a small lecture hall and a prayer hall whose design makes reference to an Islamic mosque. A beautiful arched corridor leads to the main hall, also arched, followed by another prayer hall, this time decorated with symbolic references to Judaism. From here the visitor can reach the galleries of the main church, by means of a stairway  and a long path that passes along the roof of the building. The route taken by visitors is calculated to surprise and delight, helping to remedy the impression that the building was randomly designed. In contrast to the winding route taken by visitors, the nuns use a shorter route to arrive at the assembly hall, the library located in its upper level, the church and their private cells.

The spatial organization of the monastery at Bet Gemal is characteristic of other silent monasteries, consisting of an upper house containing the nuns’ private cells and communal facilities, and a lower house where guests of the monastery are received. Due to a shortage of space in the upper house, the sisters have been compelled to convert a number of temporary structures, which once housed Jewish immigrants from Ethiopia, into additional private cells. Every detail is calculated to insulate the  sisters from their surroundings and enable them to unite with their Creator. The cell serves as both home and work place, where nuns spend most of their time in silence and artistic endeavor.

The almost Post-Modern style of the monastery, which was completed twelve years ago, is especially striking against the background of the other buildings at the site - a fifth century church and another monastery built more than 130 years ago. The monastery’s exterior is finished in coated stone (a contrast to the raw stone of the neighboring buildings) and the interior is decorated with wooden panels, painted a uniform wash.