Build Your Home While Youre Young 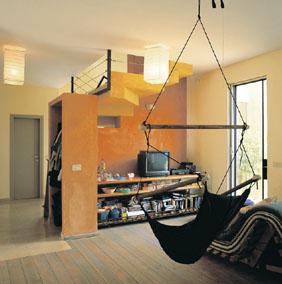 Build Your Own Home neighborhoods, once considered the epitome of all that is wrong in Israeli architecture, sprouted like mushrooms after the rain and allowed everyone to fulfill his own architectural fantasy. Along with styles inspired by imported magazines, 'Build Your Own' homes usually ignored surrounding constructions and the landscape, and any sensitive soul passing by was prickled by the proliferation of uncensored forms.

After harsh criticism, from us and others, we are finally beginning to see the buds of long overdue change. This is particularly so in a small number of second generation neighborhoods, such as those adjacent to the agricultural cooperative settlements of Kfar Hess, Rishpon and Michmoret. Is this Ideal Architecture? Not yet. But definitely a process that we can live with. The improvement is the fruit of the looms of a generation of young architects not raised in the International style, who have succeeded in developing a more local architecture. Credit is due not only to the young architects, but also to young home-owners who seek beauty but settle for what they can afford. And so this somewhat contrived architecture was born, based not on nouveau riches grandiose dreams, but on consumer and economic considerations.

What has happened? The young residents of today’s 'Build Your Own' neighborhoods hire young architects for budgetary reasons. The architects in turn make every effort to create something to be proud of. The results are still pretentious at times, but a recognizable succession of buildings - not necessarily in uniform style - has begun to take shape. The most prominent of these expressions is the abandonment of the concept of the white 'so-called' Modern house in favor of smooth colored plaster and its promise of long-lasting vigor. Instead of the familiar prickly shapes, there are fewer angles and less cheap vulgarity.

What next for the “Build Your Own”? The total absence of urban planning and lack of clear visual guidelines towards the creation of a cultured aesthetic environment, remain major stumbling blocks. Even in the presence of planning guidelines intended to prevent chaos, people do as they see fit. Paradoxically, these guidelines represent the root of the problem. The inexplicable obligation to integrate stone or Jerusalem stone in supporting walls for example, creates strident disharmony between the finishing materials and the streets aspired personality. The planner, attempting to create harmony between the fence and the building, causes discord with neighboring constructions.

A visit to the new neighborhoods of Mevaseret Zion, Rosh Haiyn, Modiin, or any other massive housing project, reveals the urban damage that directly results from inappropriate guidelines in the urban master-plan. The uniform model repeats itself and creates a boring and distant environment; behind these 'screening walls' the appearance of the house is of no significance anyway. Perhaps the most important message is that the style should come from the people and not from the architects. In spite of attempts to moderate individual expression, home-owners are still not prepared to settle for white or grey houses. The suggestion to return to Modernism, in the best-case scenario, or to Brutalist architecture, in the worst-case scenario, stands no chance.