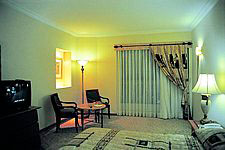 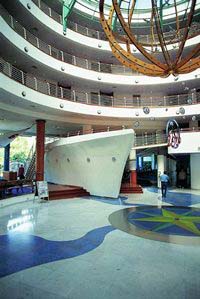 Far beyond their basic function as temporary homes, hotels are probably the greatest illusion peddlers of all

Far beyond their basic function as temporary homes, hotels are probably the greatest illusion peddlers of all. One hotel differs from the next, not only in the number of stars awarded by the various tourist authorities, but especially in its individual story. Hotel designers thus tend to adhere to thematic design in the strictest sense.

The development of an almost universally uniform functional model - a bedroom opening to a balcony or large window, with a bathroom at the entrance - leaves the decor as the principal means of individualization. And decor requires a background story. In addition to the desperate search for an attractive place of shelter, architectural truth - connection to the site, effects of construction, a sense of the materials, climatic conditions and context - is often lost.

In previous articles of AI (no. 25) we have mentioned the exotic plastic boulders that replace the red rocks of Eilat, the vast array of gimmicks that even the guests no longer take seriously. Reality, however, overcomes aesthetic criticism. Everyone enjoys escaping from everyday routine. We readily accept every illusion we are fed. An example of this trend lies in the chain hotels, whose architectural pride is in the hands of the designers. Chain hotels have evolved into 'designer products' in accordance with criteria dictated by fashion, just like 'designer perfume' - inflating the value of pure design. In such cases, architectural criticism is likely to find itself powerless, unless it succeeds in focusing on the dosage and the relevance of the illusion to the architecture and to the site. Most importantly, architectural criticism must focus on the ability of the final product to function in the long term.