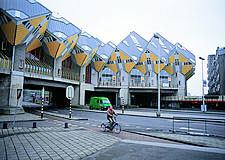 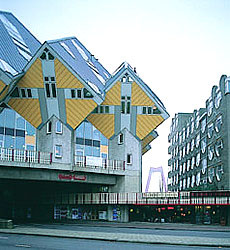 In the Dutch city of Rotterdam stands an architectural complex that is difficult to ignore: a housing block of formalist orien

In the Dutch city of Rotterdam stands an architectural complex that is difficult to ignore: a housing block of formalist orientation that provokes wonder. A series of cubes placed on their vertex, the Cube Houses of architect Piet Blom form a bridge above the former bed of the River Blaak, now a major transportation artery running through the citys center. Following Bloms death at the age of 65 in June 1999, the director of Arcam, Martin Kloos, wrote, 'Everything about this man was big.' His naivity was his weakness but also his greatest strength. A man of great social sensitivity, Blom was dedicated to building for the masses. Although the success of the Cubes project brought him world-wide recognition and several large-scale projects, he preferred to keep a low profile, and he continued to run a modest office, based mainly on his own work. A booklet he sent us two years ago displays his special projects in his almost childish hand-writing. Following Bloms sudden death, his son Abel Blom, helped us complete the picture

Piet Blom designed an earlier version of the Blaak Cubes in 1975 in the rural town of Helmond. He was not entirely satisfied with the results, particularly the social aspect, and when Rotterdam Municipality asked him to design a similar project on a bridge connecting another residential complex to the city center, he saw an opportunity to improve the concept. Thus the first residential units of the Rotterdam project were introduced in 1978. Budgetary constraints delayed construction until 1982, and the project was completed in 1984.

Behind these formalist projects stands a quaint story. According to Blom, during a town meeting in Helmond about the residential units, a local man stood up and declared, 'The people of this region dont need anything more than a tree to live in.' The romantic Blom took these words literally: the project is clearly a cubist depiction of a forest. The houses are built upon concrete brick 'trunks' and the paving between them resembles the forest floor. The bridge, often known as the 'Rotterdam Ponte Vecchio', functions in a similar manner to the street bridge of Florence. It attracts tourists from all over the world. In addition to the 38 families, another 23 cubes (including three big cubes) house the University for Asian Business Studies, and several offices.

The attractive Blaak Station and the coffee houses that have sprung up around it, contribute to the areas function as an important urban center. The style can be attributed to an experimental stream popular during the seventies, when the hunt was on for an industrial solution for rapid building. Piet Blom succeeded in taking it another step forward. In Israel, it was expressed in the diverse works of Sharon, Hecker, Goodovitch and Noiman. Sharon and Heckers residential project in Gilo remain examples of the experimental phase in that they were never developed further. Bloms complex, based on mixed use, is mature and complete.

Bloms idea was to create a village within the city, 'a communal oasis with a vital connection to its urban surroundings,' with small businesses, shops, cafes, a school, culture centers, and childrens playgrounds on the promenade floor, in view of the residential floor. While recognizing the great importance of community life, Blom understood that it could not succeed without external feedback. This he accomplished by properly combining residence, work, shopping, play, and by opening the project to functions not of the place, such as the university and offices. The large number of tourists who visit the architectural wonder are provided with a furnished cube from which they can observe and imagine the cubic way of life.

From a constructive point of view, the trunk of the building is composed of three concrete columns. The Cubes were originally made of coated wooden skeletons, with fiber boards (18 mm) on the inside, and rock wool insulation. The living quarters in the Cubes, the virtual trees, have various spatial implications. The placing of the cubes on their vertex grants the spaces particular interest and the residents enjoy an unusual point of view of the rest of the project and the outside world, through the slanted window. Living above ground grants the community a sense of security. Although in an urban setting, the complex is well maintained and free of the typical vandalism that occurs in areas unpopulated during working hours. The various uses, and correct relation between desirable closure and required openness, create a situation in which even during the day the complex is never deserted.

Life 'at an angle' is not foreign to the Dutch, a people famous for their ability to maximize use of space, to populate a buildings every corner, and even its attics. To offer variety in the life of a complex composed of repetitious cubes, Blom created three kinds of units, organized differently and destined for different purposes: two and three floored cubes designated as residential, and three floored cubes for public purposes. In the small cubes, the walls in the storage and the adjacent staircase rooms on the ground floor are made of stone, as opposed to the light walls of the actual cubes. In the large three storey cubes, the ground floor is used for residents. In one of the vertex is a kitchen and dining room; the bathrooms and storage area are in another vertex, and in the third, a study and work corner. On the middle floor, there are two bedrooms, a bathroom, and a small hallway. In the superior vertex of the cube, another room, in which the windows are high up. All in all, in every cube there are 18 windows and three portholes which allow for unique and interesting perspectives. The windows are double-glazed, reinforced with steel netting where necessary.

The project, worn out by the march of the tourists, was renovated in 1998.