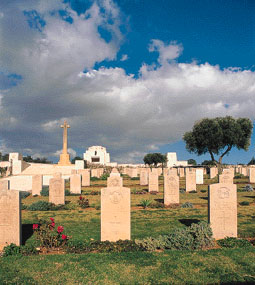 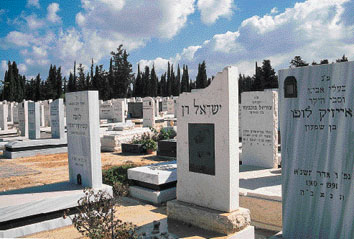 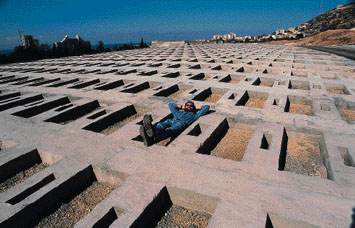 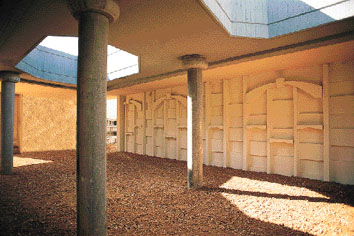 BURIAL AS A WAY OF LIFE

Despite the fact that death is one of the significant events in our lives, we have a tendency to put off everything pertaining to death till the last moment. The awe and reverence inspired by the subject impede any creative thinking on the topic and prevent its irreversible practical consequences from being taken into account. Even those who do not lead a religious lifestyle submit meekly to the traditional burial ceremonies and their spatial implications, which exacerbate the overall land shortage in Israel.

If we consider the following details, we will understand the scope of the problem. The mortality rate in Israel is 35,000 persons per year. Continuing to bury our dead by conventional means will require an allotment of 14 hectares (35 acres) of land per year. Given that most residents prefer to lay their loved ones to rest near their place of residence (even if this involves payment of a high fee to reserve burial plots), the shortage of cemetery space increases in direct proportion to the population density. In central Israel, where 70% of the countrys inhabitants reside, there is virtually no possibility of allocating additional burial plots. In Greater Tel Aviv, home to one-fifth of Israels residents, the annual mortality rate is 8,500 persons. The physical consequences of this fact would require the areas cemeteries to grow by 3.4 hectares (8.5 acres) per year ˆ an area identical to that of an entire square block in Tel Aviv. The practical result is that most cemeteries in central Israel are entirely full, including the new sites originally intended to serve the population in the next decade. The recently opened Yarkon Cemetery, which was planned to serve the residents of the Dan Region (Greater Tel Aviv), is filled to capacity, and there is an immediate need to locate an additional 60 hectares (150 acres) ˆ an area the size of a village! ˆ for burial purposes, to cover the next 50 years.

The prevailing method of burial in Israel is based on direct contact between the deceased and the soil, according to the Biblical verse 'For dust thou art and to dust thou shalt return'. Cremation, though admittedly economical and efficient, runs counter to the belief in resurrection. In such a situation, cemeteries become 'dead' areas which cannot be recycled for further use. The shortage of municipal cemetery spaces makes it more difficult to allot burial plots.

The solution therefore lies in development of burial methods based on a greater 'population' density.

The central problem facing planners is how to break through the psychological barriers of the Israel public, accustomed as it is to traditional burial ceremonies. In recent years, Israeli planners have developed models which now, on conclusion of the first stage of their implementation, appear rather promising. According to the vast experience acquired worldwide in this area, it may safely be assumed that these models will reduce the size of the land areas required, and even enable the renewed use of cemeteries which reached full capacity for conventional burial years ago.

The problem of population density is not specific to Israel. Various methods for saturated burial have always been adopted in many places throughout the world; some of these can easily achieve a density of up to four times that of conventional methods (including green areas and sites not intended for burial).

Burial in tiers (above and below ground) was practiced in Israel in ancient times. The use of natural or artificial separating walls between graves is known from the tombs of the Sanhedrin in Jerusalem; a later and more developed form of this practice may be observed at the burial grounds of Beit Shearim. After the the Sanhedrin Rabbi Yehuda Ha-Nasi was buriaed there, Jews from all over the world desired to make the site their last resting place, and the burial caves became an economic enterprise which helped the city become a thriving residential and commercial center. The burial caves (which do not, by the way, contain earth) enabled families to establish tombs, burying their dead in niches within the stone or in coffins; these stand in glory to this very day. Additional examples of burial in tiers may be found in the Jewish cemeteries of Prague, Vienna, Paris, Tunis and Rome.

The switch to the new method in Israel is evoking significant challenges for planners. While the old methods admittedly take up more space, the beauty of some of the more 'spacious' cemeteries cannot be denied. Assuming that the ecological difficulties can be effectively solved, the planners are now faced with a problem resulting from the requirement of Jewish religious law which stipulates that the deceased must come into direct contact with 'the dust of the earth'. This requirement has hygienic implications as well, and the Ministry of Health demands a space of at least 30 cm (1 foot) of unbroken land between cadavers. Whereas natural burial provides an immediate and effective response to this requirement, burial in tiers calls for the artificial creation of partitions of earth which eventually connect to the natural soil. One of the solutions is based on laying the deceased on a bed of earth arranged in the bottom of the niche, and having the funeral guests increase the depth of earth through the use of sandbags prepared in advance. After burial, the niche is sealed with a prefabricated element, on which a tombstone is set up according to the familys desires and taste.

Various saturated burial solutions are already in use in several places in Israel: the Har Ha-Menuhot Cemetery in Jerusalem, Sde Yehoshua in Haifa, the Holon Cemetery and the Kiryat Shaul Cemetery in Tel Aviv. Due to the shortening of the paths between plots, all models of saturated burial are characterized by ease of access, with some even located above the covered walkways used by the funeral procession. The problem of orientation common to cemeteries is also reduced, as the names of the deceased are listed on vertical walls.

The use of abandoned quarry sites or remainders of unusable land, whose real estate value is low in any case, is a current option as well. A plan recently filed at the initiative of the Israel Lands Administration provides for construction of a cemetery in the abandoned Bareqet quarry. The model proposed there is based on the use of the quarry walls for construction of burial niches in tiers, while preserving the topography.

The Israel Lands Administration has lately decided to allot areas for burial only if saturated burial methods are used. The cost of construction of saturated burial sites is higher and requires allocation of resources. However, given that this method saves on precious land, and that the shortened access paths give rise to significant savings in infrastructure, the investment in construction becomes almost negligible by comparison. The new method has been approved by the Ministry of Health, the Ministry for Religious Affairs, and the Planning Administration in the Ministry of the Interior. The Chief Rabbinate, keeping in mind the 'sanctity of the Land of Israel', gave its approval as early as 1986. Burial plots, after all, are considered 'unclean land', and their reduction leaves many more 'sanctified areas' for the Latter Day...