A Voyage To Bilbao 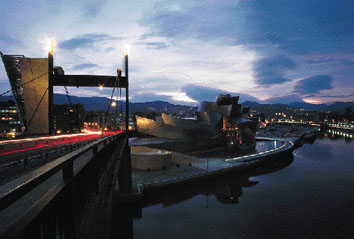 A VOYAGE TO BILBAO

After protracted cultural anorexia, I decided on a voyage to Bilbao, in order to see the renowned building that Philip Johnson has called 'the most important architectural work of the century'. Equipped with a quiver of critical arrows, I arrived in the Spanish city with the clear aim of 'debunking the myth'. The city of Bilbao, which the Michelin Guide gives only one star, is now viewed worldwide as an important tourism center. The question is: how did a boring bourgeois city become a focus of attraction for hundreds of thousands of tourists from across the globe?

The construction of Bilbao began in the 13th century, on the banks of the Nervion River, and developed into a thriving port city with an industry based on shipbuilding and trade. Its prosperity declined in the late 19th century, when the demand for shipbuilding dwindled and methods of marine storage changed. A contributing factor to this decline was the bombing of Bilbao in the Spanish Civil War (the city of Guernica is not far from Bilbao), following which the city has been undergoing massive restoration. Unlike other cities (such as Tel Aviv), a detailed recovery plan for the advancement of Bilbao into the third millennium and the post-industrial age has already been formulated.

The plan is based on the concept of two main channels of activity: renewal of the public transportation system and reinforcement of the cultural infrastructure. Restricted architectural competitions were held with a view to the selection of suitable architects, whose works would give the city buildings of both cultural and tourism-related value. A subway intended to connect the port and the fishing villages with downtown Bilbao and the suburbs was designed by Sir Norman Foster; a pedestrian bridge over the Nervion River was designed (naturally...) by Santiago Calatrava; a cultural center was established not far from the Guggenheim Museum by Serino & Palacios of Madrid; and the famous Guggenheim Museum itself was designed by Frank Gehry.

Of all these 'works of art', I have chosen to briefly 'attack' two central projects in the recovery plan: the subway stations and the Guggenheim Museum.

Sir Norman Foster, the architect who designed the subway system, cannot be accused of not having a consistent style. As an architect who adopted the so-called 'hi-tech' style, he succeeds in emphasizing the ways in which construction systems cope with gravity, creates sophisticated details involving steel connectors, and uses materials with an 'innovative' identity, such as stainless steel, glass curtain walls and precast elements of exposed concrete.

In planning the subway, the style is a by-product of the planning process. Foster placed the user at the center of the process, by contrast to the London Underground and the Paris Metro, which were planned as rational systems operating as claustrophobic canals designed to handle the flow of human masses. Fosters thought process was focused on increasing the efficiency of train traffic and improving the convenience of the passengers. The main idea was based on hanging the platforms above the rails, to enable the creation of a spacious, well-lighted waiting space. The platforms are suspended on steel constructions attached to the ceiling and the tunnel walls.

In Fosters project, a buried space becomes an esthetic experience. The esthetic design emphasizes the concept of penetration. The tunnels, covered with bare concrete prefabricated elements (1.20 x 2.40 m), open at the street level into an illuminated entrance structure made of stainless steel hoops covered in rounded glass. The residents of Bilbao call these entrance buildings 'Fosteritos' after the architect. The first subway line was inaugurated in 1995, and completion of the entire system is planned for 2011.

As for Frank Gehry, his main success derives from the astonishing way in which he succeeded in translating his initial sketches into a finished building which provides a true spatial experience without losing its spontaneity. Noises, odors, infinite views, play of light, textures, people, bridges, observation points and other unexpected components transform a visit to the building into a sensual and cultural experience.

By contrast to Foster, it is difficult to say that Frank Gehry deferred handling the style of the building to a later stage, as the museum fairly echoes with the identity of Gehry the 'sculptor'. One of the common complaints against Gehry is that his buildings could be constructed anywhere. In this case, Gehry himself chose the site according to his style. Like Moses in the Bible, he climbed a high mountain, looked down over Bilbao, and chose a location which serves a meeting point for the industrial zone, the Nervion River, the city center, and the Puente de la Salve bridge. The choice of site by Gehry was made even before the invitation of a restricted number of architects to the competition, including Arate Isozaki and Coop Himmelb(l)au. Frank Gehry was selected and began designing the building in 1992.

The building hall, completed in 1998, includes late stylistic developments which had already been reflected in other buildings designed by Gehry. Above and beyond the interplay of masses resulting from the complexity of the titanium facade, the ship motif intensifies the connection with the history of the site. Translation of the complex 'environmental sculpture' into a building required the use of computer software used in the construction of ships and aircraft. Measurement of the amorphous elements was performed with laser beams, enabling construction of the intuitive building at a relatively reasonable cost.

Despite the chaotic complexity of the mantle, the design of the inner spaces is rather simple: 21 galleries of various sizes, arranged on three levels, around a central atrium 50 meters high (2.5 times the height of Frank Lloyd Wrights Guggenheim Museum). The vertical connection is predictably accomplished by means of transparent elevators, as well as ramps and stairs.

The atrium is a lighted, basilica-like space, composed of several towers made of stone, white plaster and glass. The towers enable 'a peek under Marilyn Monroes dress' - a favorite theme of Gehrys, which he adopted in the National Nederlanden building in Prague. The atrium 'bombards' visitors senses with a profusion of stimuli which contribute to the enjoyment of the thousands of tourists who fill it every day: works of art which use the entire height of the space to produce sounds or send messages (such as Jenny Holzers work, for example). The atrium space includes ideas affected by Rouchenbergs 'Art Pauvre'; appropriately, Rouchenbergs works are now on display there. The strong feelings provided by the space generate a catharsis, which causes visitors to seek asylum in the clean, white, quiet display spaces.

Within the city space, the building functions as an environmental sculpture. Its amorphous shape gives it a different aspect from each direction viewed. The entrance plaza to the south of the museum welcomes the infinite lines of visitors and provides a vibrant meeting place. At the entrance to the plaza is a statue made of flowers, designed by Jeff Koons. The disassembled masses recall Mont St. Victoire, a silver cubist drawing by Paul Cezanne. To the north, the museum itself resembles an elongated ship sailing slowly under the bridge crossing the Nervion River. A smoke-wreathed concrete ramp follows the building to the north, parallel to the river. The ramp leads to a long staircase which climbs to an observation tower on the other side of the bridge. The famous coating of the building is worth every dollar; the titanium coating operates as a 'light-sponge', giving the building a different appearance every hour of the day and night.

Similar to the transformation undergone by its older sister, Barcelona, Bilbao has also 'taken itself in hand' and become an important international tourism and cultural center within less than a decade. The choice of two indisputably excellent architects again placed architecture on center stage. Both architects used projects to create urban dramas: Foster, in the design of the subway station entrance structures, which have become a symbol of the city, and Gehry, in his design of an 'environmental sculpture' which became no less of a city symbol than the Sydney Opera, Paris Pompidou Center or the New York Guggenheim Museum.

My voyage to Bilbao has inspired me and made me aware of my hunger for architectural events. I have no doubt that the requirement for architectural competitions before the construction of any new building which inspires public interest would contribute to the liberation of freedom of expression from the jaws of insensate bureaucracy - a phenomenon no less common in Israel than anywhere else on Earth.