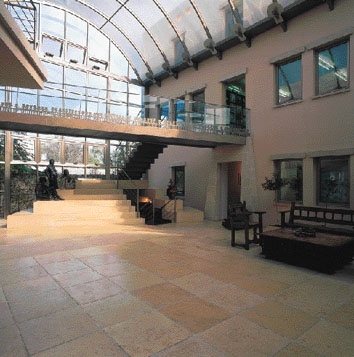 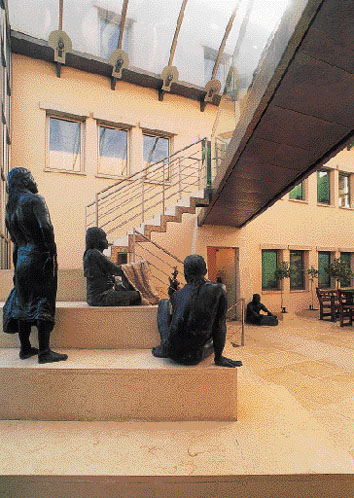 HOUSE OF THE SEASON

The Peruvian Consulate serves as the offices of the Honorary Consul of Peru in Israel. As a semi-official building, it constitutes a showcase of Peruvian culture and its historic strata, as well as a home for authentic collections: pre-Columbian pottery, Spanish colonial furniture and sculptures of figures casted upon living natives.

"Peruvian" shapes, colors, scents and tastes are reflected in a naive blend of imagination and reality. The Peruvian concept is expressed through quotations realized in the building details, materials and furniture. The Lines of Nazca - "landing strips" described in the film "Chariots of the Gods" - serve as guidelines for the design grid which starts at the entrance and concludes in the back yard.

The house is composed of two main sections, separated by a huge atrium covered in polycarbonate panels. A metal bridge linking the two sections constitutes an intersection between movement arteries. The horizontal artery, starting at the entrance, crosses the atrium like a runway terminated at a waterfall located at the edge of the back yard. The vertical artery starts in the basement and rises through a pyramid reminiscent of the huacas - a religious structure in which the pre-Columbian vessels (500 to 2500 years old) were found.

Peru extends along the eastern coast of the Pacific Ocean. Its natural scenery is quite varied: evergreen forests near the sources of the Amazon, sparse greenery along the high Andes Mountains, desolation in the Nazca Desert, and almost Mediterranean vegetation near Lima, the capital. The garden, which connects the Peruvian cultural contents with the Israeli location, contains pomegranate trees, olive trees, bougainvillea oats and cactus. Grapevines and citrus trees surround the house all the way to the back yard, which resembles the Peruvian jungle, with water and tropical plants.