Color As a Fonctional Entity 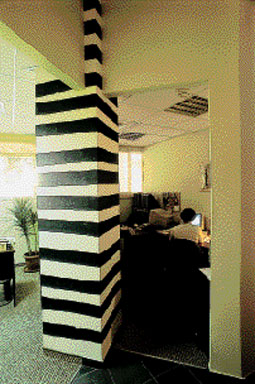 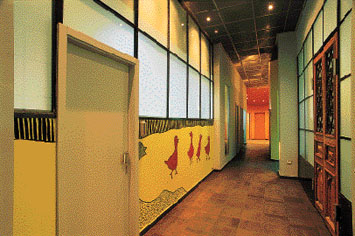 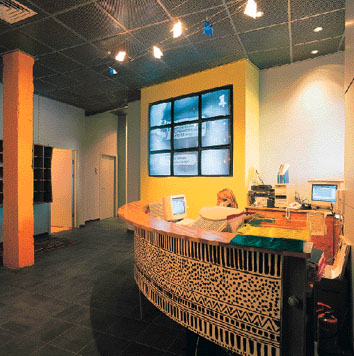 Color in architecture has always been viewed as a luxury - an ornamental element that can be done without. The most common definition speaks of color as an added value of function. The value of this 'external addition' is generally measured in emotional parameters, which describe the 'impression' of the color rather than its material value: a 'pretty shade', 'suitable', 'combines well', 'goes nicely with', and so forth. This emotional approach is based on emotional charges, experiences, memories, associations, and bits of individual or collective knowledge. The modernistic statement that color should be regarded only or mainly in an 'emotional' context actually runs counter to the way in which we perceive our physical environment. In actual fact, perception of color comes even before perception of form, as proved by the fact that children asked to sort objects tend to do so by color before even noticing form.

The offense against color is even greater when committed in the framework of modernistic architecture, whose guidelines are based on functional values as they appear in nature. Although the value of color in nature is definitely functional, the modernist approach has tended to encourage the 'purity of material' (van der Rohes 'Less is More'). A rather drastic step in this direction was taken by Austrian architect Adolf Loos, whose 1908 article 'Decoration and Crime' raised the (Fascist) argument that removal of all decoration from functional objects is vital to the development of culture. On the other hand, the romanticist Le Corbusier was more moderate. He actually stated that 'color is an integral part of plan and section... it is color which gives each element its heartbeat and the freshness of spaces... Colorful composition ranks planes and volumes in the order of their importance.' If the many interpretations of Le Corbusier had taken nuances into account, the majority of modernistic architecture would not have remained white.

In many cases, color is a primary functional element. Even when the effect is achieved through the material, emphasis by means of color significantly improves the spatial status of items (adjustment of distance, prominence, weight and mass of each component). The Dutch 'de Stijl' team, one of the forerunners of modernistic architecture, originated in Kandinskys attitude toward the connection between form and color. One of the better-known examples is the '1923 Architectural Project' by Cornelius Easteren and Theo van Doesburg, in which the planes of the facade were distinguished from each other by the use of primary colors - red, blue and yellow.

One of the 'corrections' made in the renewal of modernistic architecture (after the collapse of post-modernism) is reflected in a intensified use of color. The slogan 'Less is More' has been replaced by the slightly cynical 'Less is a Bore'. The use of complex color combinations and shades creates more exciting spaces, with the planner exercising more sophisticated control of the way in which components of the space are perceived. This approach is in line with the aggressive visual stimulation now characterizing reality, in which the stars are the TV screen and the computer monitor. In the flood of visual information, a vast effort is needed to focus the attention on the architectural messages and details of the individual building.

Present-day architecture is composed, on one hand, of irregular spaces in surprising arrays, and on the other, - of modular, flexible buildings with no definitive identity - has given rise to a new code of 'functional color'. This code is reflected in colorful highlights, which organize space in a way similar to walls or partitions. In these color spaces components of form and color interact harmoniously at all levels of the building.