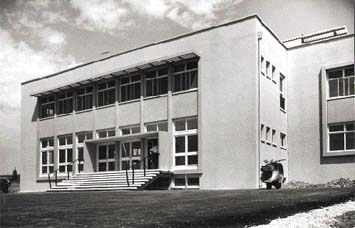 Theres a cynical proverb which says that architects spend their lives building their own monuments. The problem is that too many "monuments" remain anonymous, because most buildings do not record the architects name. This is especially true when architects are salaried employees, and the rights to their works under law belong to their employers.

For eighteen years, Gad Asher headed the Planning Department of Israels Public Works Commission. He formulated the image of Israels telephone exchanges and post offices, and designed, inter alia, the Meteorological Station at Beit Dagan, the Rehovot Courthouse, the Ben Gurion Airport terminal, Sde Dov Airport, Maasiyahu Prison and all of the Government hospitals erected since the establishment of the State of Israel and his death in the mid-1960s.

His early professional years in this country were spent in the offices of Erich Mendelsohn (prior to which, in Germany, he had spent a brief period working as an architect for the Berlin Postal Authority). During those years, he was involved   in designing the home of Chaim Weizmann (Israels first President) in Rehovot, Hadassah Hospital on Mount Scopus, and Rambam Hospital in Haifa. In 1940, he joined the Public Works Department of the British Mandate Government, where he was principally active in the design of police stations and schools (notably the Kadoorie Agricultural School) and later became the Deputy Chief Architect.

Upon the establishment of the State of Israel, Asher recruited architects, engineers, draftsmen and surveyors from among the influx of immigrants to the new State, and set up the Planning Department of Israels Public Works Commission, which he headed to the day of his death. In its early days, the Department included only four architects (none of whom, except for Asher, spoke Hebrew). The drafting tables were doors which had been taken off their hinges and converted. (Jean Cazas, in an evening commemorating Gad Asher, spoke of how, on entering one day a Government office in Tel Avivs Kirya complex , Asher pointed to one of the doors and said, "Look what nice doors. Lets take them!" - and they loaded four doors into their vehicle and drove away.)

The Departments first task was to convert the Kesem Cinema and San Remo Hotel into the first building to house Israels Parliament, the Knesset . Having succeeded at that task, the Department went on to grow and develop, its first years being extremely active and characterized by a pioneer spirit. The contribution made by Gad Asher - who had completed his architectural studies in Berlin in 1932, the height of international architecture - is reflected to this day in the simple, functional nature of Israels first public buildings, prominent for their lack of formal ornamentation.

Mass immigration to Israel, the poor health of thousands of Holocaust survivors, and wounded War of Independence veterans required the construction of more hospitals (Rambam Hospital in Haifa being the only Government hospital at the time). In the initial stage, it was decided to make use of the Quonset huts left behind in the former British Army camps and transform them into hospital wards. Gad Asher was sent to Finland, where in only a month he developed a standard model for the construction of prefabricated hospital wards. He returned to establish three hospitals: Tel Hashomer, Assaf Ha-Rofe (in Sarafand) and Beer Yaakov.

Rambam Hospital, one of Erich Mendelsohns most prominent buildings, was constructed in 1936. Gad Asher was the architect responsible for this project in Mendelsohns office; after Mendelsohns death, he also supervised the expansion project implemented by the British Mandate Government and the substantial expansion carried out by the Government of Israel in the 1950s. His return to these projects made Rambam Hospital "his" complex; his name was given to the old wing of the hospital - in what is, as far as we know, the only instance where a public building in Israel bears the name of the architect.